Shirtless Bear Fighter is probably my favorite comic series from the last few years. I loved absolutely everything about what writer Jody LeHeup created in that bonkers, wonderfully literal world, so I was excited to read through issue #1 of his next creation: The Weatherman. I was not disappointed in the least. While The Weatherman veers a little bit darker and looks to deal with some headier issues, it still retains the same wacky, cornball humor that put LeHeup on my radar in the first place!

The year is 2770 and humanity now exists on Mars. Something (we don’t know what yet) wiped out nearly all of humanity back on Earth and the population is still reeling from it and trying to get on with their lives. The titular weather man is named Nathan (so right there you know he’s gonna be a handsome, charming fellow) and he does his best to lift the viewing public’s spirits. He presents the weather on television, but does so with a flair that could be described as overly-wacky and near insane. If this were the real world, he would have been fired long ago, but in this world, everyone seems to appreciate his attempt to inform and entertain while attempting to take people’s minds off of the terrible memories they’re still nursing. 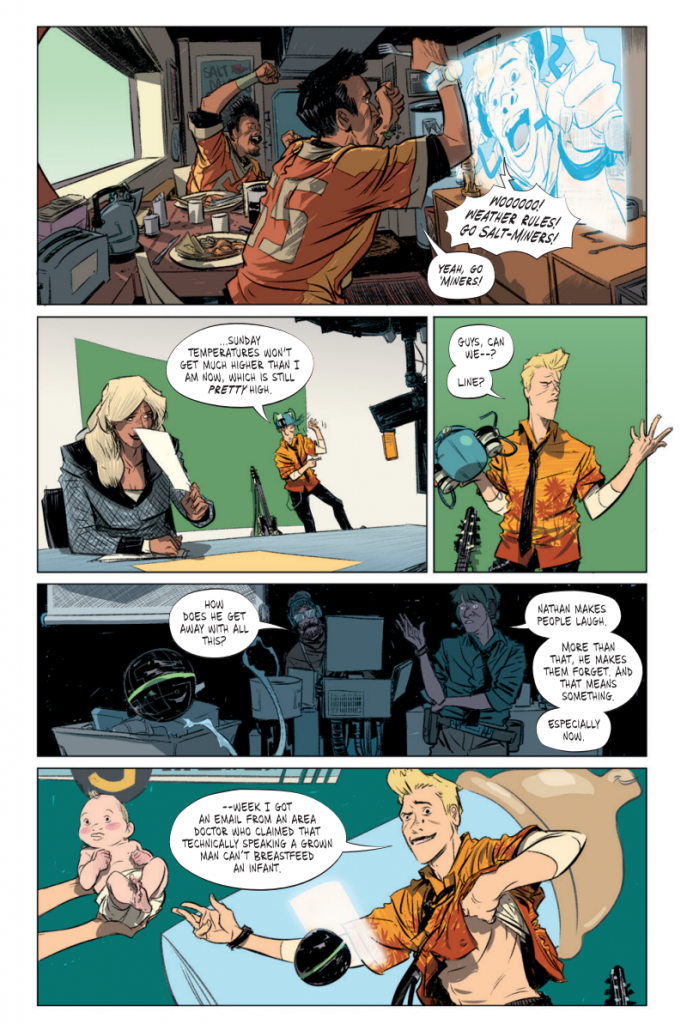 LeHeup has done a great job of writing a character who is over-the-top zany in front of the camera, but flawed and introspective away from it. Nathan is dealing with the pain by eating a lot and hanging out with his adorable yellow lab, Sadie. He also has a budding romance going on with a red head named Amanda who is also extremely well-written as a nuanced character who is dealing with her pain in her own way. It may sound like a sad, reflective drama piece and while there are certainly aspects of those things in this story, it’s presented in such a hilariously skewed way that it all plays out in a palpable way that leaves you smiling. And laughing. A lot.

In The Weatherman, like he did in Shirtless Bear Fighter, Jody Leheup has managed to expertly balance elements of both the heart-breaking and the wildly absurd into one great package. It’s that unexpected juxtaposition of these disparate tones that make everything else going on feel right at home when they might otherwise feel out of place. There’s undercover, covert operations, intergalactic bounty hunters, shocking violence, and more. There’s a lot going on in this first issue and it all mixes together like some fantastic gumbo. 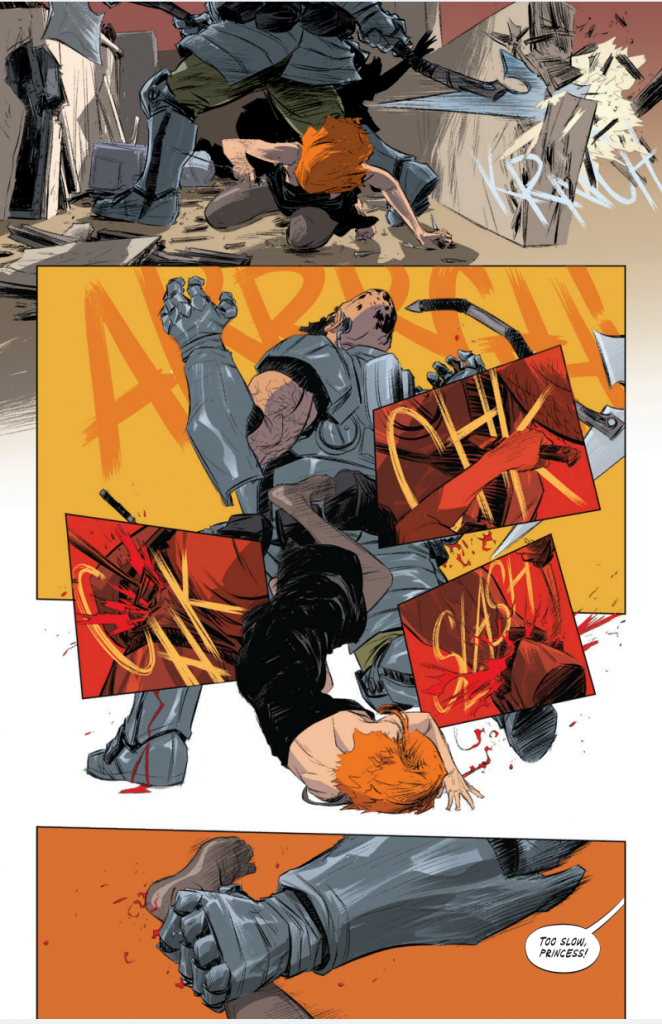 Nathan Fox (again, great name!) is handling the art here and he is bringing his “A” game. It is highly stylized in a very “comic book” way and it complements the tone (or tones) of the story incredibly well. The amount of detail and little jokes inserted into the background mean you’ll spend as much, if not more, poring over the illustrations as you do reading the dialogue. From top to bottom, this is a great looking book!

By the end of the first issue of The Weatherman you feel like you’ve been on some wonderful roller coaster and the shocking revelation on the final page will leave you both intrigued and impatiently waiting for the next issue. We’re promised that not everybody or everything is exactly what it seems in this world, and while that’s par for the course when it comes to comic books, I really wasn’t expecting the right hook when it came.

I probably don’t need to say this, but I really, REALLY liked this first issue of The Weatherman. I imagined I would when I saw who wrote it, but it exceeded my expectations. It’s exciting, hilarious, heart-breaking, and action packed. I know for a fact that it’s not for everybody (and really, what is?) but I wouldn’t hesitate to recommend this to anyone who enjoys running the gamut of emotions while reading your comics. You’ll be laughing one minute and gasping the next, but you’ll be enjoying yourself the entire time.