Well…. here’s a weird one, folks. From Image Comics and writer/artist Mirka Andolfo comes Unnatural. It’s a tale of a young lady, Leslie, who lives a pedestrian, but lonely life until she is beset by strange dreams of forbidden love. And also, the guy she is dreaming about is a wolf and Leslie is a pig. That’s not an indictment on her eating habits or her weight; she is a 100%, anthropomorphic porcine lady. And she’s in love with a wolf-man. Like I said, this one is a weird one.

Originally published as an Italian comic by Panini Comics, Image is bringing Unnatural stateside and for the first time, in English. As absurd as the setup may sound, the story is handled, surprisingly, with a straight face. The first issue reminded me of something you’d see on a Lifetime Original Movie, only with all the human actors replaced with animals. If that doesn’t sound like something you’d enjoy, then I’m right there with you, but for some weird reason, the care that Andolfo puts into her characters and the world they live in makes this story more enjoyable than I felt it had any right being. 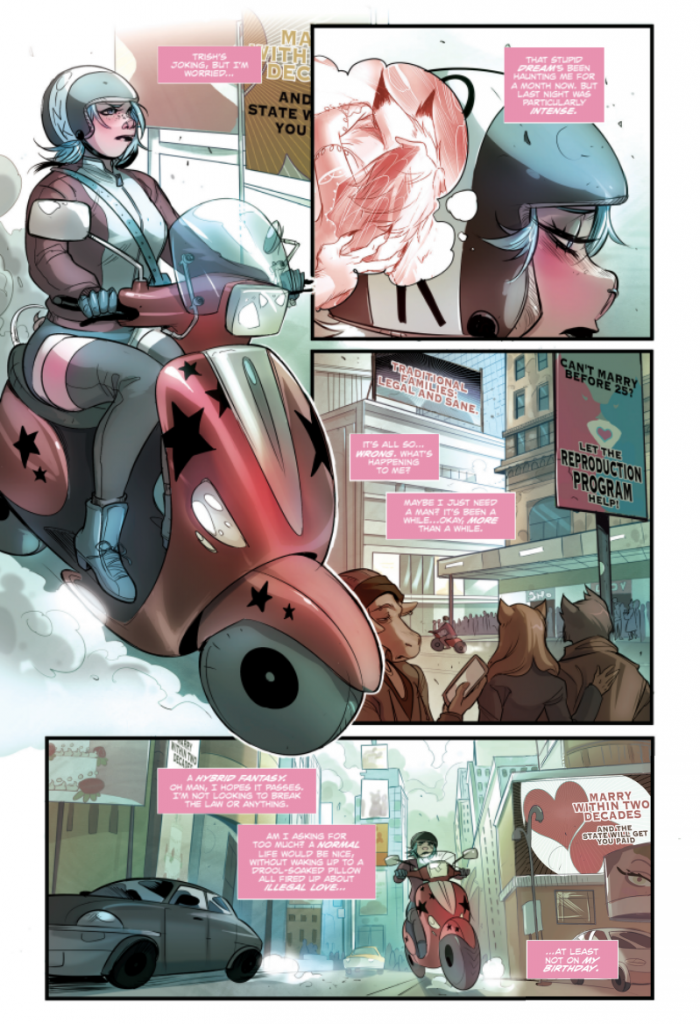 That’s not to say I loved it; I don’t. The messages it pushes are heavy-handed and eye-rollingly conspicuous. You see, Leslie lives in a world where inter-species relationships are illegal. The government pushes and forces the idea of “traditional” families onto the poor public and demonizes anyone who would rather “love who they love.” It’s just more Big Brother, conservatism-is-oppressive propoganda that we have seen A MILLION TIMES OVER! It’s not subtle either; not even a little. I don’t mind when these ideas are elements of a story, but when they are the full driving force behind it, it gets a little annoying. The world of Unnatural is one in which government and society support traditional ideas and oppress liberal ideas. That is the polar opposite of the world we actually live in.

Apart from that, however, I actually found myself enjoying the story, if not for exactly what the first issue presented, then for the potential that is there. There’s an underlying darkness to the whole affair. There’s a pervading sense of spookiness and foreboding that I appreciated and it’s what the book doesn’t explicitly say, as opposed to what it DOES explicitly say, that I found intriguing. 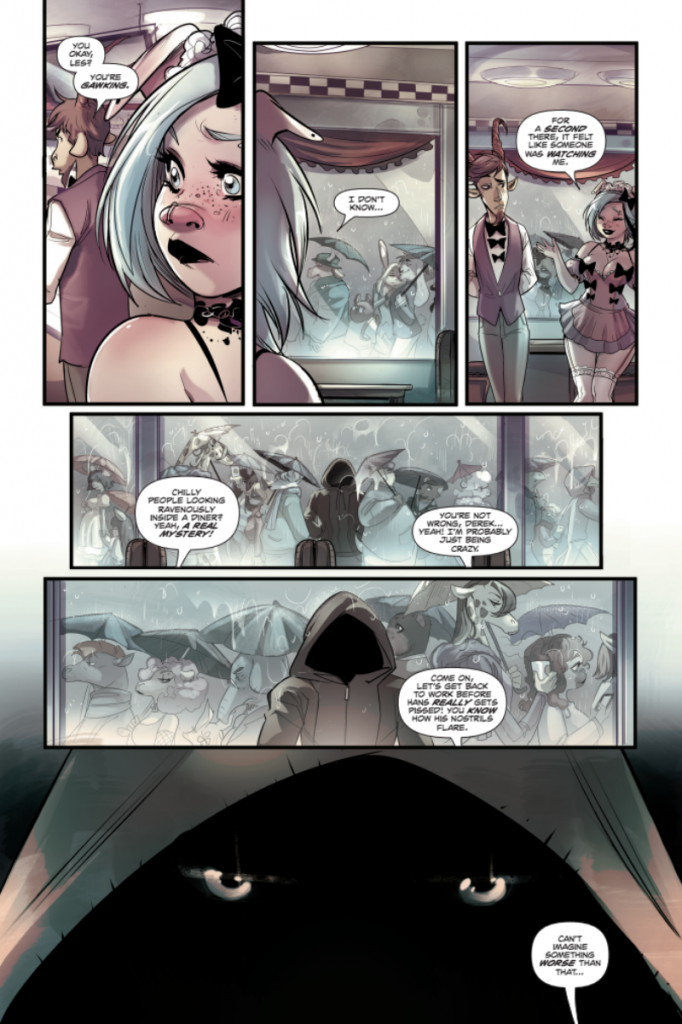 Leslie herself is a sweet girl who makes a great protagonist and is easy to identify with. As much as one can identify with a female anthropomorphic pig, I guess. The other characters don’t get as much page time, but most of them are written just as well, even though I found very few of them to be likable. I don’t think I’d enjoy hanging out with any of these people. Mainly because they work at a place called “Goth LOL”. Let the inherent silliness of that name sink in, why don’tcha?

The artwork that Andolfo has supplied for Unnatural is easily the high point of the story. Every panel looks like a big budget animated feature put to the page. From characters, to backgrounds, to texture and coloring, Unnatural is a beautiful thing to look at.

Well, that’s kind of it. I don’t know what to think about this book. Everything about it tells me I wouldn’t enjoy it, and there certainly is a lot that I do NOT like. I don’t care for how sexualized it is and I don’t agree with its social ideology, but more than that, I don’t like how that ideology is presented. That being said, however, strictly from a character and story standpoint, I am more interested in finding out what happens than I expected to be. While this first issue isn’t a high recommend, subsequent issue may prove to be.

Also, I’m pretty sure this book wants me to be sexually attracted to a pig. I refuse.