The first issue of Quantum Mortis: A Man Disrupted from Vox Day and Arkhaven Comics is a lot of things rolled into one. It’s a classic adventure style/sci-fi/murder mystery/procedural drama all existing cohesively in a single comic book. It spends a lot of time setting up the main characters’ motivations and personalities while also laying out the groundwork for the mystery that will carry the story ahead in proceeding issues. While the potential for the story is exciting, those looking for a bit of action with their story will find themselves left a little wanting.

In the opening pages we are introduced to our main protagonist, Chief Warrant Officer Graven Tower. It only took a few panels for me to decide that I’m going to like this guy. He is at the same time charming and egotistical. He’s obviously full of himself, but he’s also incredibly competent and in that way, he reminds me of a Tony Stark-type character. The story begins by him getting involved in a murder mystery, not because he really wants to solve the thing, but because he has a crush on the responding officer, Detector Hildreth. He even pops a breath mint and checks his hair in the window when she shows up. Classic. 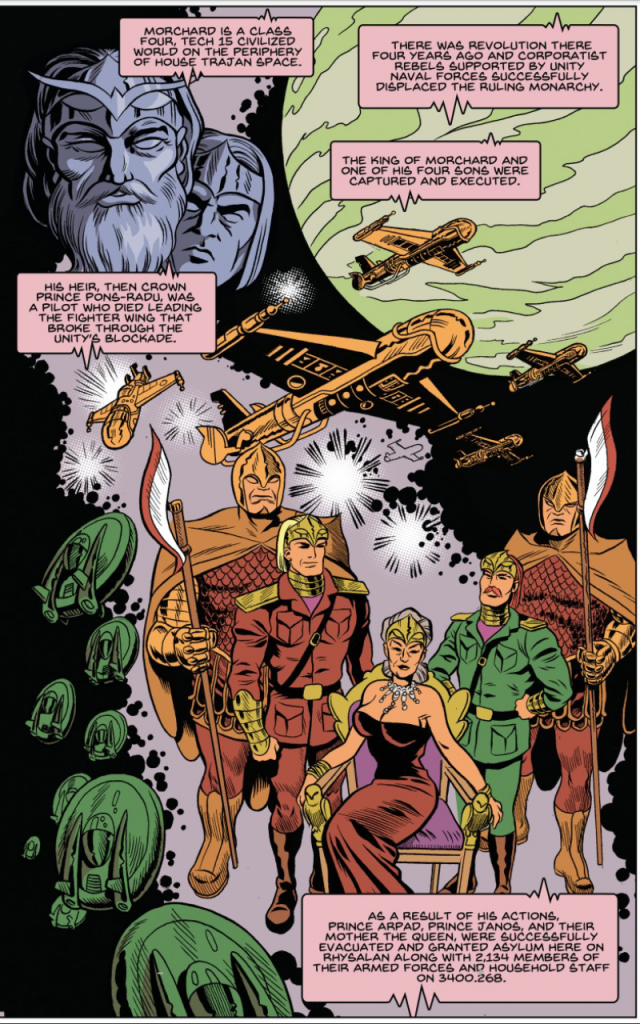 Detector Hildreth herself is also shaping up to be a great character. She, as is typically the case in these kinds of stories, not as enamored with Tower as he is with her. She is, in her own right, a fine officer and her more realistic outlook on the job seems to compliment Tower’s bravado in a way that we’ve seen play out countless times before on the page and screen, but it still works here, despite the familiarity of the tropes.

Besides some entertaining conversation with Tower and Hildreth’s built in AI programs, they are the only two characters we get to spend any real time with in Quantum Mortis. We’re given some flashes of other characters and some other alien races are mentioned in passing, but they do not actually show up and do anything in this first issue. We get to see some cute little robots running around and a weird Muppet looking alien, but no other real characters to speak of. That’s the biggest downfall of the issue. Almost the entirety of the book is Tower and Hildreth standing on the street corner talking to each other.

On the plus side, the conversation is consistently interesting and I am quite excited about the potential for the story that’s being set up here. The victim dies under mysterious circumstances and as it turns out, he was royalty from an alien race. A looming war could potentially break out because of this and that fact helps to add urgency to a story that could have otherwise been dry and flat. Seeing Tower and Hildreth put their heads together and connect the dots is great fun and I look forward to seeing how the pieces fall together. I also enjoyed how both characters were integral and necessary; neither one was written as more important to the case than the other and I found that refreshing. 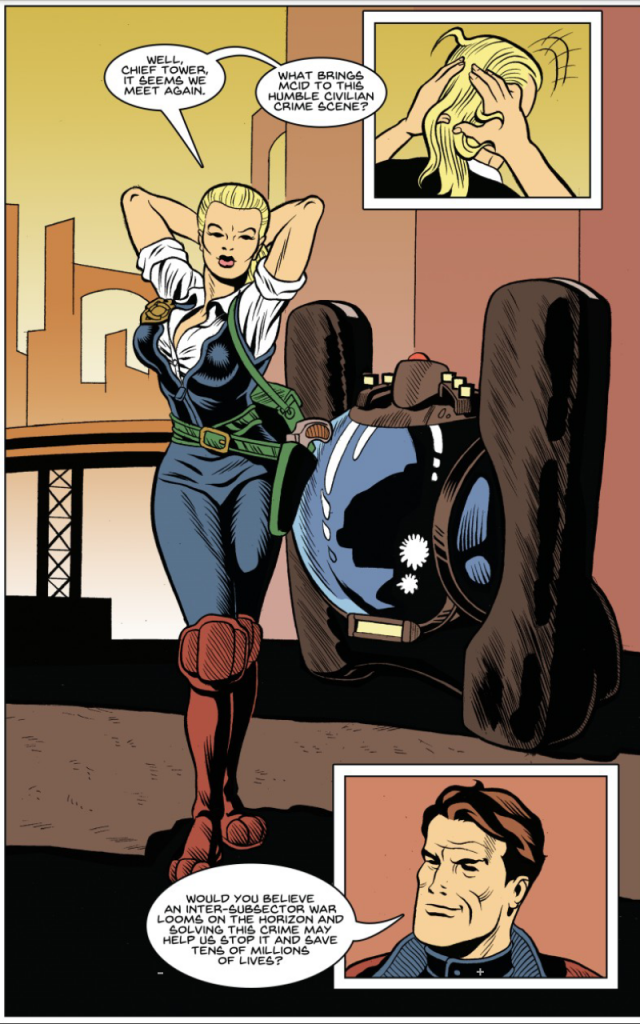 The artwork for this first issue is also a big plus in my eyes. It is immediately distinctive and evocative of those classic pulp adventure titles that used to flood the comic market decades ago. It looks like something ripped straight from the golden age of comics and I’m glad to see it making a return here. It won’t be for everybody, but I, for one, like it. Unfortunately, backgrounds are ignored in many of the panels and more often than not they are dominated by pink and red hues. I know it’s a stylistic choice, but it’s not one I particularly enjoy.

There’s an awful lot to like in the first issue of Quantum Mortis: A Man Disrupted, but there’s also some elements that give me pause. I appreciate the attention given to characters and motives, but if subsequent issues spend as much time on conversation without adding some action, it may be a tough road ahead. For what it’s worth though, I’m not worried about that. I’m sure this story is just now getting its feet under it and with such enjoyable characters and art that brings me back to the classic days of comics, I’m definitely on board for the ride.