Come what may, the Evil Dead movie series will always be remembered as a landmark of both horror and independent film making. As a result, even though the great Bruce Campbell says he’s done playing the films’ hero, Ash Williams will always be cool, relevant, and kicking deadite booty in one medium or another. Besides the films themselves, it’s probably in comic books that the series has found the most sustained success. Dynamite Comics has been responsible for most of that success and they have collected issues #0 – 5 of Ash vs The Army of Darkness in one collection for our reading pleasure. By the way, it’s really good!

Writers Chad Bowers and Chris Sims pick up precisely where the film Army of Darkness leaves off. After blowing away the screaming deadite terrorizing the housewares department of S-Mart, Ash is unceremoniously fired from his job. Meanwhile, evil (dead) things are taking place at Alan Shepard High School (ASHS. Get it?) and Ash is sought out to come to the rescue under the guise of a substitute teacher. If nothing else, seeing Ash act as a substitute and interact with a bunch of high school kids is worth the price of admission alone. 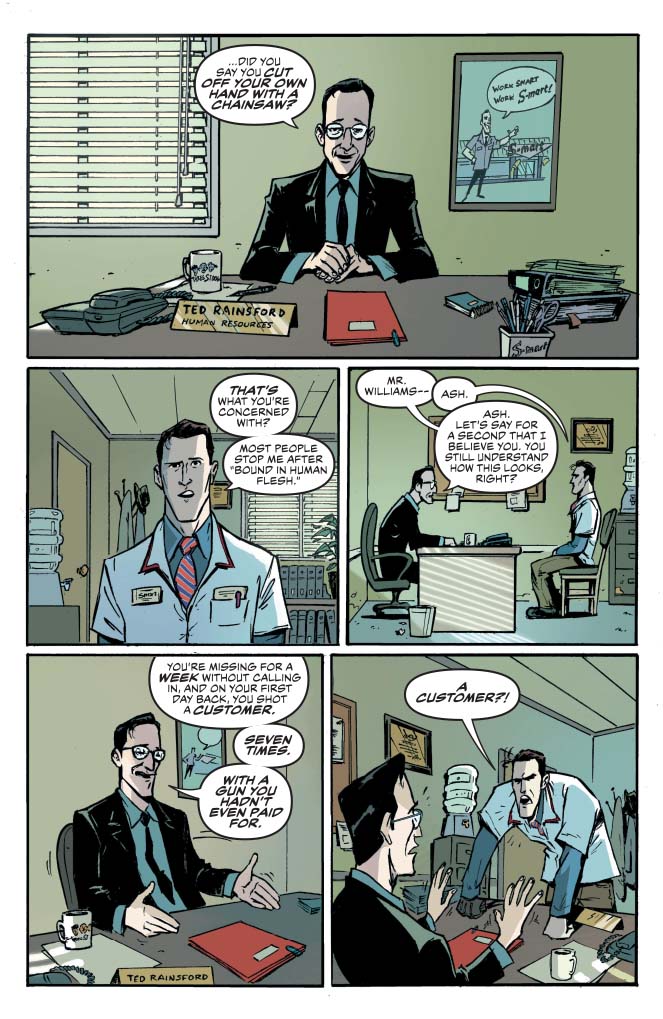 Of course, that’s not all there is to it. There’s some big government agency, the Supernatural Military-Adjacent Response Team, (S.M.A.R.T. Get it?)  involved  as well as the revelation that Ash is a prophesied Chosen One who humanity has been waiting on for centuries. It gets a little more convoluted and busy than is typical of Evil Dead lore, but that’s never the real focus of the story and that is the book’s biggest strength: Ash is the star.

In a six-issue series taking place almost exclusively in a high school, it would have been easy to include all sorts of subplots dealing with angsty teens and their drama, but none of that takes place here. Every element of the story is used in such a way to serve Ash with more things to do and more hilarious things to say. Ash, as a character, has undergone subtle changes in each of his incarnations, and that remains true here. In the original Evil Dead he was the classic, no-nonsense horror movie hero. In Evil Dead 2 he began to display more of his trademark wit and bravado. In Army of Darkness he is full-blown narcissistic Ash Williams that we all love and can’t get enough of. That hilarious and insufferable attitude is ratcheted up to “10” in Ash vs The Army of Darkness and it is awesome! Every interaction he has is hilarious and displays his total lack of concern with what people think of him. He’s also given a lot of great action scenes as his chainsaw arm and Boomstick are on full display here.

The middle of the story is the only point in which I feel things drag a little bit. I know we can’t have six issues of Ash quipping and killing deadites and that we need to have other elements in play, but anytime the focus is on S.M.A.R.T. and their involvement in the prophecy, it’s just not quite as fun. Luckily, these moments are quick and it’s never long before there’s another horrible creature terrorizing the school and eventually getting its face blown off. Good stuff. We’re even given a fantastic cliffhanger at the end which promises more Evil Dead goodness! 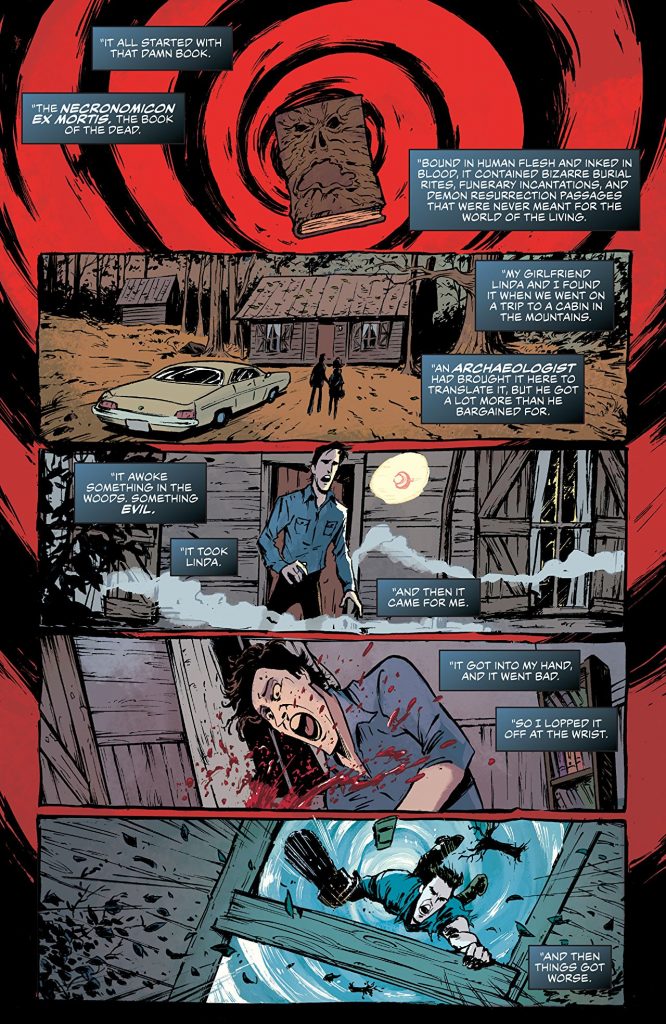 I’d also be remiss if I didn’t mention the art. It’s great. Mauro Vargas has created an incredibly stylized world that wouldn’t look out of place on a Saturday morning cartoon, but also looks completely appropriate when peppered with horrific imagery and bloody limbs being lopped and tossed about. Backgrounds are highly detailed and faces are extremely expressive. Ash’s chin is also appropriately pronounced, much as it should be.

This entire six issue run, and now in graphic novel form, has obviously been created by some people who have a deep knowledge and appreciation for the source material. This could easily have been the comic adaptation of Evil Dead 4 and now that I’ve read it, I wish it had been. Oh, also, Ted Raimi is Ash’s boss at S-Mart. Perfect.