After the non-stop, balls to the wall, roller coaster action of the first issue, readers may be forgiven for expecting the second installment of the new Aliens comic to slow down a bit and let us in on a little of the story. Well, those people are dead wrong as Aliens: Dust to Dust issue #2 doesn’t let up until the final pages as we’re given another round of terrifying Xenomorph carnage perpetrated onto a ship full of people whom we still don’t know well at all.

After the thrilling, but predictable, finale to the first issue, we’re left to deal with the aftermath of the chest burster running (slithering?) loose on the ship, terrorizing the passengers. The claustrophobic nature of this setup goes a long way in ramping up the horror factor that the Aliens series is renowned for. The paranoia that sweeps through the ship as the creature slips in and out of air vents, slaughtering as he goes is highly reminiscent of the first film and it’s so nice to see the Xenomorphs stepping back (albeit briefly) into their horror roots as opposed to the sci-fi action genre that they’ve been in for the past few decades. The issue may be fast paced and packed with thrills, but the horror and tension is still palpable, if not overt. 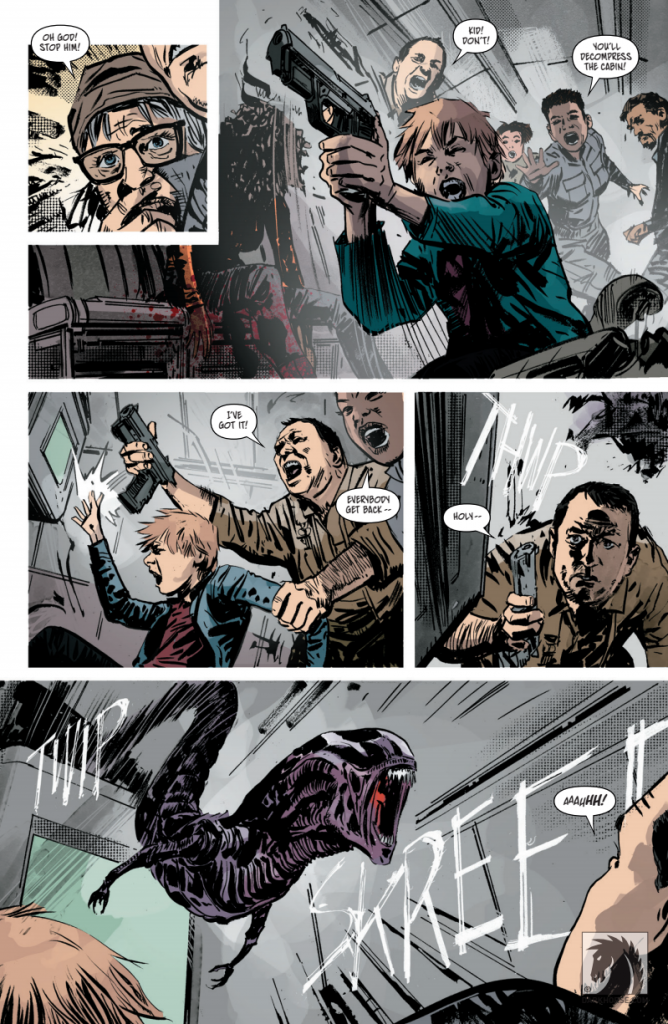 Now that his mother is dead (and who didn’t see that coming?) young boy Maxon has now taken center stage as the main protagonist. It’s still hard to get a real sense of what he’s all about though, as he’s spent nearly all his page time across two issues running and terrified. He does show some of his immaturity and impulsive nature, but he still has yet to display much personality. Granted, he hasn’t had much time, but this is a limited run story, so time is not a luxury that we have in getting to know these characters.

The other characters we’re introduced to fit the bill for traditional sci-fi horror side characters. Some exist purely to become victims for the Aliens, while others are given marginally more page time and serve to move the plot forward. They are, thus far, one-note personalities who aren’t well fleshed out at the moment, but we also haven’t been given any down time at all in which to see real character development, so hopefully that changes. There is, however, one character who seems to be far more stoic than the screaming throngs and I may be wrong, but it seems as if he’s being set up to be an android. I hope so; those guys are cool.

Gabriel Hardman is handling both the writing as well as the artwork on this series and he’s doing an exemplary job on both fronts. The art style sells the horror vibe that the story is going for very well. The use of shadows is executed flawlessly and the character models, along with the backgrounds, evoke a sense of tension that compliments the story. Art is sketchy and a bit muddy in places, but it fits perfectly. Coloring is also fantastic, whether it be a brightly lit spaceship interior, or a creepy, darkened hallway, all the aesthetics click together and sell the atmosphere. 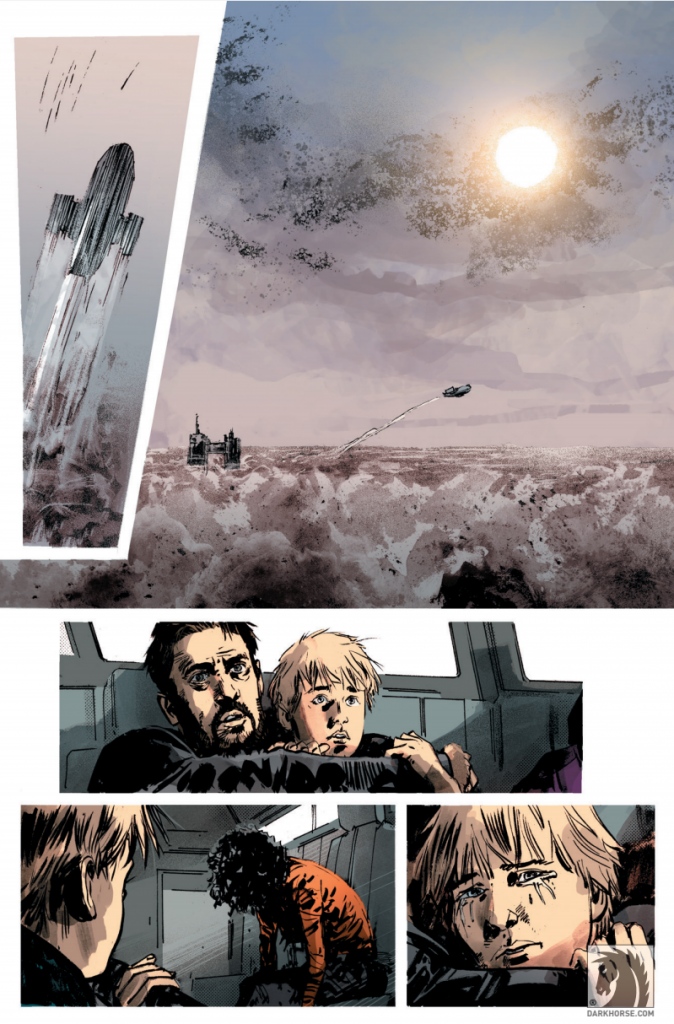 My biggest complaint would have to be that the story just doesn’t slow down enough to really invoke the fear and dread that I think the creators are going for. Aliens was a wonderful action movie, but Alien was a wonderful horror film. It seems that Hardman is shooting for the original Alien vibe, but most of the book, both the first issue and the second, are more in line with the sequel. That’s not necessarily a bad thing for fans, as Aliens is a highly regarded sequel; it’s just difficult to invoke horror and tension when there’s so much crazy action going on. The terror is definitely there, but it’s not as prevalent as I would have hoped.

Even if it is not completely successful in bringing back the creeping terror of the original film, Aliens: Dust to Dust is shaping up to be a fun ride and one of, if not THE best Alien inspired comic stories to come along in many years. We are now half-way done with the four-issue series, so time is running out for us to really become engaged with these characters, so I do hope Gabriel Hardman can pull it together in compelling and terrifying fashion. If issue #2 didn’t, on the whole, convince me that he can, the final page left me quite optimistic that he will.