When I first picked up Chicago Typewriter, I was expecting some kind of hard-boiled, noir crime drama set in the 1920’s. What I got, however, was a hard-boiled, noir crime drama set in the 1920’s that also happened to be crawling with monsters, spirits, the afterlife, and a healthy dose of otherworldly horror. While it may not have been what I was expecting, it turns out that prohibition era storytelling does in fact improve when you fill it with ghosts, ghouls, and evil machinations of all sorts. 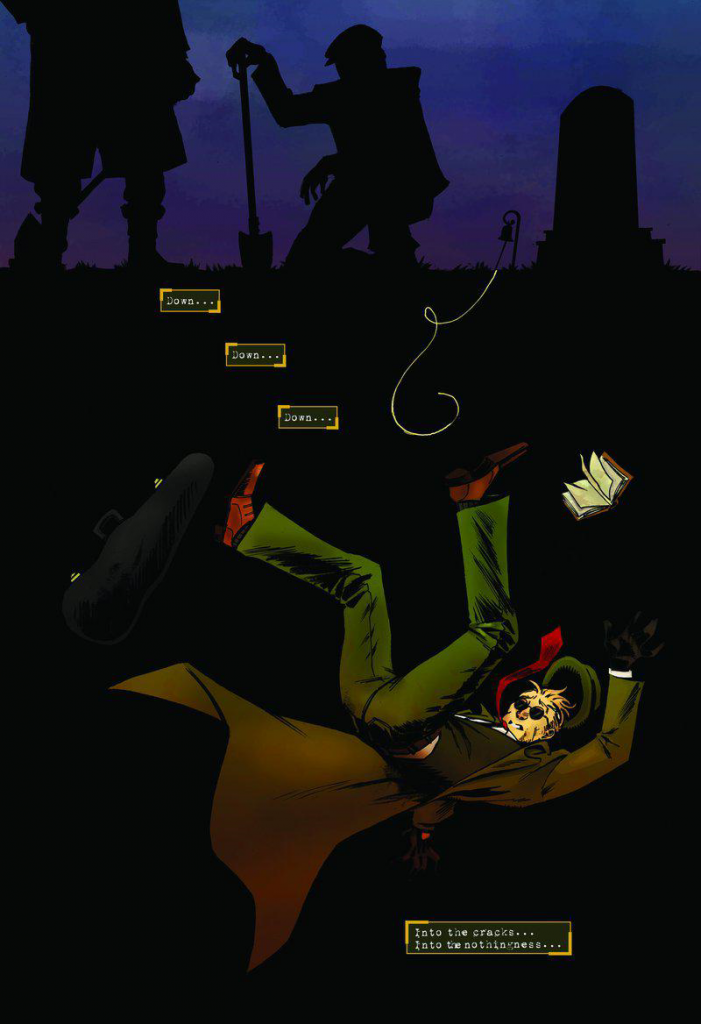 Things start out in an interesting, if a little bit of a confusing, fashion. A man by the name of Emilio Enzo, along with a few friends, are tromping about a cemetery in the middle of the night. Their purpose isn’t immediately clear, besides the fact Emilio wishes to be buried at the gravestone of one Remi Geroux. Things take a turn for the weird soon after that and it’s a roller coaster ride of crazy storytelling and outstanding artwork for the remainder of the trip.

There’s a lot of stuff going on in this world, even though we, the readers, aren’t privy to much of it. There’s a large amount of dialogue concerning events and characters that it seems like we should be familiar with, but we are not and it’s a little jarring at times. However, it does help the universe feel more fleshed out and lived in. The characters and their dialogue is written in a way that suggest they exist independently of our reading about them and in that manner, I can appreciate not witnessing a lot of what they’re talking about, but it still feels like we’re missing out on something. 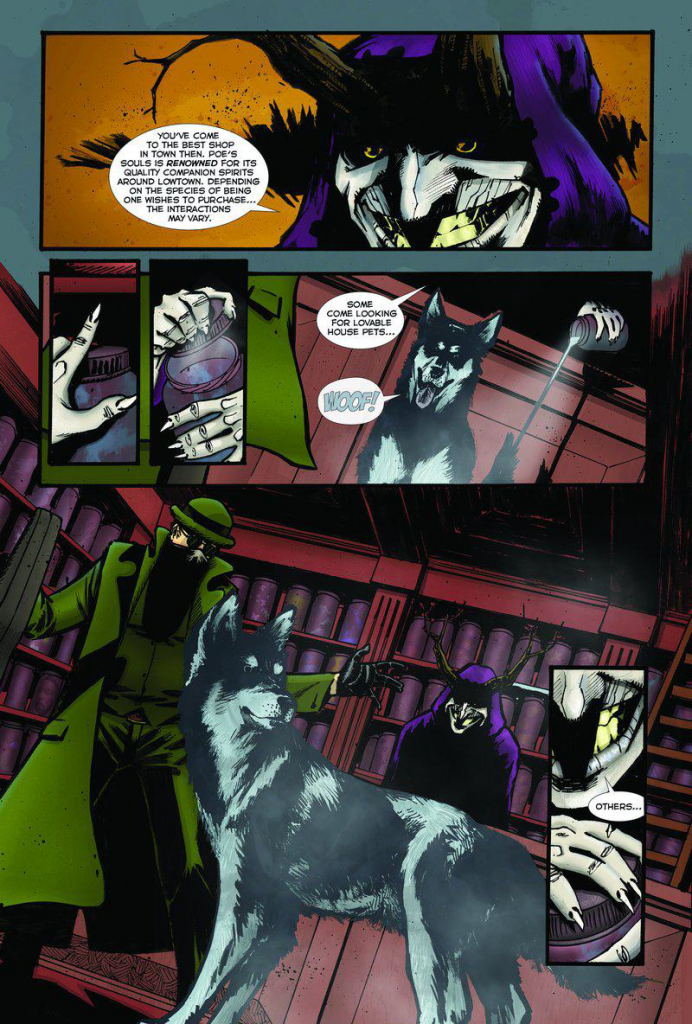 Much of the exposition is told through flashbacks and although it is all compelling stuff, the shifts in time can lead to a bit of confusion while reading it. Thankfully, the story becomes more cohesive as it goes on and by the time you reach the end, everything flows together nicely and a story that could have gone off the rails at any point along the way manages to stick the landing in an entertaining manner.

One of the strongest aspects of Chicago Typewriter is its rich characterization. Emilio Enzo is a very cool and capable protagonist and is someone who I can see heading up all sorts of supernatural stories moving forward. His quest to rescue his girlfriend’s soul from the underworld is compelling and gives us lots of reasons to root for him. Besides the fact that he dresses like The Riddler from Batman, he is an engaging character to spend some time with. The rest of the cast fares pretty well too, I just wish we could have gotten to know some of them a little better. There are a lot of people popping in and out of the pages of this story and it’s easy to get them mixed up. The ones that do get a little more fleshing out, however, are interesting and I really wanted to know more about them. Again, while it all seems as if we’re missing some back story on some of them, the fact that I’m interested in learning that backstory is a testament to the strong writing and world building done by writer/creator Brandon Fiadino. 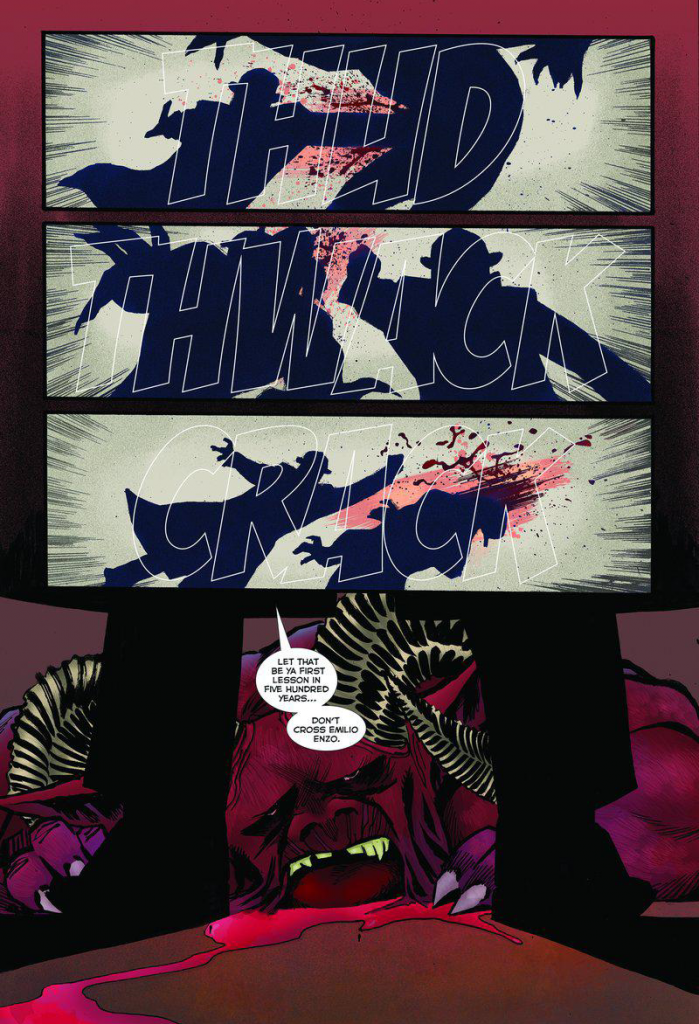 Now, a world populated by demons, monsters, and the like won’t be sold on the audience if the visuals can’t capture their horrifying essence, and Chicago Typewriter does not disappoint on that front. Artist Djibril Morissette-Phan does a marvelous job of bringing this insane world to life with eye-catching visuals that run the gamut from seedy, city streets, opulent gangster hideouts, hideous underworld landscapes, and everywhere in-between. Character models, both human and monstrous, are done extremely well and it is a pleasure to see the creative monster designs that dominate the latter half of the book.

Folks, this book is a wild ride. This review only scratches the surface of what Chicago Typewriter contains. The adventure of a man going to the underworld to rescue a loved one is a trope we’ve all seen before, but it’s presented here with such unexpected and horrific insanity that it comes off as exciting and fresh. There’s a horned, monstrous shop-keeper, a flying car, ink ribbons stained with cursed blood, monsters climbing through mirrors and more. Every page brings something new to the table and I was consistently entertained by it. The story has some pacing issues to be sure, and the world is so over-stuffed with people and information that the pages of the book can’t quite give it all the attention it deserves, but what the book gets right, it gets REALLY right and I enjoyed every moment of it. I can’t wait to see where Emilio goes next!