“Still this made the entire trip worth it.”

The Superman of today hardly resembles his former self. He’s got a large family, dead relatives, and is no longer the leader of the Justice League. The recent Man of Steel series had some fun with his origin. Rogol Zaar was revealed  to be the author of Krypton’s destruction. Writer Brian Michael Bendis has ensured that his debut on the character will be remembered. Not with massive and cataclysmic changes to Clark Kent’s life, but with simple reminders that he never really changed. Superman #1 builds on the success of Man of Steel, an exciting and fun debut for the talented team of Brian Michael Bendis and artist Ivan Reis.

With the Fortress of Solitude destroyed and Lois and Jon in space, Superman has time to reflect. The times they are-a-changing, with new responsibilities and motivations. For most of the comic, Superman spends his time being Superman. Worrying about those who don’t need it, saving those that do need it. It’s reminiscent of the work of Dan Jurgens, with such an effortless command of the character. Every page and bit of dialogue reminds you that this is the Superman you’ve read your entire life. Just because he’s under new management, doesn’t mean he’s changed.

While the plot takes some odd leaps and bounds, the story is downright entertaining. Superman #1 continues Brian Michael Bendis’s successful introduction to the first superhero ever created.

“I have to find my family.”

A simple and absolute truth. Because when last he left them, Lois and Jon left with his father Jor-El to travel the Universe. Haven’t we all dealt with the awkward situation, when your previously-dead father comes to abduct your recently-created son? That’s quite a lot for Superman to deal with, and yet he does with ease. The tone of the comic can be hit-or-miss, but the characterization is absolutely spot-on. Not since Miles Morales has Brian Michael Bendis had such a commanding and picture-perfect presence over a character. 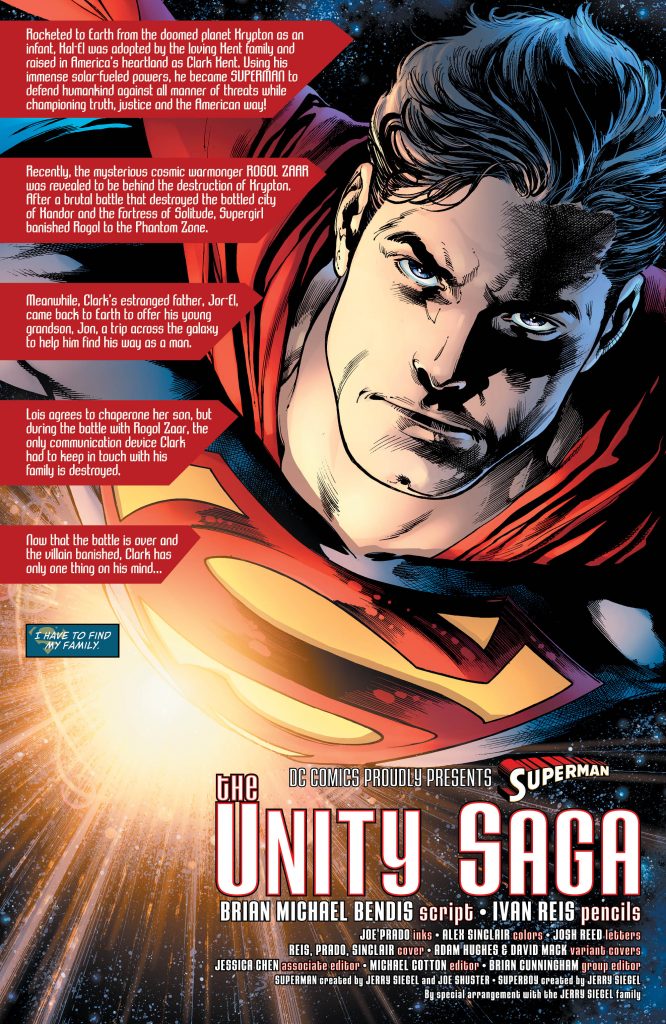 DC’s prodigal son is pretty busy in Superman #1. He fights off massive armies of aliens, saves helpless innocents, and talks with superhero friends. All the while delighting everyone with a big and proud smile. The beauty of Bendis’s work is that you won’t feel as if anything has changed. This isn’t about the most successful modern Marvel writer moving to DC. This is about a talented author bringing his uniquely awesome voice to one of the most important characters ever created.

The ending leaves a little to be desired. Considering the ramifications, it opens up the DC Universe to even more havoc. While a smaller and more character-driven story would have been appreciated, this is still Superman at his best.

As Superman’s life is turned upside down, it couldn’t be more entertaining to watch! While the fun and entertaining dialogue is sure to captivate, the artwork will mesmerize even more. To help create his brand new Superman story, Bendis is joined by DC greats Ivan Reis, Joe Prado, and Alex Sinclair. Some of the most successful comic artists of the modern era. Teams that have tackled some of DC’s greatest characters and teams, while working with some of their most talented writers. A brand new Fortress of Solitude, massive space battles, Justice Leaguecameos… All are rendered in beautiful illustrations thanks to the talented hands of Ivan Reis. 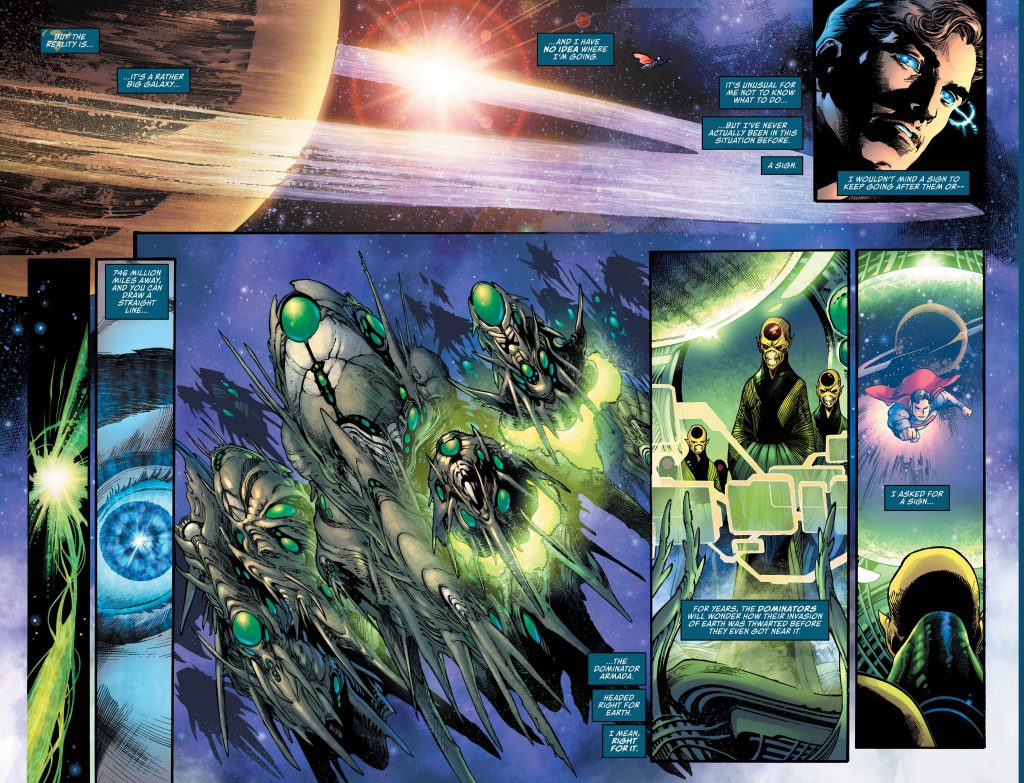 In the last couple years, Reis has had formative runs on Cyborg, Aquaman, Justice League and the recently-created Terrifics. Some of the most important titles at DC. Somehow, he makes his previous work look like amateur hour when glancing at some of these pages. The settings and backgrounds alone seem like an impossible level of care and mastery. Hopefully, Reis can stick around for a few issues on this series. He has a tendency to move quickly between titles. A good amount of time on Superman would be greatly appreciated.

Brian Michael Bendis has finally arrived. His work on Superman has already had a profound effect on the character. He’s altered his origin story with Rogol Zaar and has altered his present by destroying the Fortress of Solitude. But everyone’s favorite superhero isn’t so easily flustered. Though his new writer is making a few changes to his life, there’s been no alterations to his character. One of the many reasons that Superman #1 is an exciting debut for the world’s first superhero.

The quality of both the writing and the art is outstanding. Brian Michael Bendis and his partner-in-crime Ivan Reis have very much outdone themselves. While the story may wander down some odd and strange directions, it maintains an endearing tone with a beautiful look. Thanks to Reis, inker Joe Prado, and colorist Alex Sinclair, Superman and his slightly-new world looks as wonderful as ever. Featuring the kind of detail and thoughtful design that could only come from one of the most trusted voices in the DC art department.

When Brian Michael Bendis first announced his move to DC, many expected he’d be shaking things up. Creating brand new characters, altering old ones, and shaping this new Universe to resemble some vision he has. If Superman #1 is any indication, the only vision Bendis has for Superman is wonderful and creative storytelling. The two seem to go together like two peas in a pod. The exciting and bewitching pages of Superman #1 mark the successful beginning of a beautiful friendship between a comic writing legend and comic’s greatest hero.