The first issue of Tap Dance Killer introduced us to Nikki St Clair and her gang of anti-heroes. The issue was a fun romp with vintage aesthetics throughout that kept the reader entertained as well as a little bit nostalgic, especially for those of us who remember reading comics that came with a healthy dose of 4th wall-breaking narration. Issue #2 retains what made #1 so fun and continues what the first issue started by giving us a little more insight into Nikki herself, but focuses mainly on the colorful cast of characters around her.

The fact that this issue spends more time on Nikki St Clair’s supporting cast doesn’t mean that the Tap Dance Killer herself is forgotten and pushed off to the side; far from it. In fact, even with the smaller amount of page time she’s given here, we actually get an even deeper dive into who Nikki is as a person. Interestingly, these revelations show off a little more of her unappealing side as it showcases her more villainous and mean-spirited aspects. This shouldn’t be seen as a detriment though. These multifaceted personality traits serve to create a more fleshed out and interesting character in Nikki as well as lay the groundwork for some potential inner conflict to come in the future. 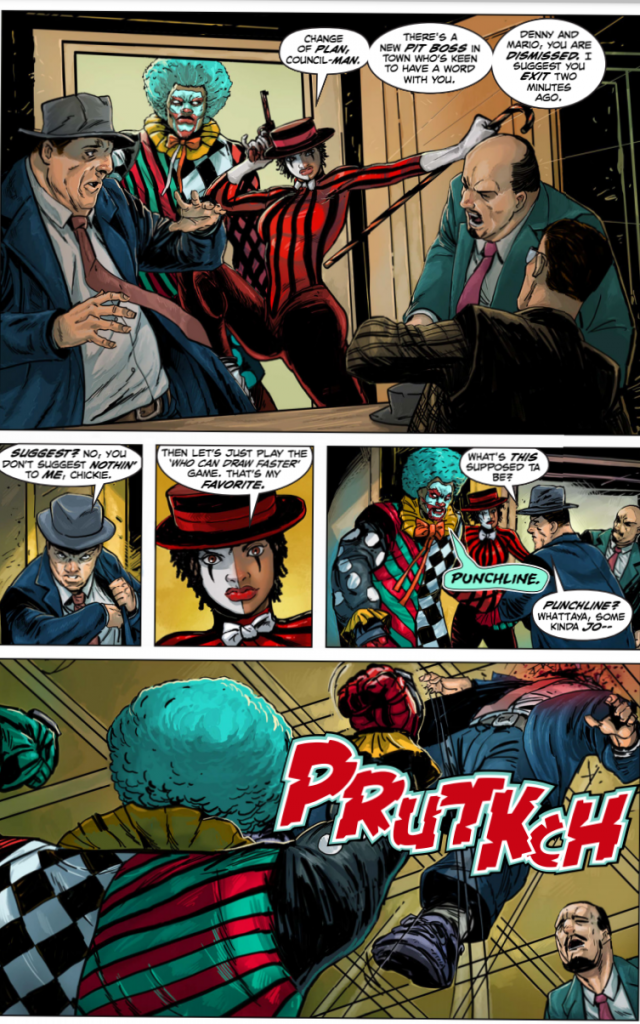 I thought the first issue lacked a bit in characterization, specifically when it comes to the supporting cast. Issue #2 addresses some of these issues and sheds a little more light on Nikki’s crew. Sir Terror and Klaus are fun characters and it was nice to spend a little more time with them. Although the mystery of their exact power set is still an issue for me, this book allowed their personalities to shine through a bit more and it made me all the more interested in finding out more about them; specifically Vincent Reed, aka Sir Terror. I still have no idea what his transformation entailed, other than he now has a silver face. We also get a little more insight into Carlotta Vitalli who is obviously being set up as the main villain and a proper foil for Nikki in the near future. She’s well-written and, like the rest, possesses sympathetic qualities along with her villainous ones to keep her from becoming a one-note villain.

The real star of this issue, however is ex-boxer Drayton Hayes. He was kidnapped by the gang at the end of the first issue and here we are given a deep dive into his back story; deeper than any of the other characters so far, in fact. Drayton is a big guy who’s had some tough breaks and he’s persuaded to join Nikki and the others with a promise that he’ll have vengeance on those who’ve wronged him. Drayton gets his own Weapon-X style transformation and becomes Punchline the killer clown! Comic books, people. Comic books. 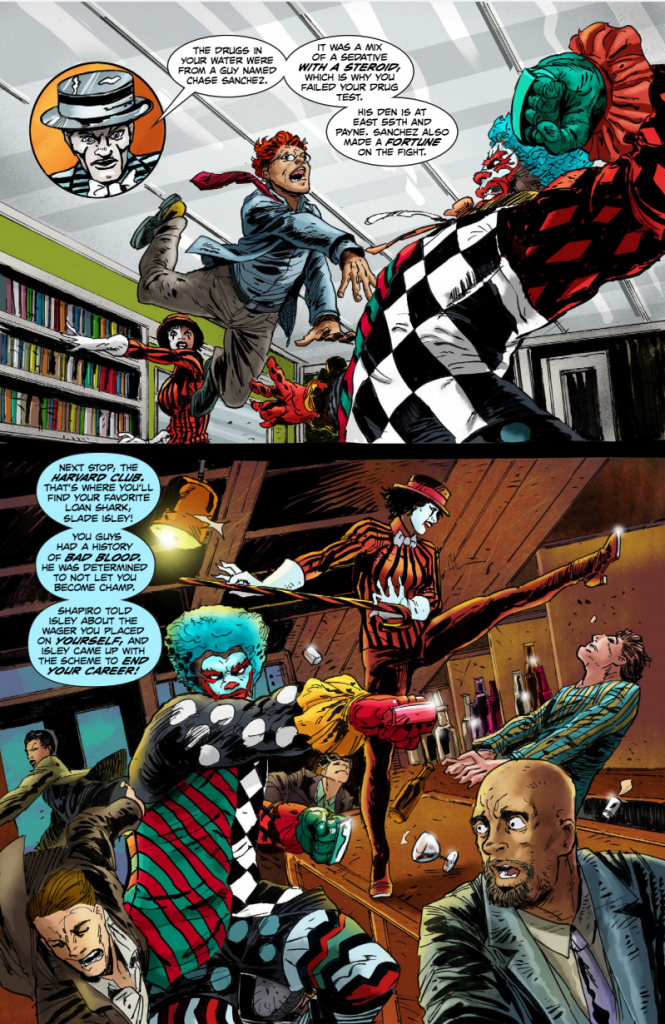 It’s Drayton’s back story, transformation, and vengeance that fuel most of this issue and it’s a pleasure to view. He’s a perfect partner for Nikki and his presence elevates Tap Dance Killer to even more potential than it already had. He’s easily the most fleshed out character of the series thus far and even though he is essentially, a bad guy, Punchline is a sympathetic one that we can’t help but root for. That’s a testament to the strong writing skills and impressive world building that writer Ted Sikora is bringing to the book. It’s a story that could be oppressively dark due to its subject matter, but is kept bouncy and lively thanks to strong writing, self-aware humor, and an extremely likable cast.

Artwork, like last time, is still top-notch. Everything is realistically rendered, but in a stylistic way that compliment the super-human aspects of the story. Coloring is done beautifully as well and matches the high marks set by the illustrations. Aesthetically, everything is top shelf in Tap Dance Killer!

The first issue was stronger on a whole, but that’s probably simply because it had the advantage of introducing us to so many colorful characters. Issue #2 looses no steam, however, and presents us with a story that is just as much fun. By focusing more on fleshing out a single character, issue #2 feels a bit more satisfactory from a characterization standpoint and I can only hope that the rest of the cast gets the same love and attention going forward. I’d still like to know more about people like Klaus and Vincent Reed, as I feel they’re still, thus far, along for the ride, but I trust that will come in time. Tap Dance Killer is a great reminder that comics can and should be pure fun for the reader and after two issues, it has accomplished that and then some. No one should hesitate to seek this title out!