There have been plenty of set photos and videos from fans of Zachary Levi as Shazam. We even got an awesome poster courtesy of the star. But now we got our first official photo of Shazam in action! 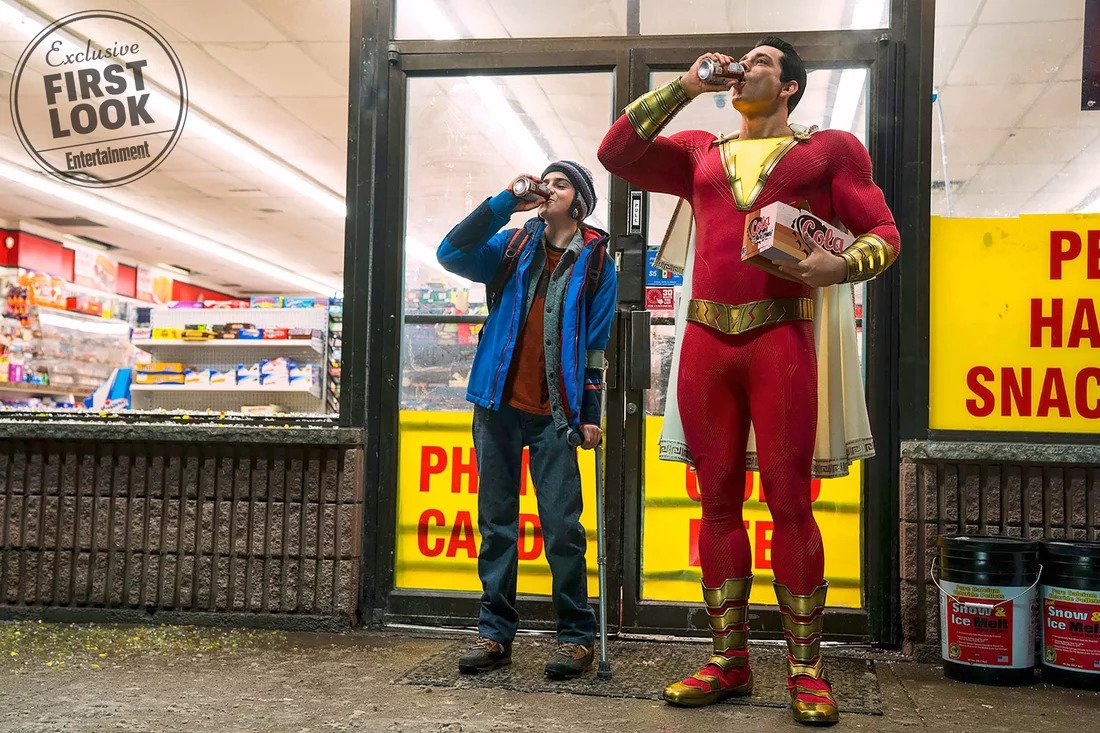 This is just an absolutely perfect first official photo as it captures the essence of Shazam and the true boy at heart that he is. He’s just enjoying a soda with his friend, Freddy Freeman, outside of a convenient store. Who hasn’t done that before?

Plus the suit looks really, really good. Even the boots which I was suspect of previously. I still think the lightning bolt could be a little longer, but overall the suit looks fantastic. Director David Sandberg discussed how the suit came together:

“I wanted to keep the shorter cape as a throwback to the original because that’s something that sets him apart from Superman or Batman. It makes him feel a bit more Golden Age superhero, which is the vibe I’m going for.”

Levi, who was heavily criticized when he was cast for being a little too scrawny to play Shazam, has been hitting the gym hard, but he also gets some help from the suit.

It’s like the old saying goes, “Hard work, over time, plus chicken & broccoli, minus carbs, divided by whey protein, in which “X” represents the amount of supplements and “Y” represents the sentiment of “WHY the hell am I doing this to myself?!”, multiplied by shameless selfies whilst staring into nowhere…carryyy theee ooone…equals results.” 📸 by @ericblackmon / “Tan” by Hefe Filter / Body by Jake. 👏💃

But it’s not as big as Ben Affleck’s Batman suit. Levi told EW, “I don’t know if [the suit is] crazy big if you look at some of the others — look at Batman.”

With the release of the photo we also got some more details about the upcoming film. Billy Batson who is the alter-ego of Shazam finds himself assigned to a new foster home and quickly becomes friends with comic book lover Freddy Freeman. Billy finds himself becoming a superhero when the Wizard, recently cast as Djimon Hounsou, interrupts Billy’s subway ride. He determines that Billy is to be the successor to his powers and reveals what they entail and that you activate them by saying, “SHAZAM!”

This origin story looks to be ripped straight from the comic book pages. Given this official first look and a brief origin story, DC Films looks to be getting back on track with Shazam!

The film is expected to be released on April 5, 2019. There will more than likely be plenty of more Shazam! news dropping the closer we get to San Diego Comic-Con!

What do you think of the new suit and the brief origin story?