Kristen Wiig was a surprising choice to play Cheetah in Wonder Woman: 1984. She’s one of the best comedic actresses of her time, that goes without saying. But Wiig has some amazing acting chops, and will likely exercise them all when bringing Barbara Minerva to life. Exercise is right. A half-Cheetah supervillain is going to get physical throughout the movie. In the latest set video from the film, fans get their first look at Barbara Minerva in action!

In this leaked video, Kristen Wiig leaps up into the air with the superhuman force of a soon-to-be Cheetah Person!

That certainly looks like Wiig, alright. But thanks to the amazing quality of modern movie make-up, it could be her stunt-double. Though since the extent of the stunt doesn’t look to be that complicated, that’s most likely the actress playing the part, and it shows just how agile and quick she will be.

More to the Story

There’s a few interesting tidbits to dissect from this image. First, that she’s obviously sneaking or breaking into some building in the middle of the night. Second, Barbara seems to be capable of using her powers before she actually becomes a Cheetah look-a-like. Meaning that Barbara Minerva’s powers will likely develop over the course of the film. However, it’s possible that her Cheetah-like appearance might be added later in post.

In her most recent appearance in the Wonder Woman comic by way of writer Greg Rucka, Minerva was a sympathetic character. One who obviously suffers from a curse, not someone blessed by powers. 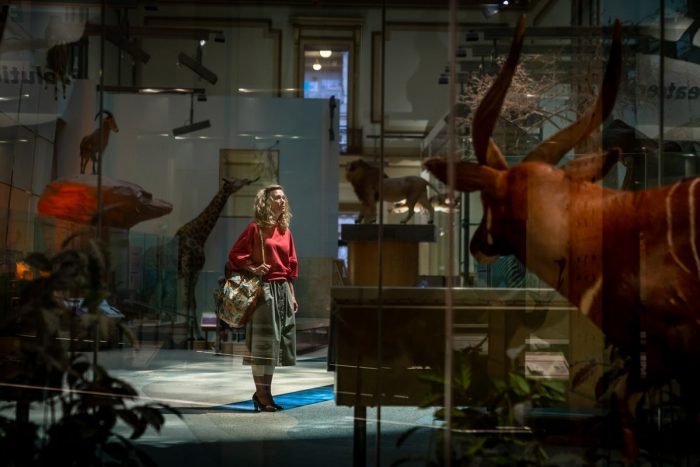 It’s a sympathetic perspective that serves to make the character more interesting and relatable to the audience. Sounds like the beginnings of a great villain.

Now that even more is being revealed about the film, fans should absolutely expect a small sizzle reel/trailer drop sometime next week. Considering the more recent reveals on films like Aquaman and Shazam!, DC is clearly getting ready to show off their wares. While those two other DC releases come out before Wonder Woman: 1984, it’s safe to say that the sequel is the most highly anticipated of all. Patty Jenkins and Gal Gadot set a high bar with the first film.

Fans and audiences around the world have high expectations for Diana and Steve’s outing into the world of 1984.