Beware of Spoilers to Superman #1, Ye Who Enter Here

Last week, Brian Michael Bendis decided to make Superman’s life a little harder. He sent Jon and Lois Kent on a mission across the galaxy, and he destroyed the Fortress of Solitude. Like any aspect of Comic History, the Fortress just can’t remain dead, can it? In Superman #1, with the aid of his friends, the titular hero finds a new home for his famous crystal getaway. With one minor crystal, Clark is able to recreate the Fortress anywhere in the world. Hmmm, there’s certainly some potential there. An international location, perhaps? Maybe somewhere more local than the North Pole? Bendis probably considered quite a few locales before settling on the new home of the Fortress of Solitude. One of the most recognizably weird places in the world. 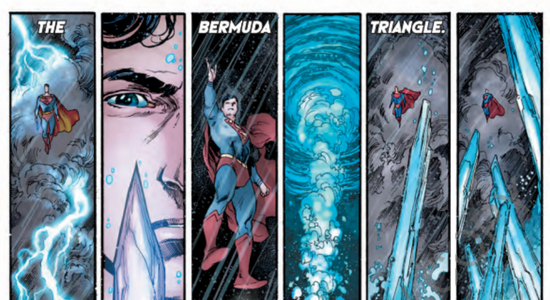 The Bermuda Triangle. One of the most infamous locations in the world. Known for the mysterious disappearances of countless ships and airplanes. Though its reputation is certainly embellished, it is known throughout the world. If Superman is trying to keep people from finding the new Fortress of Solitude, he picked the right spot.

The Triangle is a large, obviously triangle-shaped expanse of ocean that is somewhat near the coasts of Florida and Puerto Rico. While it’s a popular shipping and travel route, it’s the exact kind of location to put a superhero’s hidden base.

Home Away From Home

Last week DC gave the first glimpse at Superman’s not-so-bachelor pad with a black and white image of some gorgeous Ivan Reis artwork. 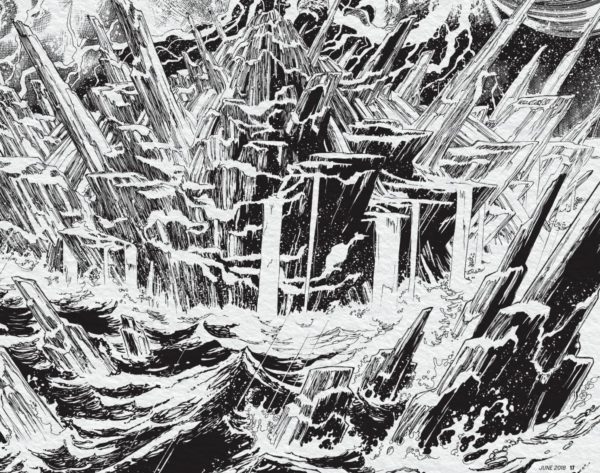 One of DC’s most famous artists illustrated one of the recent Man of Steel issues as well as Superman #1. It should come as no surprise that every panel is absolutely breathtaking, with the image above just hinting at the level of detail contained within.

The gorgeous display of crystalline structures erupting from the ocean is the exact kind of artwork fans want and expect from a Superman comic. In typical Clark Kent fashion, he’s never really upset about having to find a new location for his “getaway.” As the rest of the Justice League dwell on the loss, he just picks up and moves on, wearing that oh-so-familiar smile that could disarm most enemies. The Fortress of Solitude has been in the North Pole for as long as it’s existed. Now this continental shift becomes one of many, many changes made to Superman’s life in recent years. But like the wonderful, hopeful hero that he is, Superman faces all of this change with his same positive demeanor. Amazing those around him and inspiring them to attempt the same.

While the major changes in Clark’s life might cause some issues with hardcore Superman fans, Brian Michael Bendis clearly knows the character. Superman’s life is always going to change. Such is the way of comic book storytelling. But to face those moments with that same resilient expression is what the fans want, and it’s what Brian Michael Bendis and Ivan Reis deliver in Superman #1.