Chuck Dixon is responsible for some of the most memorable comic book stories and characters of the past few decades. Most notably, he’s revered as the creator of one of Batman’s most formidable villains, Bane. Dixon’s newest comic series, Avalon, comes courtesy of Arkhaven Comics and is set in Vox Day’s Alt-Hero universe. I’ve been a fan of the books that have populated that world thus far and Dixon’s inclusion in this particular story had me hopeful and VERY excited. I’m happy to say that I was not, in the least, disappointed.

The story itself is told within the framework of an interview given by a super-powered vigilante named Fazer to a reporter in a local diner. Right off the bat, it’s evident that heroes/vigilantes are well known and even expected in this universe as nobody seems to think it’s strange to see a costumed hero sitting and chatting with a reporter. The interview itself seems to be focusing on not so much the actions of fighting villains and saving people, but rather on the fundamental reasons why it’s done and the ideas of responsibility in managing your gifts. It’s a refreshing introduction to the characters and it’s the characters themselves that make what could have otherwise been a generic crime fighting story really worth reading. 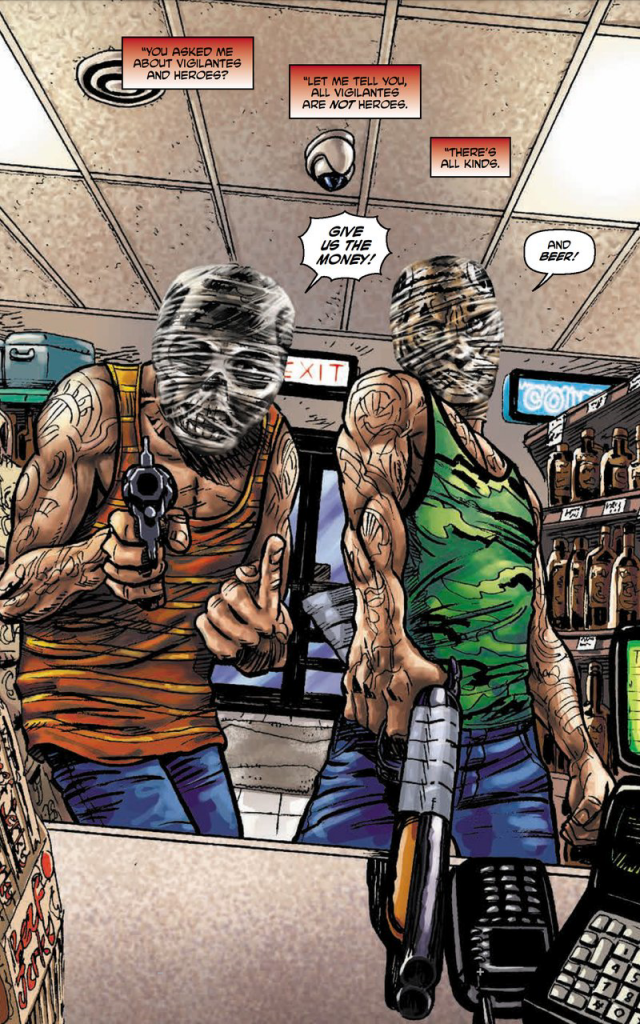 Fazer is joined routinely in combat by a bulked-up hero named King Ace. His gimmick seems to have something to do with playing cards, but that is never touched on or even referenced, really. That is one of the knocks against this story; we are really given no insight into what these hero’s power sets are, how they got them, or how they use them. Its almost as if we’re supposed to either already know it, or just accept it without thinking about it. It’s a tad irksome, but I must digress because it in NO way diminished my enjoyment of the book.

The characters that populate Avalon are multi-layered and even the heroes are not without their faults and flaws. This attention to deeper characterization is a boon for both the book and the reader as it allows us to identify better with them. There are some thrilling action scenes, but the moral and ethical conundrums that the characters deal (or choose not to deal) with are what makes the story compelling. According to Fazer’s interview responses, there are many vigilantes running around and dispensing punishment to criminals, but not all of them should be considered heroes. Many of them are self-serving and are only marginally more magnanimous than the villains they’re fighting. “True heroes” as described by Fazer, live by an unwritten code; most notably, the “no kill” rule. The fact that there are new vigilantes on the scene that do not abide by these rules lay the groundwork for potential excitement moving forward. 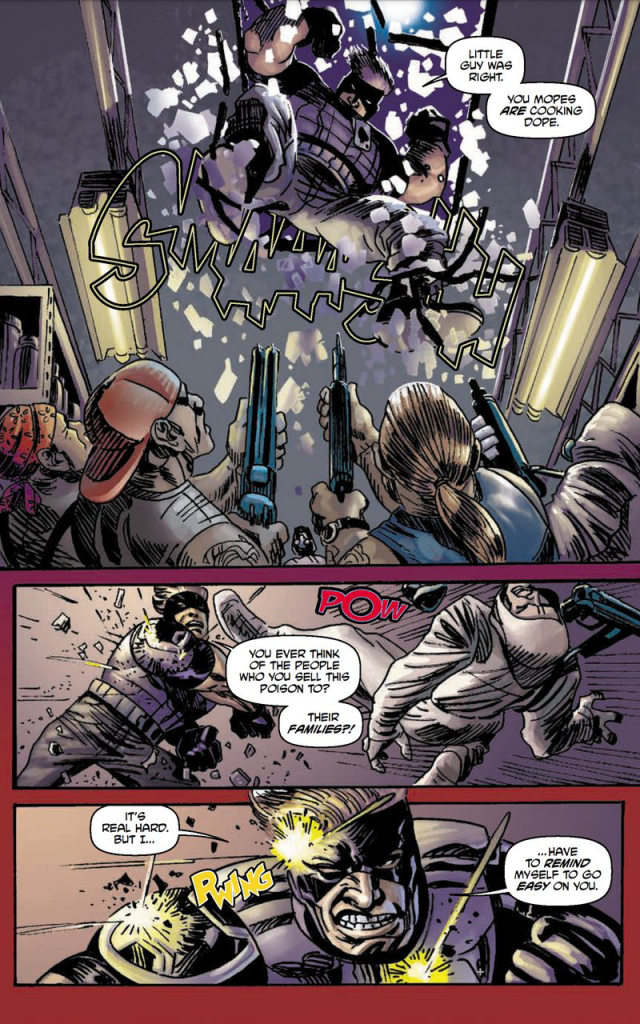 It’s the promise of these two clashing ideologies coming to a head that make the future of this series compelling. Heroes like King Ace will never put up with the killing of villains, which is exactly what newcomer, Vendetta is doing. It’s a moral conundrum that I find myself on both sides of. I think the people that Vendetta kills certainly deserve it, but I also have a problem with any one person appointing themselves judge, jury, and executioner. The clash between these two that is eventually coming is exciting and is something akin to a meeting between Batman and the Punisher. Two people with the same motives, but wildly differing tactics.

From an aesthetics standpoint, the artwork won’t be for everyone, but from a personal viewpoint, I love it. This is in no small part to nostalgia as artist Frank Fosco is the one responsible for the artwork for the criminally underrated volume 3 of the original Teenage Mutant Ninja Turtles run from Image Comics. It was like another trip to my childhood to see the dark, smudgy, even imprecise character models populate the world. There’s a distinct, grimy, essence to the whole thing and I think that it perfectly compliments the gritty, hyper-realistic setting.

Avalon is set in the wider Alt-Hero universe and I can’t wait to see how all these different characters and situations begin to intertwine with one another. On its own though, Avalon is a great first issue that introduces us to a fascinating group of super-powered individuals who are struggling with their own strengths and weaknesses. The conflicts that will eventually play out are worth being excited for and it’s a great bit of writing and world building overall that allow us to feel as if we’re already familiar with this universe, even as we’re only just introduced to it. You can feel safe in being excited for this one, folks.