Injustice versus Masters of the Universe. When one thinks of cross-overs, this isn’t the first that comes to mind. One of the more vicious iterations of the DC Universe facing off against the world of He-Man. Originally a toy, the Masters of the Universe has grown into a huge franchise with countless fans. So why not pit them up against a murdering Superman? With writer Tim Seeley at the helm, the maniacal mayhem goes from ridiculous to ridiculously fun. The comic is definitely geared more for a younger audience, but that doesn’t make the story any less awesome.

Famed cross-over artist Freddie Williams II packs as much detail into every page as possible. Creating a couple of vibrant and beautiful worlds for these hilariously-grouped allies to explore. With Jeremy Colwell providing beautiful, water-colored inspired colors, the pages fly by even faster. At first, the bridging of these two worlds seems a bit much. Luckily, Tim Seeley knows his audience. Though the premise is remarkably simple, it helps to make the cross-over a little more convincing. As he ups the ante with an amazing final page,  Injustice vs. Masters of the Universe #1 is a promising and epic beginning.

“What good is being the most powerful man in the Universe…”

Apparently when you’re “the most powerful man in the Universe,” other-worldy forces will come looking for your help. Such is the case with Injustice vs. Masters of the Universe #1, where the Justice League asks He-Man for a helping hand against Superman. Just the first of writer Tim Seeley’s twists and turns on this roller coaster of fun. Pitting the vicious Injustice team against He-Man and his allies seems like a weird idea, one of many to come out of DC’s recent bevy of cross-overs. But not every one of those cross-overs has Tim Seeley at the helm. One of the funniest and best comic writers working today. He jumps headfirst into this hilarious story, and fans are all the better for it. 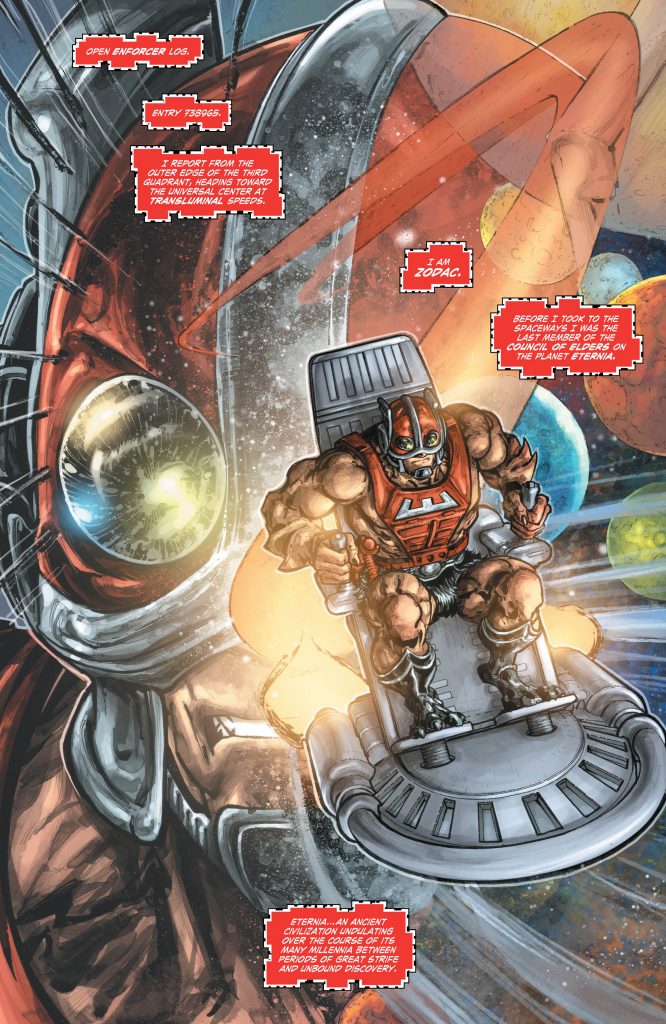 He-Man gets a few minutes to deal with famous rival Faker before being thrown into the story. The infamous blue He-Man replicant is doing a decent job of leading Eternia, for once. Leading He-Man’s subjects to actually rebuke him for stopping Faker and re-taking his throne! Just as He-Man/Prince Adam gets fed up with his own world, the League appear to ask him to save their’s from Superman. With these minor touches, Tim Seeley paints the He-Man world in a new light before throwing him into DC’s. Thankfully, the plot is quite simple. Though that could be due to the book’s younger target audience. Still, that doesn’t really hamper the fun. Though one can only imagine that the Injustice side of this story will end up being quite tame.

The final page is just the cherry on top of an already-entertaining Sundae. An exciting promise that this story is going to get epic and devastating for our characters.

“He-Man uses his strength to fight for your Freedom. Or he doesn’t use it at all.”

Freddie Williams II is most recently famous for illustrating the Batman/Teenage Mutant Ninja Turtles crossover series. He’s also no stranger to He-Man as he worked on the He-Man/ThunderCats crossover. He uses a a similar style and execution here in Injustice vs. Masters of the Universe #1. The style is lighthearted and bright, especially thanks to the work of colorist Jeremy Colwell. The character designs are especially detailed and perfectly capture the spirit of every character. From the DC heroes to He-Man himself, Williams has every character down to a tee. 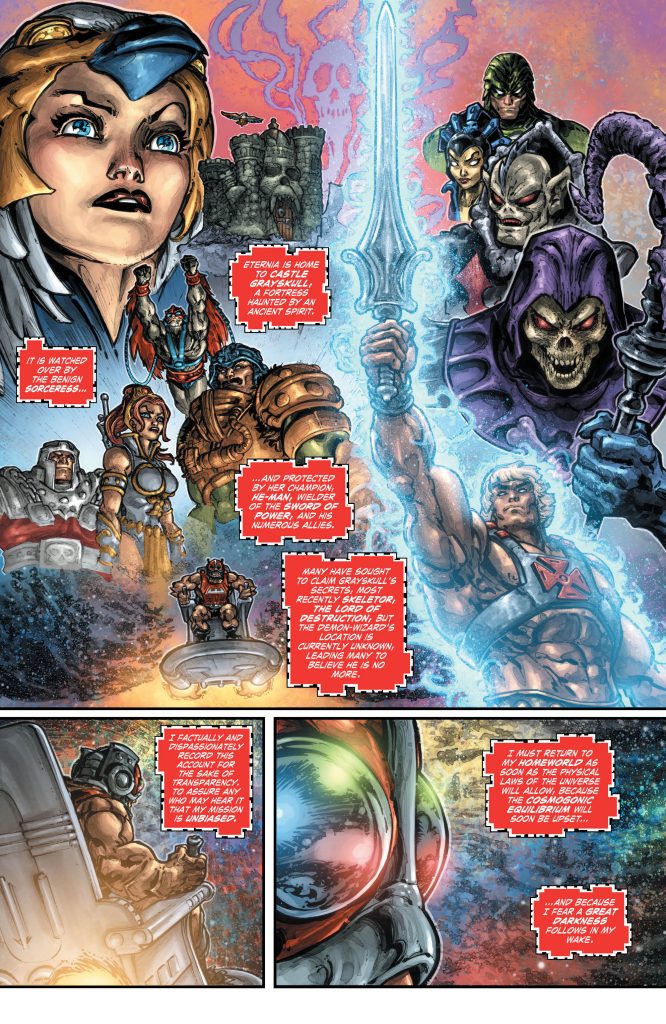 Spotting some of your favorite characters from the various stories of He-Man is just one of the many alluring aspects of this cross-over. Tim Seeley has Williams working overtime. Thanks to Seeley, Williams is drawing everything from the cosmos to a tomato landing in the face of He-Man. Perhaps an example of the more lighthearted tone that appeals to kids and teens. Nevertheless, every page will keep a reader of any age entranced and attentive. Once again, Freddie Williams II creates intricate pages with a beautiful blur of color and detail.

DC’s crossovers have been verging on ridiculous, but that’s the point. They’re odd collaborations that are meant to entertain in the weirdest why. Some of the best writers out there have helmed these titles. They’ve used they’re amazing talents to explain why mismatched characters find themselves together in a strange land. Now, Tim Seeley hopes to make sense of Injustice vs. Masters of the Universe #1. Instead, he ends up making a great comic for all ages!

The appeal to the younger audience is clear. The action is light but exhilarating, the comedy is ridiculous and a little juvenile. Nevertheless, that doesn’t stop Seeley from planting the seeds of an epic story. Using some of DC’s most important heroes and villains, he turns this crossover into something truly wonderful. Along for the ride is, undoubtedly, the best crossover comic artist in the business: Freddie Williams II. Aside from his ridiculous level of talent, his character designs have always perfectly melded the franchises he’s combining. There’s no wonder he’s the de facto artist for DC’s cross-overs.

More important than anything else, Injustice vs. Masters of the Universe #1 is just a fun read. It stars your favorite characters, displays them in beautifully awesome illustrations, and has them teaming up with some of your other favorite characters. With a debut as good as this, Injustice vs. Masters of the Universe could be one of the most crowd-pleasing series of the year!