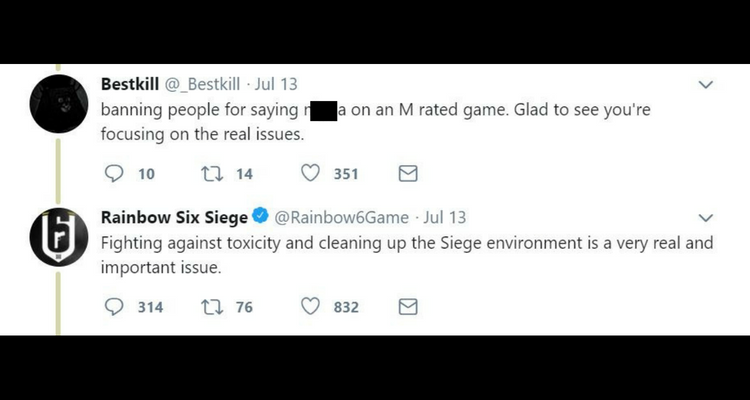 The official Rainbox Six Siege Twitter would go on to clarify they are specifically banning people for “toxicity.”

Toxicity is what causes bans, not cursing.

The “toxicity” bot is actually automatically banning players and when asked about it, the official Twitter account pointed to a post on their Developer’s blog from April.

Hello, you can find more information about this here > https://t.co/L4OZBWf3Od

“Toxicity management is a priority we will be focusing on as a team over the next few years, and we have a few different ways we plan on dealing with it. Our end goal is to track negative player behavior, manage those that behave poorly, and eventually implement features that will encourage players to improve their behavior.”

They revealed they are tracking the frequency of racial and homophobic slurs used by players and announced a ban system that involves four strikes. The first ban gets you 2 days, the second 7 days, the third 15 days, and the fourth is permanent. They did clarify that this isn’t a progression of bans and you can be permanently banned without receiving a warning. They described what constitutes a ban:

Players of the game are not happy with Ubisoft’s deployment of the automatic ban system without an in-game announcement. Many of them questioned why Ubisoft did not reveal a list of banned words and had suggestions for solving the problem instead of insta-banning players.

When the official r6 account is more toxic than someone saying a random bannable word. “We already have your money, you don’t matter anymore”.

@Rainbow6Game I did not get banned, but the way you handle this situation here is just fcking disgusting @Ubisoft @gameranx

@Ubisoft so why did i get banned for speaking about the coon in r6 siege? a character from one of your games!?

100% understand that. I just believe their prioritys are in the wrong area. The game is broken and all they care about is normal videogame behavior. I can talk you I haven’t heard more slurs till this whole ban came on. Instead of banning. Change the words like overwatch does

If you have a recording or username, please contact support.

it is lmao. fella if u see those fellas who say racist or offending things, then just ignore them or mute them lmao. just censor the words, not ban the people jesus christ. that was the funniest system i’ve seen in my entire life.

Hey siege i just left a bad review on steam (and hundreds of other people too) and told my friends to never buy this game, i hope you learn from this shit feature u brought and i hope it affects your business.

“ESRB Rating: Mature with Blood, Drug Reference, Strong Language, and Violence.” ~in the bio of R6S Twitter. But dont use strong language, you will get banned

You guys really screwed up big time on this “toxicity” ban. Almost anything you say gets you banned. If your game has a fanbase that memes. Don’t ban the fanbase. Can’t wait to see this ban thing get revoked from the company.

How is toxicity priority number 1 when I just finished a match and our bandit just fell through the map how. We lost that round not because someone said nibba in chat no it was because bandit fell into the upside down

One user was even banned for referring to another user named ChinkinArmour, as “Chink.‘ All he was doing was trying to determine which users were in his parties.

And another user got banned for referring to himself as “Paki.”

There was at least one person who applauded Ubisoft’s decision:

There’s a lot of other cynical BS that Ubisoft has done but as far as things go, R6 Seige is pretty unique. And I definitely commend them for cracking down on racism in this game. I just can’t get into the game. I wish Valve would do the same in CS:GO.

Like DC Comics Social Media Guideline, Ubisoft’s automatic ban filter seems to be up to the whims of their programmers. They are the ones who will choose what they deem “illegal, dangerous, threatening, abusive, obscene, vulgar, defamatory, hateful, racist, sexist, ethnically offensive or constituting harassment.” If you cursed out of emotion at an opponent after you just got gunned down, can you expect Ubisoft to ban you? If you tell someone, “I’m gonna kill you,” in a game about killing your opponents, will you be banned? Could that be deemed threatening by their bot? How are players supposed to know what exactly will get them banned if they have absolutely no idea.

Not only are their guidelines extremely vague, but they way they rolled out this ban was highly deceptive. Consumers should have known about this option or known it was being developed before they purchased the product. As some of the players and fans above mention, Ubisoft doesn’t care now that you’ve already purchased the game.

What do you think about Ubisoft’s automatic ban policy? Will it prevent you from purchasing future Ubisoft games?