For a while now, the Britannia series has done an excellent job of showing the world why it’s one of the most unique and entertaining books available in comics today. With its stellar combination of historical accuracy and outlandish horror, Britannia has impressed from a story telling standpoint as well as a visual one. Two satisfying story arcs down and the series shows no sign of stopping its trend of excellence as evidenced by the first issue of the new storyline, Britannia: Lost Eagles of Rome #1.

At this point in the story, Antonius is well known throughout Rome as a world class detectioner (ancient Rome’s version of a detective). His, at that time, revolutionary methods of using deductive reasoning and forensic studies make him an oddity among the rest of the Roman citizens. Even with his detractors, the current emperor, Nero, has found him useful enough to keep around. After proving himself a capable detectioner with the Lovecraftian horror of the first storyline, to the drug/voodoo induced trappings of the second, Antonius is called upon again to solve a, seemingly, much more banal mystery. The standards, in the shape of an eagle, that are carried at the front line of the Roman army have been stolen when the army was ambushed and waylaid by the savage German army. The Roman citizens see this as an embarrassment and begin to turn on Nero. He can’t have that, of course, so Nero once again employs Antonius to use his supernaturally given gifts to track down the standards and bring them home. 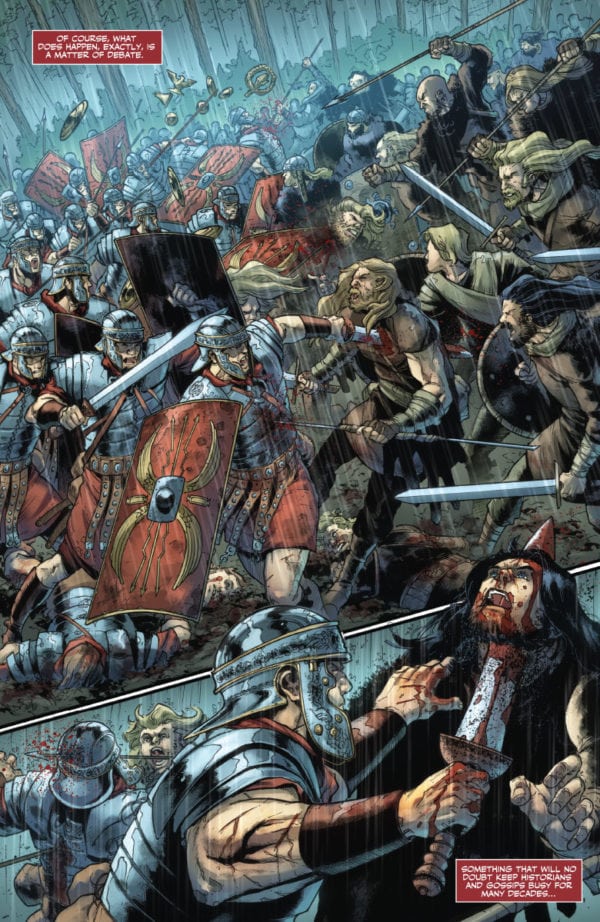 For anyone who may have kept up with the Britannia books thus far you might, justifiably, see this setup as a bit dull, especially considering how dynamic and horrifying the previous stories were. To that point, I would have to say that this particular issue is probably not the best issue for a newcomer to read to be introduced to this universe. In comparison to what has come before it, this issue is much slower and lacks the visceral horror, tension, and violence of the previous issues. It’s a much slower burn and besides the ever-present Rubria and her Vestal Virgins, there are almost no supernatural elements on display here.

I, however, have read every issue of Britannia thus far and as such I very much appreciated this slower introduction to a new storyline. Seeing Antonius take his time is a refreshing turn for the character and we actually get to see him put his deductive prowess to good use. He’s not slashing up villains left and right and while I do admit to missing the fantastic and visceral moments, I’m sure they’re on the way and that helped me to enjoy the more slow-burn nature of this issue.

One thing that has always made Britannia a pleasure to read is its strong cast of supporting characters. In addition to the aforementioned Rubria, Bran is back and is as funny and charming as ever in his goofy lug persona. He’s a constant source of levity to Antonius’ intense existence. Achillia returns from the last story arc and it appears she is here to stay. It’s nice for Antonius to have a partner who is a match for him physically, if not mentally. She’s also being set up as a potential love interest as well. Of all the great side characters though, the best is still Nero. 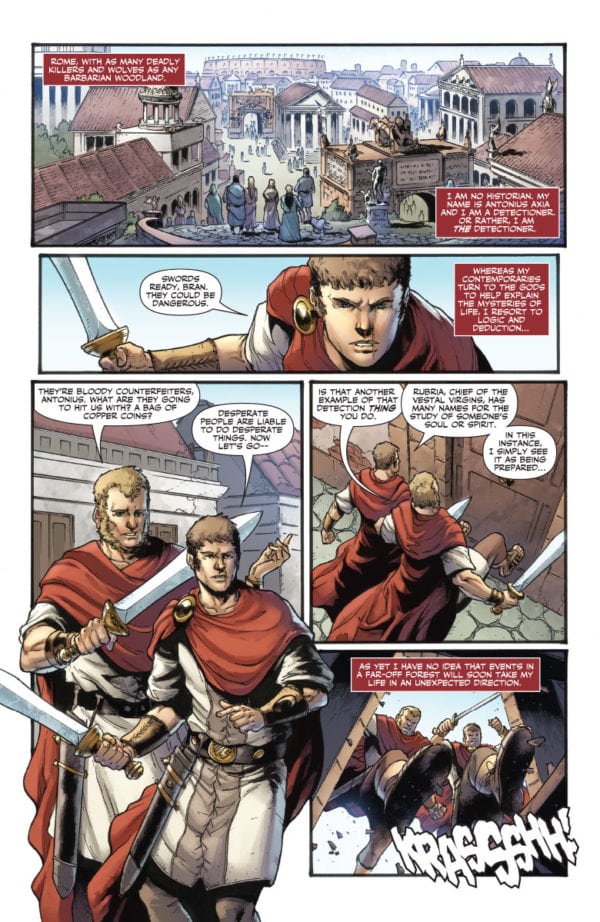 I know quite a bit about Nero as a historical figure from all my time in Bible College and writer Peter Milligan continues to capture the essence of him exactly as I always imagined him. He is, objectively, a terrible, despicable villain of an emperor, but he is a treat to see in this story. He is so despicable and over-the-top evil that the more reasons we are given to hate him, the more we want to see him. He continues to become more and more unhinged in each passing story and I can’t get enough of him!

The artwork from Robert Gill is unarguably excellent and in any other title, I would have absolutely NO complaints whatsoever. However, I can’t help but miss the amazing artwork of Juan Jose Ryp from the previous issues. Ryp’s depictions of the universe were pitch-perfect and a large part of why I love this series so much. While Gill’s art may not have grabbed me like Ryp’s did, it is still beautiful artwork. It’s highly detailed and does an excellent job of capturing the tone set by Milligan. I’m quite certain that it will grow on me in the coming months as it is, indeed, fantastic work.

While not as gripping an introductory issue as the past two, this is still an excellent issue and a compelling setup to what will surely be another epic story arc. Peter Milligan has more than proved his mastery of the Britannia universe and even with a slower start, I have no reason to think that this storyline won’t be just as good. In exchange for the crazy horror and visceral violence, we get a closer look at Antonius’ abilities as a detective as well as his growing, yet turbulent relationship with his son. If you’ve never read any of the Britannia books, definitely read the other two stories first, then pick this one up quick!