After James Gunn was fired by Disney for a number of sickening tweets involving pedophilia and child rape, more celebrities’ old Tweets are being exposed which cover the same subject. Those celebrities include Sarah Silverman, who stars in Disney’s upcoming Ralph Breaks the Internet: Wreck-It-Ralph 2, Ian Michael Black, who previously starred in Reno 911, Sean Gunn, James Gunn’s brother, who stars in Guardians of the Galaxy as well as Gilmore Girls, comedian Anthony Jeselnik, and Patton Oswalt, who lends his voice to a number of animated cartoons like Justice League Action, Spider-Man, and Disney’s Big Hero 6.

Many of these celebrities are claiming these Tweets are merely just “jokes.” Here’s a sample of some of the more tame ones. You can see more in the link above.

I don’t like watching “iCarly” with my daughter because there is nobody on that show I want to molest.

My dong is super-friendly and loves getting rubbed by children. #CareerEndingTwitterTypos

Hey, is it considered molestation if the child makes the first move? I’m gonna need a quick answer on this.

Today, right wing Twitter came after me out of the blue (again) because they took offense to a bunch of jokes I’ve made over the years (again). Why now? I suspect it has something to do with me asking @dloesh all week about Russian money-laundering at the NRA, but can’t prove it.

He would elaborate in a series of Tweets:

I don’t even think I know your mom. I make jokes about playing in the NFL. Guess what? I never played in the NFL. I could go on. The point is, I don’t think it’s a coincidence that the week I go hard after the NRA for being a mob front for Russia, I get this coordinated attack. 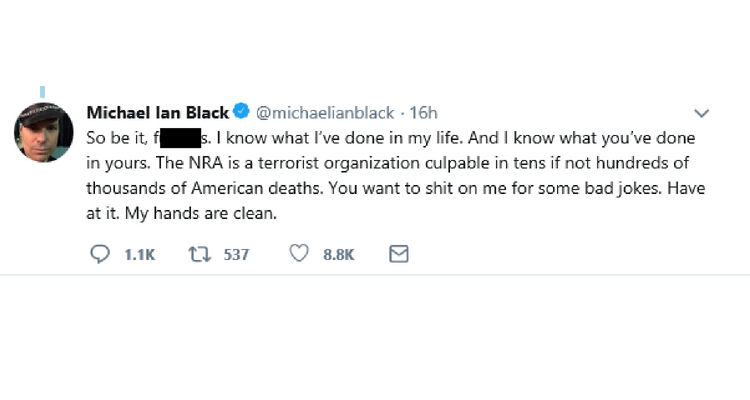 Silverman defended her own Tweets:

No they say PC culture is ruining the COUNTRY and then disingenuously act like obvious jokes and crystal clear gallows humor from actual comedians are making them clutch their pearls. They’re so shitty at being snowflakes https://t.co/pgSyARb70J

Jeselnik attempted to trivialize his Tweets.

Scrolling through my timeline for offensive tweets is like looking for a needle in a needle store on customer appreciation day. https://t.co/yPvRXYxbqt

Oswalt retweeted a user who said his Tweets are being taken out of context. 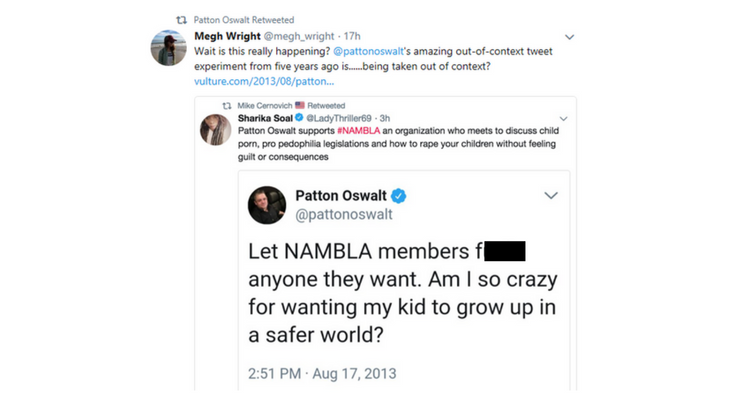 Do you think these people were just making “jokes” or is there a more sinister layer underneath?

Mike Cernovich, who has been instrumental in exposing these Tweets plans to call for Congress to begin an investigation into Hollywood’s “casting couch and child grooming practices.”

I want to clear something up about the James Gunn matter. pic.twitter.com/aCJOiUm1EF

Do you think a Congressional investigation should be launched into Hollywood and these actors?