After the outrageous events of the first issue, one might be forgiven for assuming that the second issue of Brother Nash would not match it in terms of over-the-top insanity. You’d be dead wrong, however, as issue #2 maintains the crazy ambiance of its predecessor while adding even more unbelievable characters and out-of-this-world situations.

Nash is on the road again following the deadly encounter that he and Billie faced at the end of the last issue. They manage to rendezvous with fellow trucker (and surprisingly, a Shaman) Ray at a diner out in the middle of nowhere named the Al and Moe’s Diner. Get it? Al and Moe’s? Alamo? The story takes place in Texas. It’s a pun. It’s funny. They are, of course, followed by the supremely weird insect-type monster people and  a large chunk of the story revolves around our heroes fighting the hordes off throughout the night while stranded at the diner. It evokes the nostalgia that stems from those classic horror movies like Dawn of the Dead or Dog Soldiers with our characters finding themselves holed up in one location while the horrors around them continue to close in. 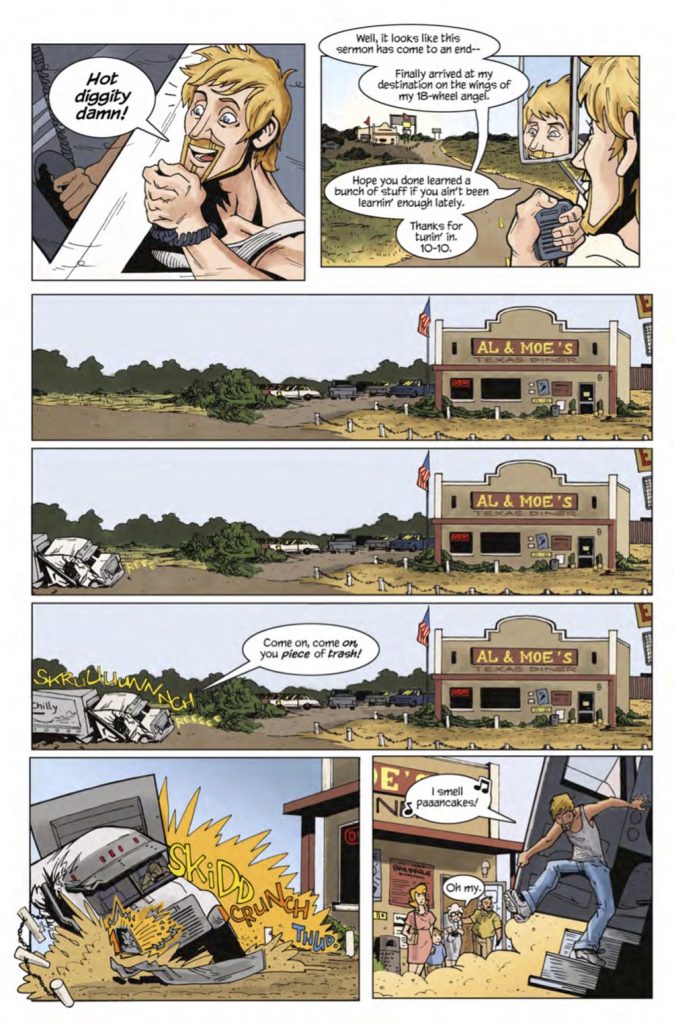 In addition to the freaky insect people, we get another healthy dose of werewolf action, Native American mysticism, and a better, deeper dive into the universe’s backstory which serves to set up this issue of Brother Nash as an even better issue than the first. Things that left me confused and shaking my head in confusion from the first issue are better explained and fleshed out here. The longer form story telling that Brother Nash offers, works well to immerse the reader into the world as well as giving the story more time to breathe and better explore character motives and backstory.

Characters in general are still the highlight of this book. Nash himself is an interesting lycanthrope, but even as the title character, he’s one of the least interesting. That’ not a knock on him either, but rather, a testament to how great these characters are. Billie is the one major player who has no supernatural powers (as of yet) but that fact helps her to be more identifiable to the reader as we kind of get to see, through her eyes, how we might react to being thrown into this horrifying and magical world. Ray, Nash’s best friend and fellow trucker, continues to be a huge bright spot in the story as well. He’s the only hillbilly Shaman I’ve ever seen in any medium and I can’t wait to see more of him. He’s genuinely charming and hilarious.

One of the biggest assets of Brother Nash, however, is its fantastic roster of villains. Insect people may seem ridiculous and even silly, but they are presented in such a way that they are truly menacing. Not the least of which is their leader who is of the same magical line of Nash. Instead of being imbued with the power of the wolf, however, he is given the persona of the tarantula and he is every bit as creepy and terrifying as a muscle-bound tarantula-man could possibly be. He and his cohorts are shaping up to be proper foils for our troop of heroes and the revelation of why they are trafficking humans from across the border is unsettling to say the least. 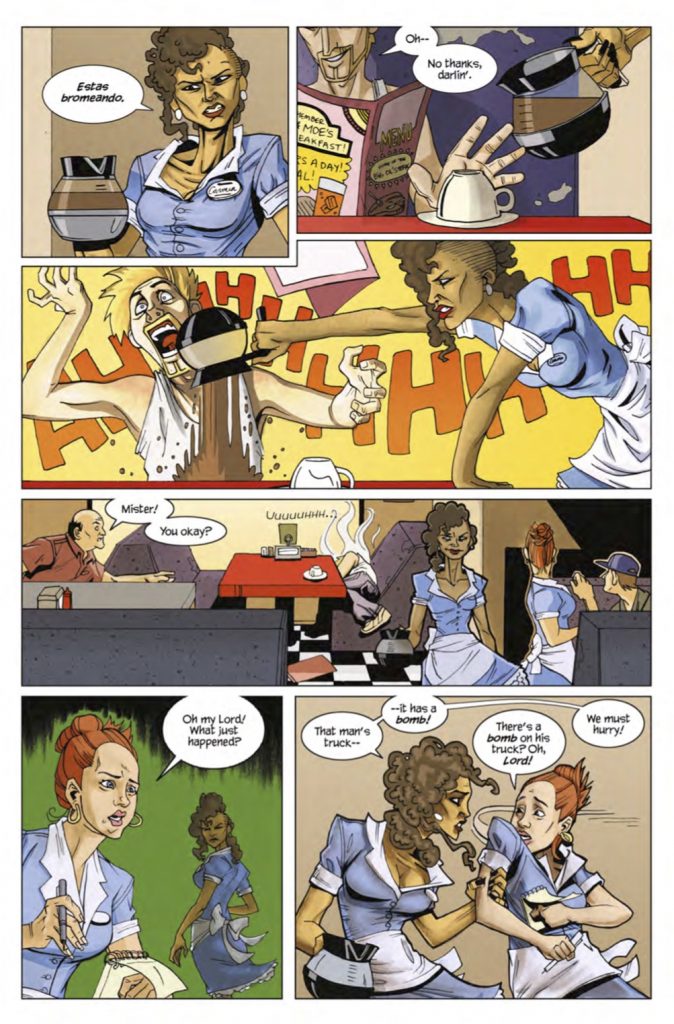 The artwork is terrific, if not always perfect. The cartoony aesthetics of the artwork help to offset some of the more horrific moments. It doesn’t always seem like it fits the tone of the story, but even the darker elements of the story never seem to lose the comedic, lighthearted edge of the rest of the book, so even though some of the character models are occasionally awkward or stilted, it mixes together with the story telling in a satisfying way.

Bridgit Connell, who is admirably handling both the writing as well as the artwork on Brother Nash, is doing an amazing job of translating a crazy story to the page and keeping it all cohesive and easy to understand when in lesser hands, it could easily go off the rails. Brother Nash is easily one of my favorite new comics of the year. It’s horrifying, exciting, fast-paced, and hilarious. The fact that the whole thing is wrapped in the trappings of traditional Native American folklore makes the whole ride a wild, but extremely satisfying comic book. This one gets HIGH reccomendations!