“Ha. This thing is ridiculous.”

The DC Universe isn’t doing so well at the moment. It’s under siege on almost every front. Being attacked by heroes, villains, and beings of unimaginable power. Worlds collide in Doomsday Clock #6, but only one real Watchmen character makes an appearance. Instead, this issue is more of a character-study. A not-so quiet and contemplative look at the history of one of the brand new characters. Marionette and Mime have been two of Geoff Johns greatest additions to the DC and Watchmen legacy. A fun couple who blend the powers of buffoonery with some genuinely awesome violence. Sound familiar? It makes sense for these wannabe clowns to wind up in the presence of the Clown Prince of Crime.

The Joker’s presence is one of the most exciting aspects of the issue. Geoff Johns has a wonderful voice for the character. A more comedic and lighthearted take compared to the modern interpretations of Tom King and Scott Snyder. In fact, every single issue is about bridging these harlequins together. The Joker, Marionette and Mime, and the Comedian all in the same room? Sounds like a recipe for disastrous mayhem. For better and worse, that’s exactly what Doomsday Clock #6 delivers.

“I can make him into anything you wish.”

Batman delivered right into Joker’s hands. That’s where last we left our heroes and villains, and that’s where we find them at the beginning of Doomsday Clock #6. Unfortunately, not much comes of that situation. Geoff Johns spends most of the issue establishing new characters, Marionette and Mime, into this brave and scary new world. Their history and chemistry makes for a great read. Unfortunately, it does little to forward the complex plot at the core of the Doomsday Clock story.

Marionette and Mime are surprisingly awesome additions to this new mythos, but they aren’t what fans signed up for. Having an entire issue dedicated to their backstory feels more like filler or a way to justify their existence, rather than the next real step in this wild adventure. The Joker carts Batman into a group of supervillains. An incredibly exciting prospect, right? Not necessarily connected to the Watchmen story, but an interesting premise. But nothing really comes of it. Just as the Comedian decides to interrupt the party, all of the characters and the plot seem to get lost in the chaos. 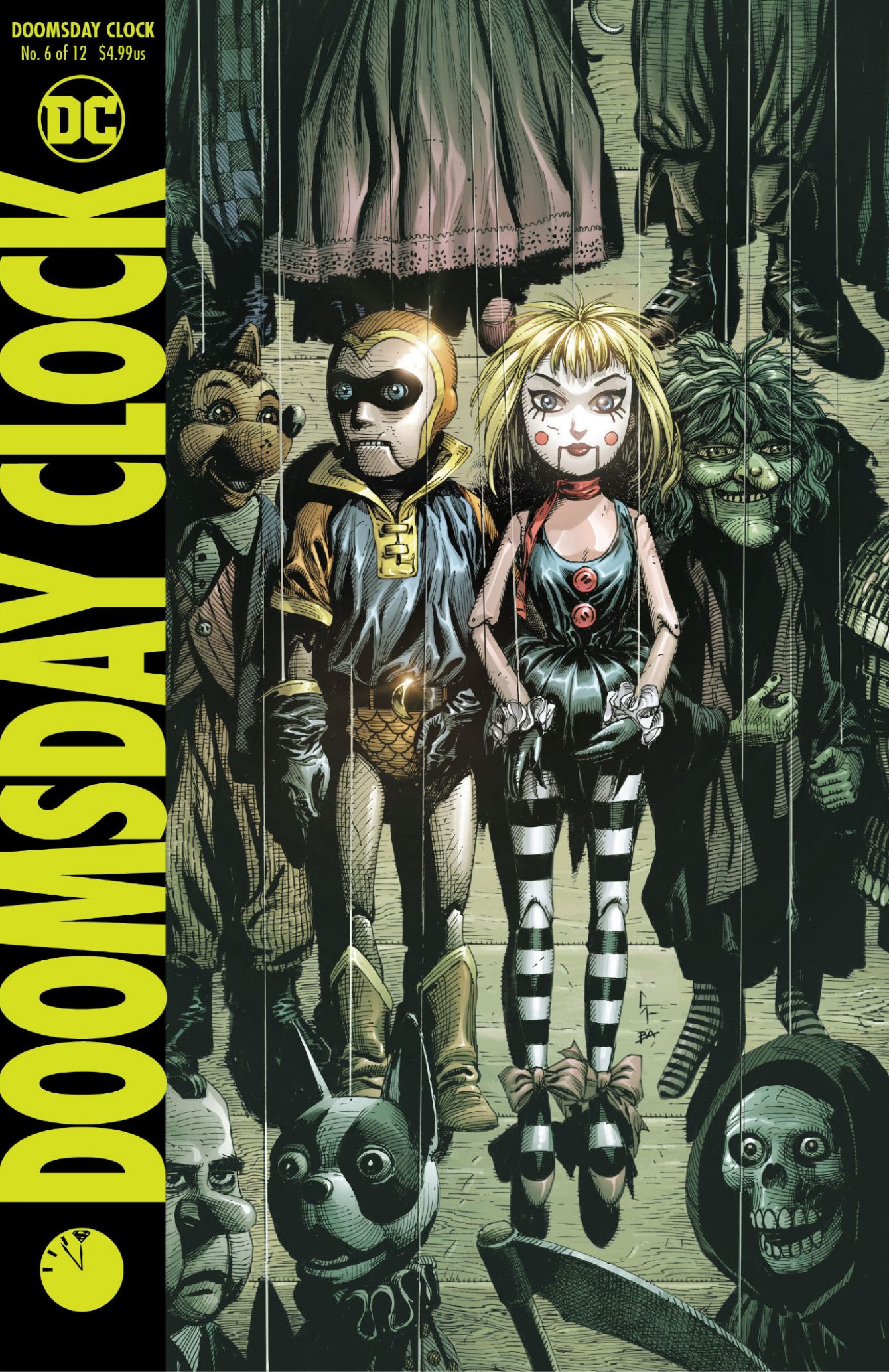 As the Doomsday Clock issues always feature abundant back-pages, it feels like that would have been a more appropriate place to establish these characters. While Doomsday Clock #6 is an entertaining ride, it contains much more spectacle than substance.

“The Comedian would be neat.”

The Joker wheeling an unconscious Batman into a crowd of villains. Marionette and Mime creating some surprisingly grotesque violence as children. Not exactly the easiest of images to illustrate. Luckily, Geoff Johns has an amazing partner-in-crime. Gary Frank is one of the best in the business. That goes without saying. His masterful designs and slightly crude perspective on the world makes for great comic book art. Still, like the writing itself, the most exciting parts of the story are a simple look at one of our favorite characters. Frank’s depiction of the Comedian, in particular, perfectly captures the horrifying and sarcastic tone of the character with every panel. Not every writer can make the 9-panel structure interesting. But somehow two of DC’s greatest artists are making mystifying work with such a technique: Mitch Gerads and Gary Frank.

Unlike the previous issues, some of the panels seem a bit rushed. The normally perfect and complicated pencils occasionally seem a bit too haggard. It never deters from the amazing displays and illustrations, but it’s noticeable when compared against the previous issues. Still, Doomsday Clock #6 is a worthy successor to the amazing work of Dave Gibbons. With the colors of Brad Anderson, Gary Frank can do almost no wrong.

The Joker, the Comedian, a Marionette and Mime walk into a room of supervillains…Just kidding. Well, actually, that’s not a joke at all. That’s actually the premise of Doomsday Clock #6. Though the concept seems exciting, it’s not explored as much as it should be. Instead, most of the issue takes a step back to explain the minds of Marionette and Mime, two of Geoff Johns’ additions to the DC Universe. It’s an interesting story and spin on the “supervillain” origin story. Unfortunately, it doesn’t seem to add much to the Doomsday Clock story.

The large cast of characters means that not every perspective can be in every book. So when every page is so important, it’s surprising to see an entire issue dedicated to some character work. A testament to Geoff Johns’ talent and skill, but a slight stall in the momentum of this unique comic event. If the plot isn’t moving forward, the overall story will become stale. Though there’s nothing wrong with looking at the beautiful Gary Frank art that comes with every issue. Gorgeous designs and captivating action cover every single panel and should grab your attention until the final page.

Doomsday Clock #6 is great and an in-depth look at some mysterious characters, but it’s a generally uneventful issue of a supposedly important event comic. At some point, these characters are finally going to get to the bottom of Dr. Manhattan’s presence in the DC Universe. But, when exactly is that going to happen? Every issue seems to hint at a new clue only to reveal a new mystery. Of course, any mystery by the likes of Geoff Johns and Gary Frank is worth a ride, but it’s time to get on with the story!