“You’re a piece of crap, Constantine.”

The Justice Leaguefamily is growing. After Scott Snyder introduced the idea of multiple teams a while ago, fans got excited. New Justice League’swith ridiculously mismatched members? Sounds like the perfect kind of comic. Justice League Dark #1 is the first of those titles. While this is an old team, it’s a new cast. It adds a wonderful mix of popular and mainstream DC heroes to the magically-enhanced team. James Tynion IV is the perfect writer to bring this story to life. Over the last few years, he’s developed into one of the greatest mystery writers in the business.

Now, the talented writer seems to have a new story in mind, one that alters the magic of the DC Universe, by teaming up some of its most peculiar heroes with some of the most famous. Wonder Woman, Detective Chimp, Zatanna and Swamp Thing are just a few members of this would-be team. It will take time for the entire team to form, but this is already a promising beginning. The team’s chemistry and adventures already appear to be fantastically weird, exactly what a comic about magical superheroes should be.

“But I can handle change just fine. Can you?”

Justice League Dark #1 literally sets the stage for a grand and mystifying story. Zatanna begins by performing a simple magic act on stage. Well, nothing in a comic is ever simple. Her magic suddenly turns against her and her very audience, until Wonder Woman arrives on the scene to recruit her. A simple set-up that leads to an explosive issue. 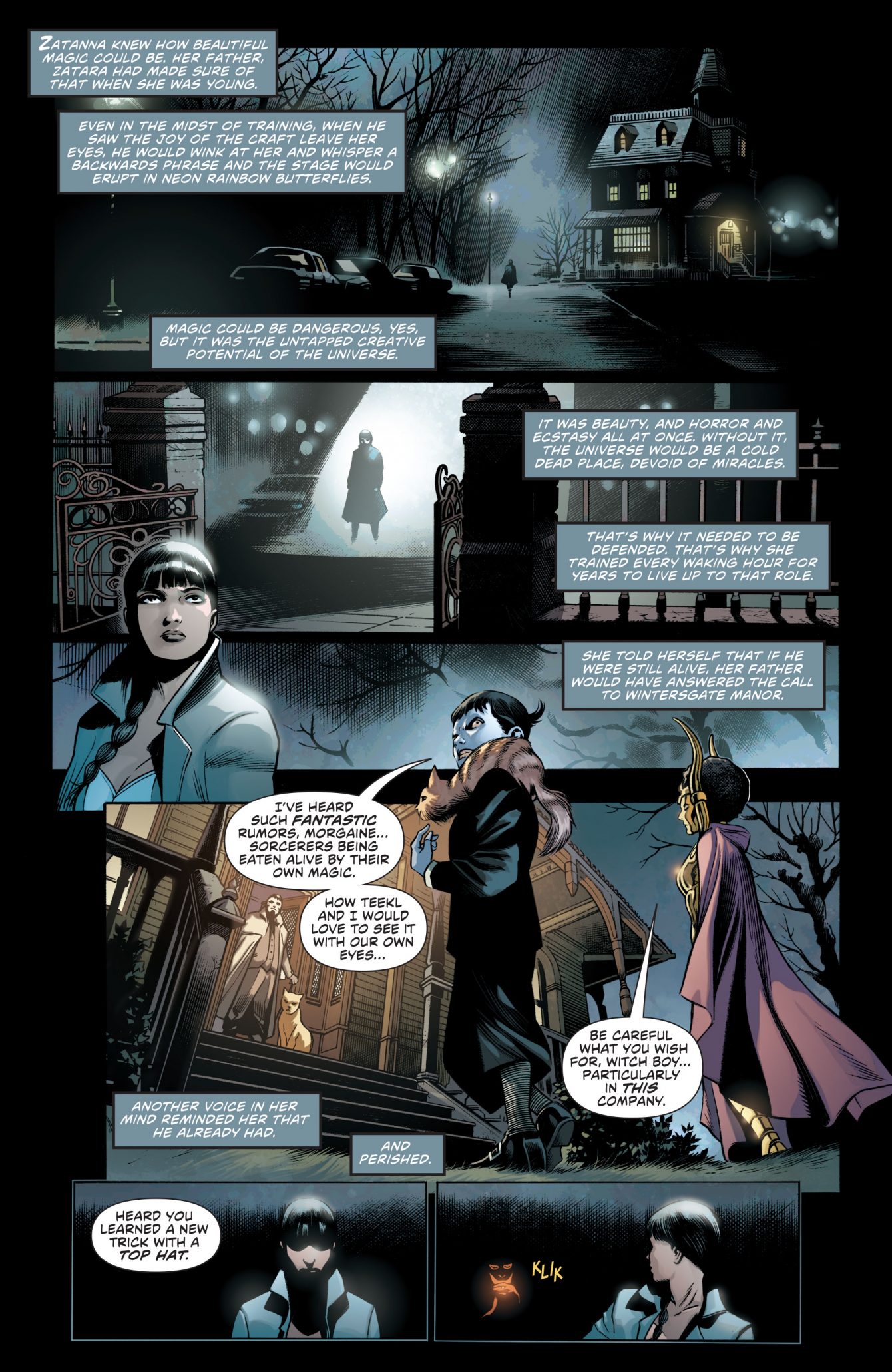 James Tynion IV makes clever use of the recent events of Justice League: No Justice. The Tree of Wonder has caused all manner of magical irregularities around the world, upsetting the balance of magic. Believe it or not, DC has more than one magical team. Justice League Dark is certainly more famous, but the Night Force is put to particularly good use in this issue. Every magical being is trying to figure out this imbalance. Unfortunately, they don’t all see eye to eye.

Wonder Woman’s crusade to find magical brothers or sisters-in-arms isn’t going well. All magical beings want a solution but they want their solution. Tynion uses this conflict to help throw together the final Justice League Dark team. Matching the magical users who value the world more than their own selfishness. It’s a great way to write relatable and likable characters, and it’s a great way to start this new magical crusade. The action never lets up from the very first page. It promises to be one of the most exciting and mesmerizing stories on the shelves.

“I think things are going to change, and I think that scares the crap out of them.”

DC has quite a few exciting worlds to play with. The Seven Seas, the Emotional Color Spectrum, and the realm of Magic. So much potential for beautiful illustrations. Thankfully, Alvaro Martinez Bueno is the artist for Justice League Dark #1. There’s so much splendid art and imagery in these pages it’s difficult to single anything out. Whether it’s the grotesquely horrifying cadavers lingering in the Hall of Justice or the beautiful displays of magic and shadow, every page is absolutely jaw-dropping. 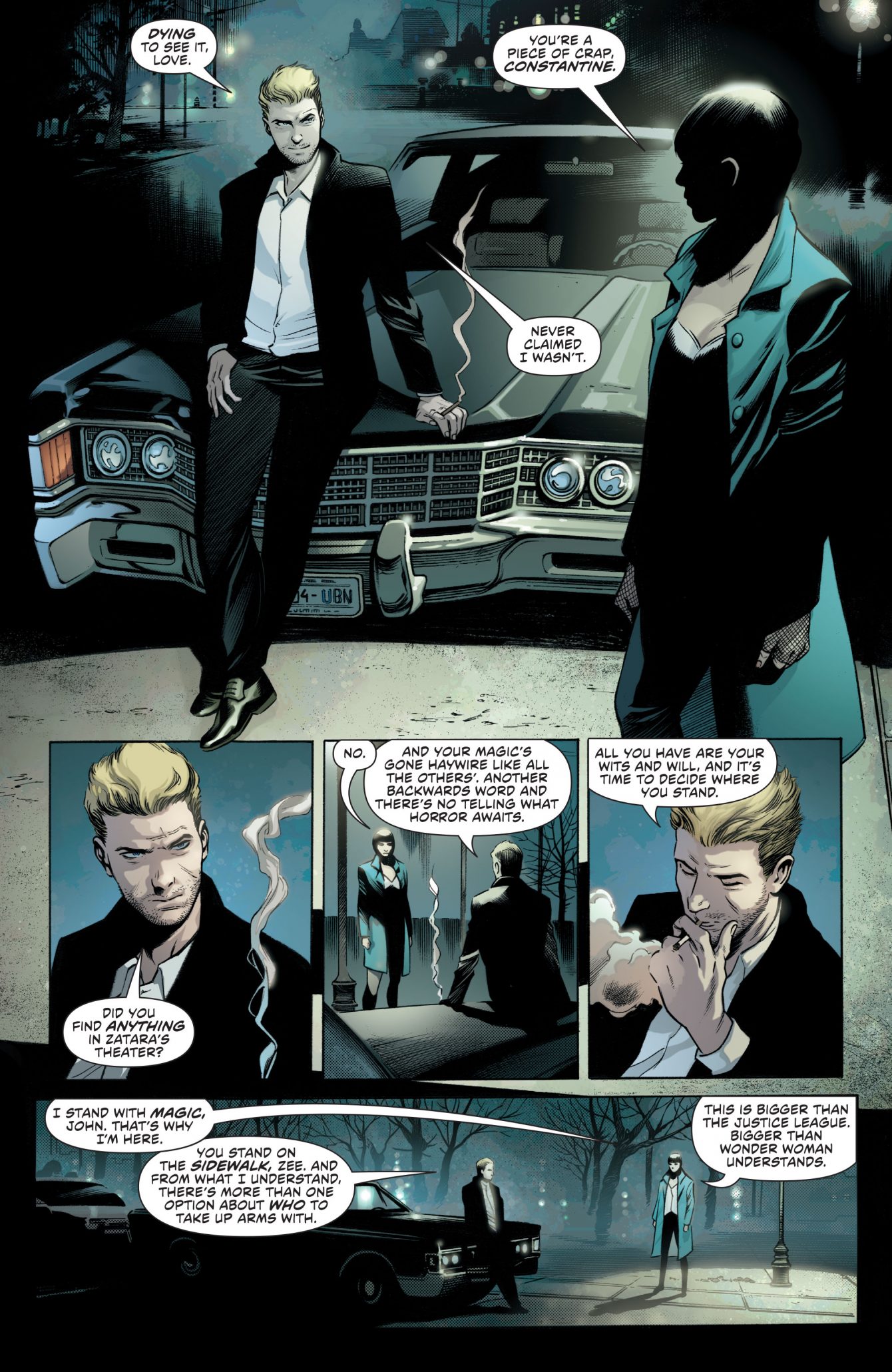 Watching Wonder Woman explode through the panels in a massive fight against a tentacle-monster is one of the most satisfying reads all year. The kind of beautiful action demands a poster someday. With action and destruction as awe-inspiring as this, let’s hope the DC Universe doesn’t get saved too soon. The inks by Raul Fernandez and the colors by Brad Anderson add even more depth and detail to the already-intricate pages of Justice League Dark #1. Let’s hope this creative team can remain intact and consistent for as long as possible.

A massive battle with a ridiculously-designed monster. Magical mishaps that force all kinds of creatures to gather and deliberate. One of the most famous DC heroes showing up to join the show. What more could a reader want in Justice League Dark #1? The amazingly-talented James Tynion IV writes his greatest debut yet. A mix of hilarious jokes and eye-catching action. Together, the Justice League Dark have formed against all odds. Out of the need to fight a battle against an unknown foe.

It’s not a new story, but it never feels as if it’s treading over old territory. This is a brand new threat appearing in a brand new way. Of course, with so many beautiful powers and characters in the story, there needs to be an amazing artist. Enter Alvaro Martinez Bueno, inker Raul Fernandez, and colorist Brad Anderson. The beautiful illustrations they deliver are absolutely unmissable for any comic fan. Watching Wonder Woman and Zatanna fight through beautiful settings and horrifying battles is some of the most exciting pages on today’s shelves.

Magic and superheroes don’t always work well together, but they’re not always written by James Tynion IV. His penchant for mystery and darkness makes him perfectly suited for the world of Justice League Dark. The DC Universe is getting darker and more dangerous for its’ heroes, but it couldn’t be a better time for the readers.