The Last Siege is a unique title in the knights-and-castles style genre. While most stories told within this backdrop employ elements of the fantastic such as dragons, orcs, elves, and the like, The Last Siege focuses on grounded, realistic situations, and exciting, yet mysterious characters. Typically this would lessen my interest in this story as I don’t look for realism in my entertainment and I love the fantasy elements that are usually found in this genre such that can be found in things like The Lord of the Rings. However, writer Landry Q. Walker has succeeded in capturing my interest more so than I would have thought.

After the out-of-nowhere, but exciting cliffhanger from the last issue, issue #2 wastes no time in bringing the reader right back into the fray. The mysterious stranger has assumed command of the last free kingdom in the land and the one major threat to the people’s freedom is being led away in chains… at first. Issue #2 of The Last Siege is split evenly between the remnants of the kingdom providing exposition while planning their next move and the deadly and dangerous prisoner, Sir Feist, planning and executing his escape and eventual revenge. One half is dialogue heavy while the other is action orientated, but both manage to be equally compelling, if for different reasons. 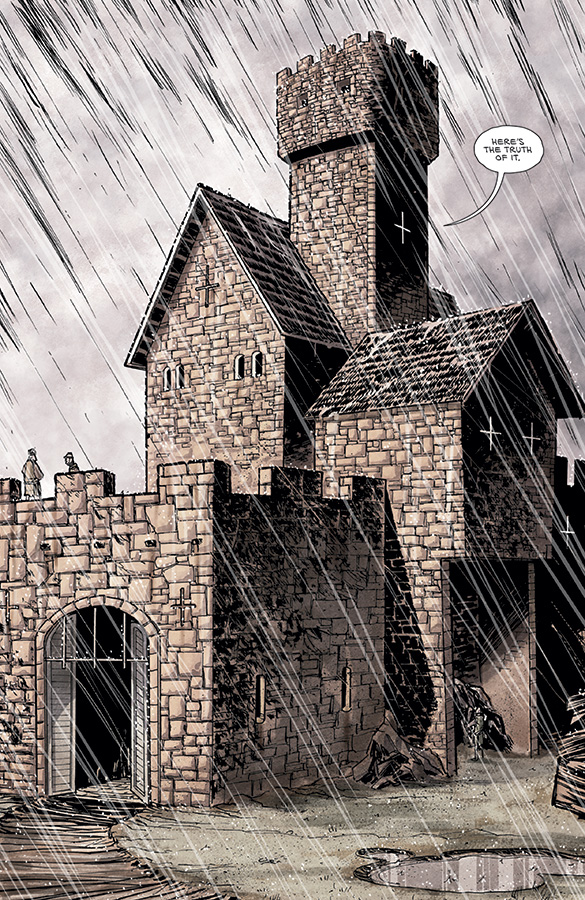 It’s still not clear where the mysterious stranger came from, but it is clear that he is incredibly skilled in both hand to hand combat as well as in tactical strategy. His claims to be sent by the former king have still yet to be substantiated completely, but the air of mystery that surrounds him makes for a far more compelling character, in my opinion. It’s not unlike characters like The Joker. Although they share no attributes between them, the less that is known about their past, the more interesting they are. I am certain we will be exposed to more of the Stranger as the story marches on, but for now he remains a fantastic enigma.

The rest of the kingdom seems to be split on whether or not they trust him as well, with some of them (rightfully) fearing the wrath of the warlord king for fighting against his attempts to overtake them. It sets the stage for some drama to come and the potential for that drama is expanded upon the realization that someone in the kingdom is a traitor. Good stuff!

The other part of the book revolves around Sir Feist and his attempts to escape bondage. This is the part of the story that contains all the action and the action it contains comes fast, furious, and violent! Feist’s prowess in combat is on full display much more so than it was in the first issue. He shows why he will be a fantastic and frightening villain moving forward. His eventual escape and promise of violent retribution sent a few chills down my spine and I can’t wait to see how things progress from here on out. 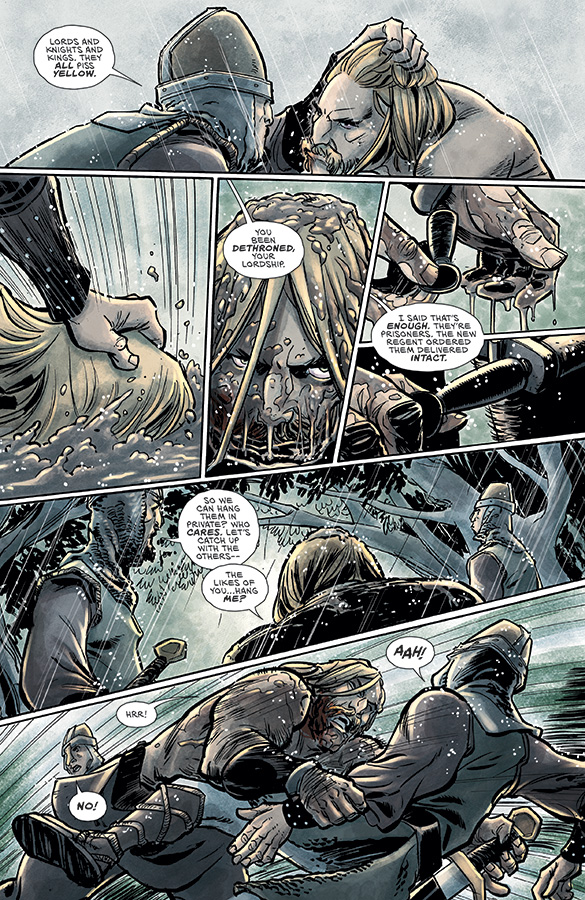 The book expertly balances the two disparate events and tones very well and even give the issue a very cinematic feel. However, I couldn’t help but feel that we are still missing out on some of what the book keeps talking about. Two issues in and we still haven’t seen even a trace of the outside world. Everything is localized within one small kingdom and while that’s not necessarily a bad thing, the characters continue to talk about foreign threats, a warlord king, the scores of other kingdoms which have fallen… and yet we aren’t privy to it at all. It’s hardly problematic and for some it might not be at all, but for me it just feels a bit like a low budget movie in which they talk about all the terrible things going on around them, but the production just doesn’t have the money to show any of it.

It’s still mainly high marks for this book though and that is thanks in no small part to the dynamic artwork from Justin Greenwood. There isn’t anything that leaps off the page that screams FANTASTIC!!!, but Greenwood has a wonderful knack for setting the tone with his depictions of a gloomy backdrop, emotional character models, and fast paced, cinematic action. Great attention is paid to backgrounds and foregrounds in equal measure, which is, surprisingly, a luxury we don’t always get with comic book artists. It’s not the art you’d want for every comic book out there, but Greenwood’s talents are pitch-perfect for the world of The Last Siege.

Two issues in, and The Last Siege continues to impress. The mystery of the characters, their motives, their backgrounds, etc. is what moves this story forward and hooks the reader into wanting to pick up the next issue as soon as possible. The world it is all set in, while not as explored as much as I would like, is also draped in mystery which adds another element of intrigue. The creative team is requiring us to be patient, but I have every reason to believe it will be worth it. All of that combined with a startling revelation on the last page makes The Last Siege #2 definitely worth your time.