Anne Hathaway, who played Catwoman in The Dark Knight Rises, took to Instagram to condemn America as a place where “ALL black people fear for their lives DAILY.”

Hathaway’s Instagram post stems from the tragic murder of Nia Wilson. The murder made headlines when police arrested 27-year-old John Cowell as the prime suspect for Wilson’s murder. Cowell is a white man, while Wilson was a black teenager.  Along with murdering Wilson, he also allegedly stabbed Wilson’s sister Lahtifa, who survived the stabbing. The tragic incident took place in Oakland, California on July 22nd.

Police discovered Cowell’s belongings after surveillance video captured him discarding his sweatshirt and backpack. Inside the backpack were items that allowed police to identify him by his name and date of birth.

It was a truly horrific attack, but Hathaway used it as a cultural bludgeon to speak about her and other white people’s “privileged bones,” before she declares that “ALL black people fear for their lives DAILY in America and have done so for GENERATIONS. White people DO NOT have equivalence for this fear of violence.”

She goes on to question, “Given those givens, we must ask our (white)selves – how “decent” are we really? Not in our intent, but in our actions? In our lack of action?”

The murder of Nia Wilson- may she rest in the power and peace she was denied here- is unspeakable AND MUST NOT be met with silence.  She is not a hash tag; she was a black woman and she was murdered in cold blood by a white man. White people- including me, including you- must take into the marrow of our privileged bones the truth that ALL black people fear for their lives DAILY in America and have done so for GENERATIONS.  White people DO NOT have equivalence for this fear of violence. Given those givens, we must ask our (white)selves- how “decent” are we really?  Not in our intent, but in our actions?  In our lack of action? Peace and prayers and JUSTICE for Nia and the Wilson family xx Note: the comments for this post are closed. #blacklivesmatter #antiracist #noexcuse #sayhername #earntherighttosayhername

It’s unclear why Hathaway is making this horrific murder about race. In fact, the parents of Cowell issued a statement claiming he had been suffering from mental illness, “He has been in & out of jail & has not had the proper treatment.” They mentioned he had been diagnosed with schizophrenia and bipolar disorder.

Cowell also had a previous record. According to CNN, he was convicted of second-degree robbery and assault with a deadly weapon in 2016. He was sentenced to two years in prison and was paroled in May of this year.

The Mayor of Oakland, Libby Schaaf also released a statement, “Although investigators currently have no evidence to conclude that this tragedy was racially motivated or that the suspect was affiliated with any hate groups, the fact that his victims were both young African American women stirs deep pain and palpable fear in all of us who acknowledge the reality that our country still suffers from a tragic and deeply racist history.”

This may not be a case of racism, after all, just a woman who fell victim to the lack of mental health care access we see in America today. If Cowell was treated and had access to better care than Nia Wilson would be alive today.

But this isn’t about the death of Nia, or the extreme mental health illness Cowell is facing. No, in my opinion, this is about using a tragic event, without all the facts and information in order to virtue signal how “progressive” one is.

Here we have someone of real privilege, through her wealth, fame, and reach, sharing her “enlightened” opinion about matters of race in America. This isn’t just about virtue signaling though. We are seeing someone using their power as a tool to divide a nation that right now is closing in on 1970s levels of civil violence. For what? To make herself feel like this: 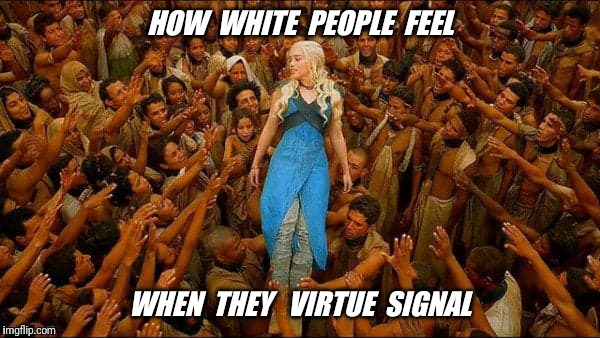 Anne Hathaway could have easily called for justice for Nia Wilson without invoking race. Why should race even play a part in this. An innocent teenage girl was brutally murdered. Justice is required, and that’s why we have a justice system. Does it sometimes fail? Sure. It’s managed by humans and none of us are perfect. But it’s one of the best systems the world has ever seen. And I have faith Nia Wilson will receive justice. In fact, they’ve already arrested John Cowell as their prime suspect and he has already had a hearing.

However, Anne Hathaway made it about race and she made sure to show “how progressive” she is. She took the call for justice off of Nia Wilson and made it a cry of racism, something that is not substantiated by the facts at this time.

Commenting without all of the facts, or better yet excluding them is pretty tactless.

Maybe, just maybe, Anne Hathaway should wait to get all of the facts before rushing to judgment.