Alright boys and girls, lock your doors; there’s a new drug on the street! Boom Studios’ new supernatural crime thriller, Bone Parish, explores the horrors of drug use in a new and completely unexpected way. When I first became familiar with the synopsis of the book , I assumed it would be another exercise in the crime/drug genre that has come before it so many times. That wouldn’t have necessarily made it a bad book, I just have to admit that I wasn’t all that excited about it. After reading through issue #1 however, I am can safely say that the end result is nothing quite like I’ve seen before and although some of the familiar genre trappings are still there, there’s plenty of spooky creativity on display to keep things fresh.

Writer Cullen Bunn is no stranger to the comic book world and has written for some of the biggest titles in the industry including Captain America, Conan, Drax, Wolverine, Godzilla, and more. However, it’s his talent and flair with the horror genre (I personally loved his six issue werewolf story, Wolf Moon from Vertigo Comics) that propels Bone Parish above and beyond other crime stories on the shelf. Bunn manages to create an ambiance that is equal parts gritty crime drama and gothic horror, with the aesthetics even resembling the classic Hammer Horror films at times. You never know quite if what you’re seeing is real, or part of the drug induced trip that the characters are experiencing. 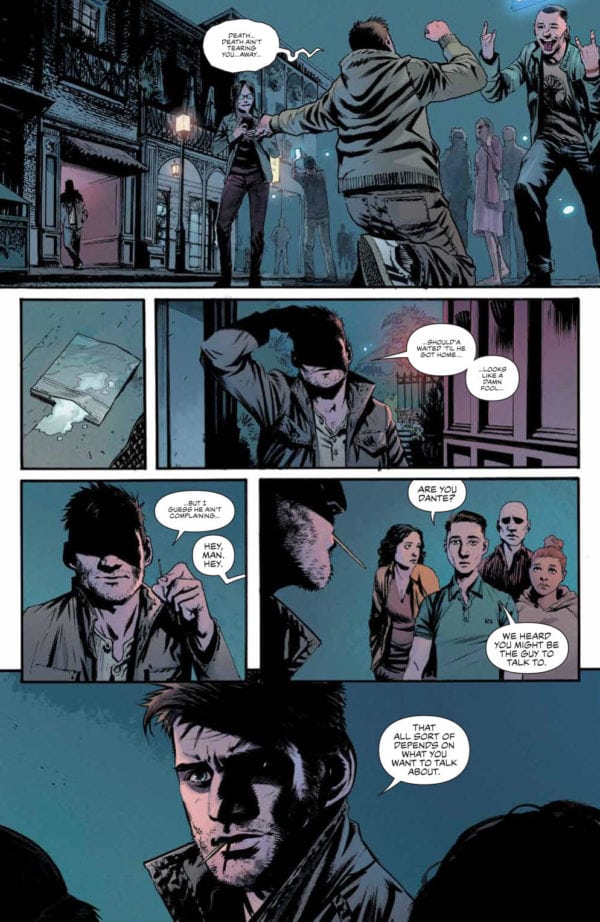 The aforementioned drug is the crux of this story but not only for what it does to its users, but also from where it comes from. You see, the drug in question that everyone can’t seem to get enough of is actually made from human remains. It gives the user a high like no other and actually convinces the user that they are inhabiting another reality. Users and pushers can’t seem to keep up with the demand which leads to, of course, more grave robbing. It’s the age old problem of supply vs demand that sets the drug family (and they are an actual family) at odds with one another as they can’t seem to agree on how to approach their ever expanding business. Add to that the external pressure to sell to the competition and you’ve got all the trappings of a classic drug-fueled family crime story. Of course, as this is a horror story, that’s not all there is to it.

From the very first page, Bone Parish is undeniably creepy. Graves being dug up in the dark of night and decomposing bodies stacked up in a makeshift lab are all you need to feel sufficiently creeped out but on the final pages, things take a turn for the horrific as the terrifying eventualities of using the drug are finally revealed. Bunn and company do a fine job of leaving it ambiguous enough so as not to tip us off to whether or not we’re witnessing true terrors or drug-induced hallucinations, but whichever it is, it’s horrifyingly compelling. On top of that, we also get a nice Sixth Sense style revelation. It’s certainly interesting and it caught me off guard, but I can’t help but feel the story may have been better served to save this particular revelation for a later issue. It could have easily been strung out and if it had, I think the “WOW” factor would have been substantially more potent. As it is, however, it’s still a fantastic ending to a first issue with two great reveals on the final pages. 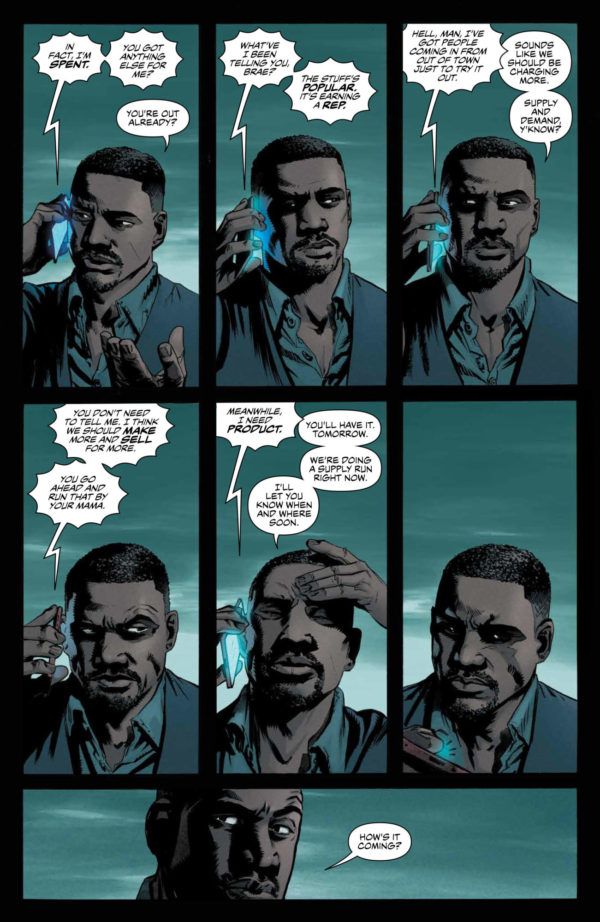 As far as artwork goes, I don’t know if you could do much better. Artist Jonas Scharf has done an excellent job of capturing the creepy, gothic aesthetics and marrying them with the urban, modern scenes. There’s an incredible level of detail on display here and the backgrounds as well as the characters are beautifully rendered. Every page is impressive and it culminates in the shocking final pages, all of which have the benefit of an added level of punch thanks to Scharf’s fantastic style.

Bone Parish caught me off guard and I am very glad that it did. What could have been another run-of-the-mill drug and family drama has the added benefit of being infused with a healthy dose of supernatural and creepy terror that puts this book in a category with very few others. The family dynamic is very strong here, which makes me think that the drama going forward will be intensified and we’ll get an even better chance to attach ourselves to these characters and be broken hearted when some of them eventually die in whatever gruesome ways Cullen Bunn has planned. I would have liked to see one of the final revelations stretched out a little longer, but besides that, I have nothing but compliments for Bone Parish. Bring on issue #2!