Social Justice Warriors (SJW) have made it their goal to infiltrate fandoms and take them over for awhile. They openly expressed their intentions for the comic book industry when former Comics Alliance editor-in-chief said, We need to get from some to enough. And really, we know we’ve achieved success when Captain America can have a boyfriend, and Wonder Woman can have a girlfriend.” And they’ve done a rather successful job of infiltrating the industry. However, their success at infiltrating the industry saw a decline in the industry overall with “retailer orders for comics, graphic novels, and magazines” down 10% from 2016.

Their next target appears to be tabletop gaming and the wildly successful Warhammer 40,000 franchise. 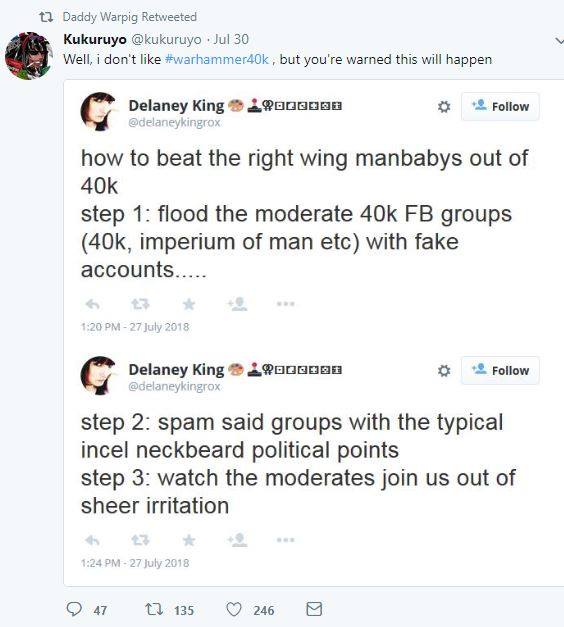 Delaney King claims the above Tweets are fake.

Pathetic fake.
I know how to correctly use capital letters at the start of sentences, the plural of ‘baby’ is ‘babies’, I don’t play 40k and I do not go to 40k forums (especially with a name like “imperium of man”).
‘Moderates’ is a term used by the right wing.

It’s unclear if they are fake, but doing an Advanced Twitter Search, turned up nothing. It’s possible they could have been deleted or they are just really good fakes.

However, she would still advocate similar SJW tactics for the Warhammer 40k franchise which she claims she doesn’t play.

My actual stance on man-babies in 40k is this…

Transform them into adult men with healthy masculinity by educating and holding GW responsible for addressing upholding toxic masculinity in their products.

And she had previously Tweeted about inserting SJW tactics into Warhammer 40k, a game she says she doesn’t play.

Writing female space marines back in to 40k isn’t being ‘politcally correct’- it’s simply not behaving like assholes to women anymore.

The Warhammer 40k universe loses nothing of value by adding female marines. Women gamers, and GW, gain much from inclusion however.

She is definitely advocating for Games Workshop to change the lore surrounding their game and implement female Space Marines. According to Lexicanum, females can not be Space Marines because “the zygotes are keyed to male hormones and issue types.” In fact, not all males can be Space Marines, “only a small percentage of people are compatible to receive the implants and hypno-suggestion to turn them into Marines.” While women can’t become Space Marines, they do serve the Imperium in a number of other roles including the Sisters of Battle formerly known as the Daughters of the Emperor. The organization has a military wing that roots out corruption and heresy within humanity especially on Adeptus Terra.

But why would Warhammer 40k all of a sudden be a target? I believe the answer is quite easy to see. Memes. Yes, I said memes. We all know that most folks on the SJW side are unable to meme if their lives depended on it. Now, why memes? Because since the 2016 election cycle, or as some call it, The Great Meme War of 2016, memes have done great damage to those on the far left.

The memes during the 2016 election cycle were everywhere. Here’s just a few examples: 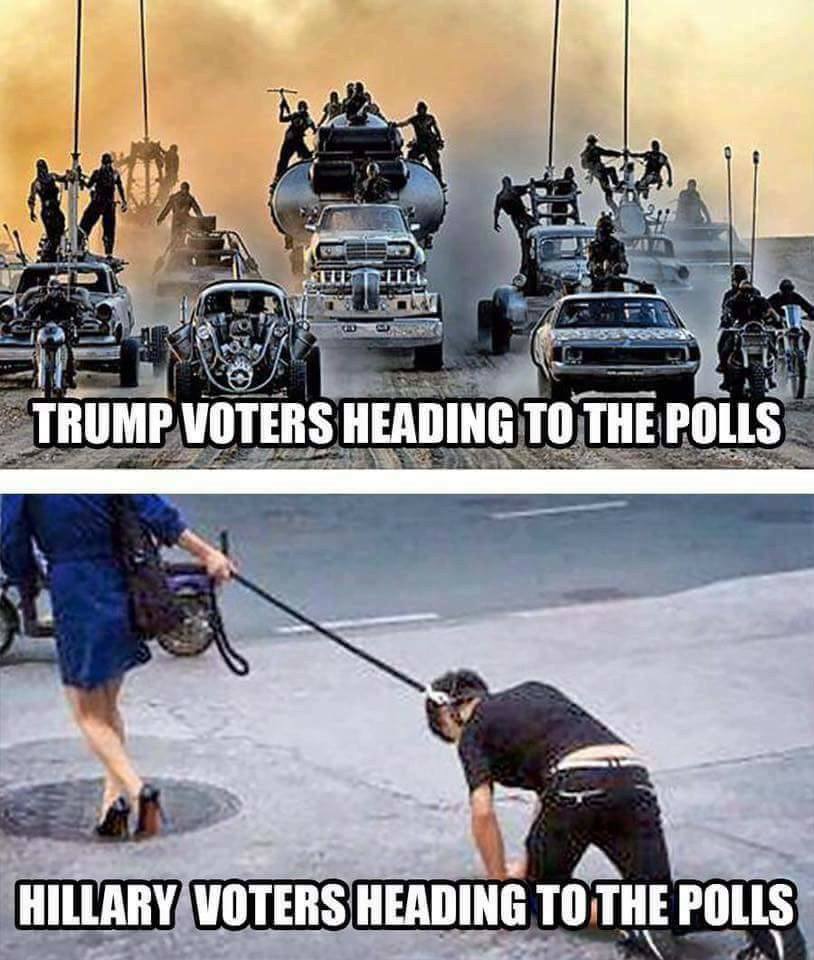 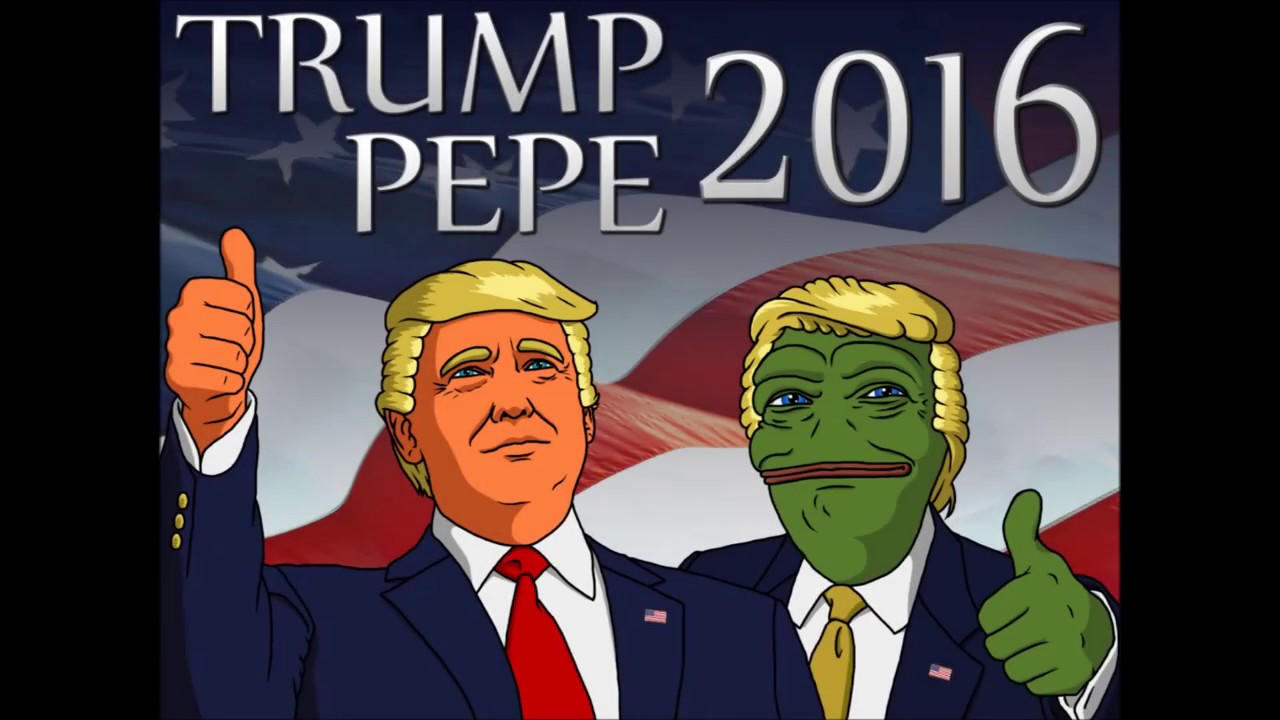 Now, what does this have to do with Warhammer? Well, it was one of the first, if not the first fandom, used to promote then candidate Donald Trump.

Here are a few: 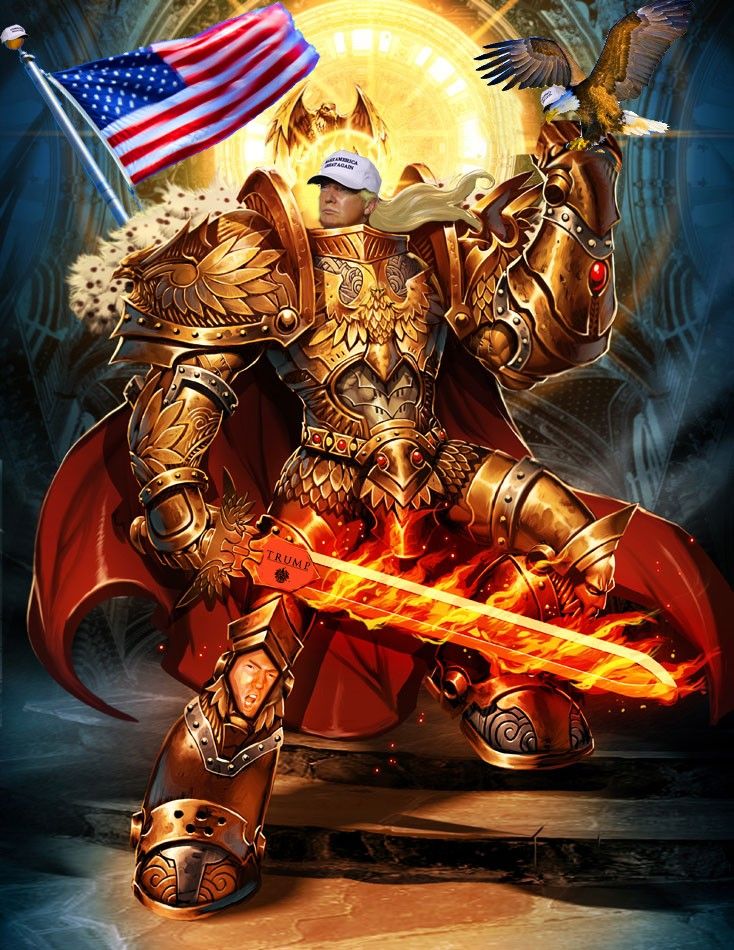 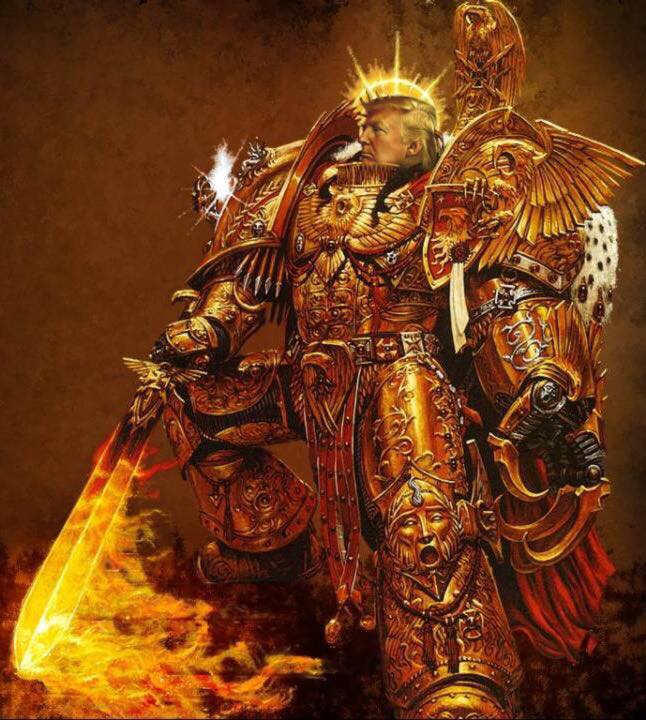 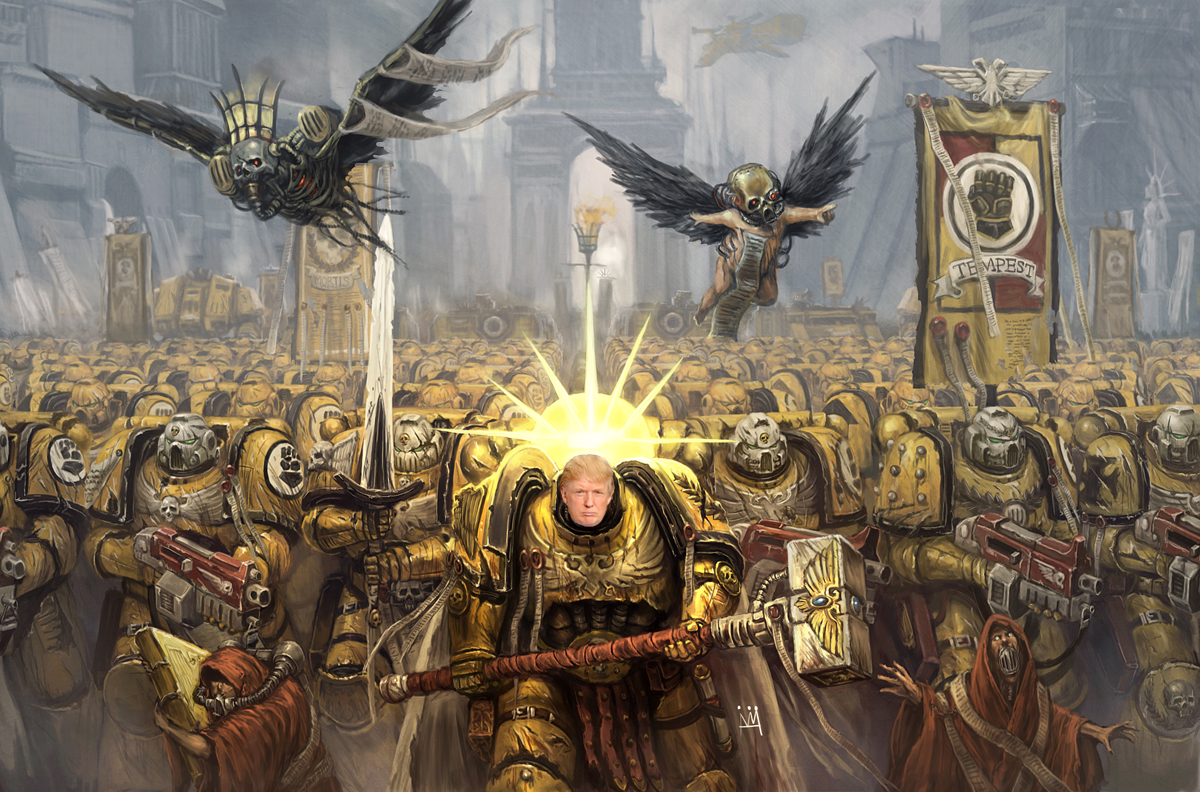 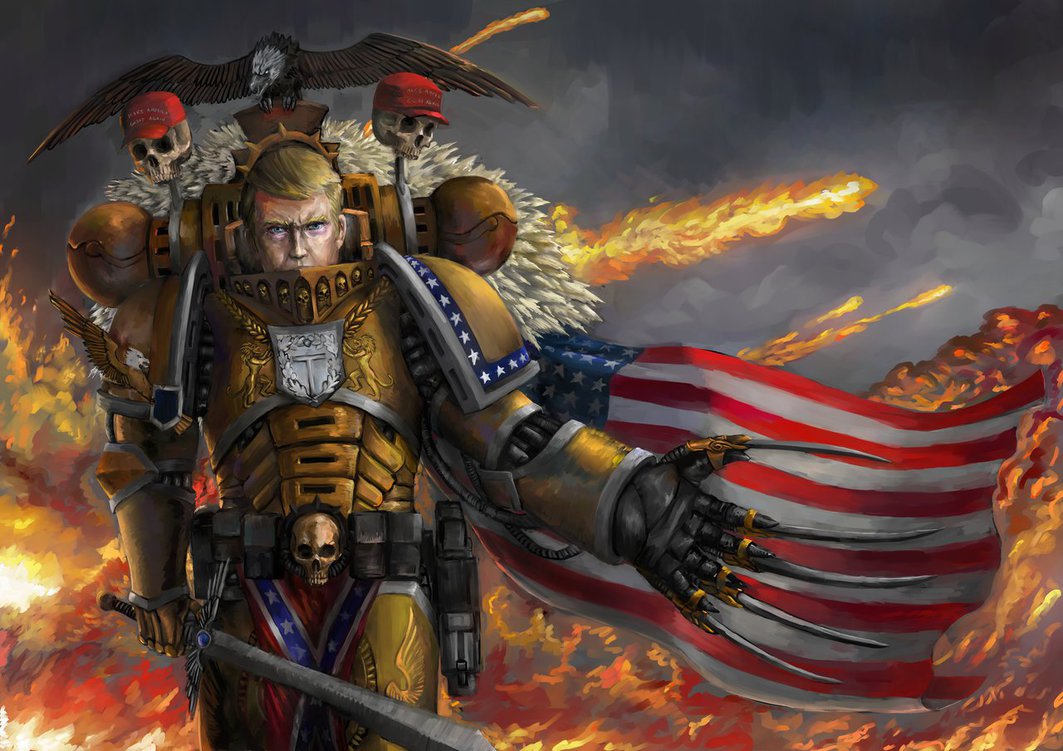 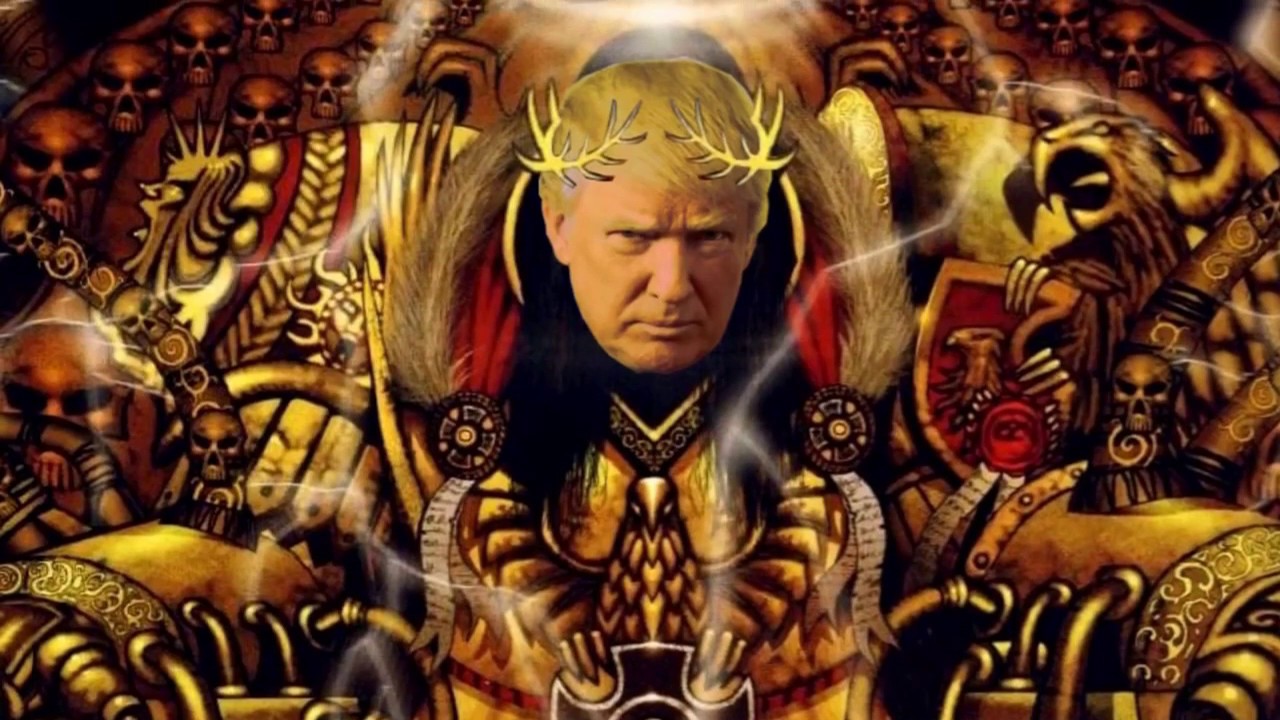 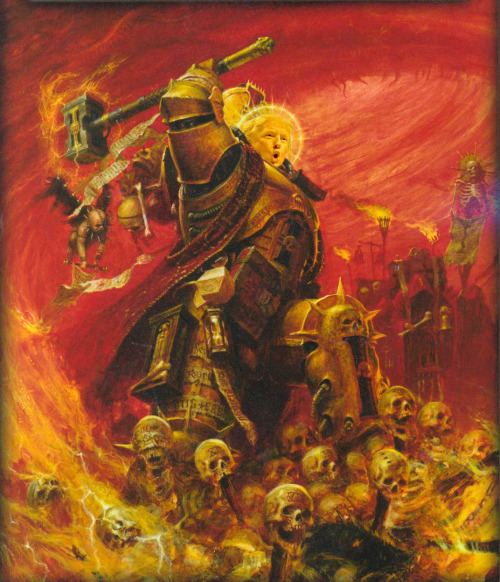 Given the prevalence of Warhammer 40k memes among Trump supporters, it’s no surprise that activist SJWs would see an opportunity to co-opt a fandom and turn it against those who have been supporting it for years and years. But as we’ve seen with comics this is not a financially beneficial decision.

But is this all just something that could be overblown? Is it possible that I’m making something out of nothing with all of this?

Honestly, I wish that I could say that the past would give me reasons to say so. But as we’ve seen over the years and in multiple fandoms it doesn’t seem to be the case. Again we saw it with gaming and the slow decade-plus journey of SJW’ers into both the industry specifically in gaming journalism.

But we’ve seen it recently pop up in Magic: The Gathering.

It’s no surprise to see SJWs target Warhammer 40k and try to change the lore of the beloved tabletop game.

But I want to hear, what do you think? Is this something that fans of Warhammer 40k should watch out for? Tell us and share your stories in the comments below and Twitter!