The story around the assault of The Quartering’s Jeremy Hambly appears to be getting worse. The promoters of the Gen Con are now silencing attendees who are fearful for their safety and are questioning Gencon’s silence over the assault. In fact, they are actively crushing ANY discussion on the manner.

They are specifically using 1984 style tactics on their Twitch channel. They first began giving users short bans if they brought up the assault, but then resorted to completely wiping their stream chat and limited it apparently to people who have been following for three months.

Gencon is blocking people asking for information on my attacker wtf https://t.co/WhBejVz3VW

Thanks to several Twitter users proof of the bans are clear. One user who was watching the GenCon live feed was told they were banned because “this isn’t the place to discuss this.”

The absolute state of @Gen_Con. From their Twitch stream, they’ve since closed the chat. By my count at least a hundred or so people have been banned for various posts regarding @TheQuartering’s assault or asking where they can bring their concerns to: pic.twitter.com/8KOu1Ot4vJ

Wow. That is wild. Everyone who brings anything up even remotely about this is instant banned.

Why is Gencon instabanning anyone asking about the assault on @TheQuartering and refusing to comment or help? What is this? Some kind of political double standard. Safety should be for all. Rules should be for all. https://t.co/X49TRBKTHm

I logged into my own Twitch account to confirm it. When I attempted to type into the chat I got a message that read, “This room is in 3 months followers-only mode.” 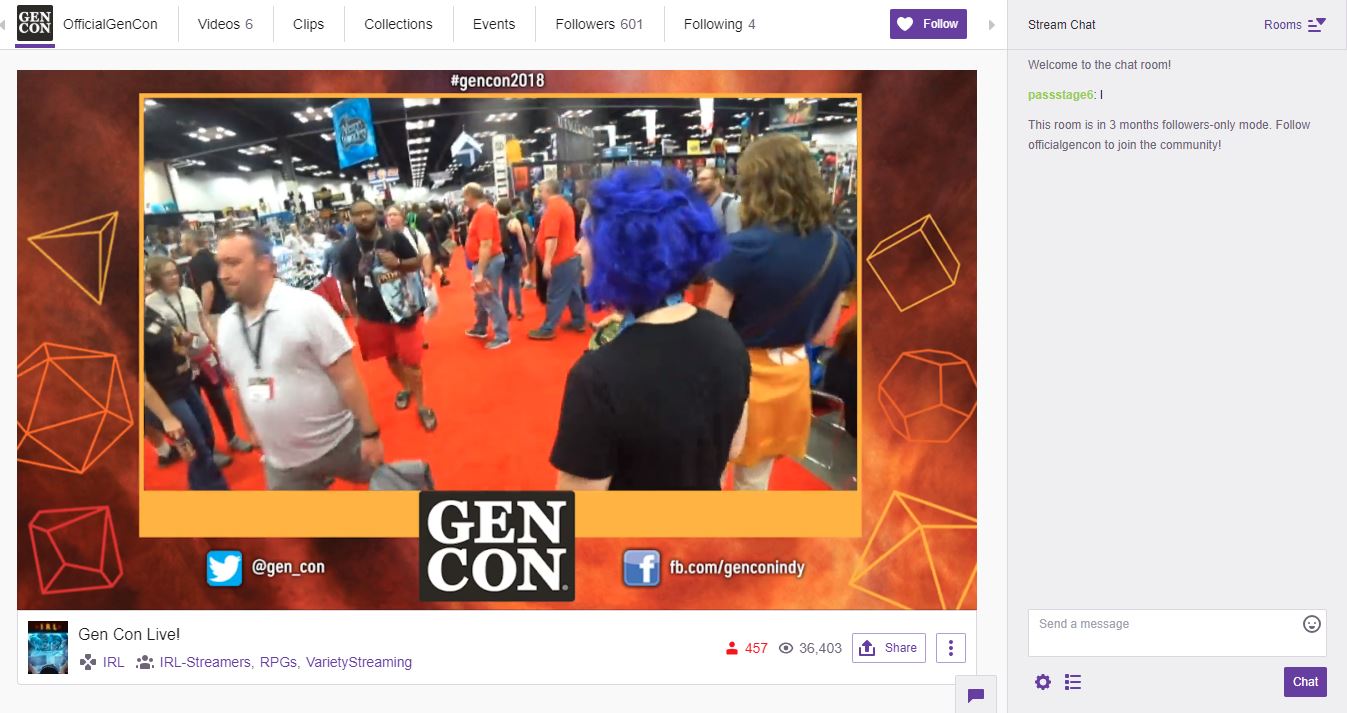 While GenCon appears to be banning people and silencing those asking about the alleged assault against The Quartering, they have remained silent about his alleged assaulter despite their own Ethics & Conduct stating that “Violating any federal, state or local laws, facility rules or convention policies … constitute grounds for explusion from the convention without refund.”

In fact, their policy instructs people to “seek out Gen Con Event Staff or Gen Con Security to report the incident.”

Given they still have not released a statement regarding one of their one exhibitors being accused of assault one has to wonder if Gen Con’s silence means other attendees could be at risk. Are they protecting a client who has a booth over attendees?

Or could their silence be politically motivated? If you happen to think the wrong way, well then it appears Gencon won’t do its due diligence when it comes to any possible violence you might face.

As for the attack itself. That sort of behavior is unacceptable. I don’t care if you’re someone I passionately disagree with. You don’t cross the line and take disagreements and turn them into violence. Shoe, another fellow YoTtuber like Jeremy Hambly, had a fair and clear statement about that very line of thinking in the thread below:

sorry there’s a huge difference between someone who openly advocates for an ethnostate and someone who just rants about nerd media online and has opinions you don’t like. you just like seeing people you dislike get hurt. that’s fucking weird.

Jeremy provided an update that was both disappointing and inspiring:

It’s inspiring that Jeremy decided to stay for the duration of Gencon. But it’s a sad state of affairs when a police department at the very least is neglectful in its duties, and at worse refuses to protect an innocent citizen from a clear case of battery. The precedent this is set not only for Gencon but for other cons is that they’re accepting to violence. or at least willing to throw a blind eye.

However, he did confirm that he just spoke with the police and filed a full report. He’s not confident that Indianapolis police officers will make the arrest, but he believes his assaulter will eventually be arrested.

He also confirmed he filed a police report.

As of this writing, the location of the alleged attacker, Matt Loter, is unknown and he’s still at-large.

What do you make of Gen Con’s silence on this matter? What do you think about them banning their users from discussing it?