“You sure you don’t want my help? I did learn from the best.”

Jon Kent and Damian Wayne are at it again. DC’s new duo took the world by storm in the recently-concluded Super Sons series. A wonderful story that was formed by three of DC’s most important artists: Patrick Gleason, Peter Tomasi, and Jorge Jimenez. Though not every one were present on every issue, their talent was felt throughout. Now, Peter Tomasi moves on to a new series debut with [easyazon_link identifier=”B07F6QHBR7″ locale=”US” tag=”boundingintocomics-20″]Adventures of the Super Sons #1[/easyazon_link]. An entertaining and fun continuation of one of the most crowd-pleasing comics starring DC heroes. Robin and Superboy are out on their own. Making it as a superhero isn’t easy, but when you’ve been trained by the best, well it still isn’t easy. That’s part of the fun.

Jorge Jimenez is now working on the Justice League series. Patrick Gleason is now working on Action Comics. So that leaves an empty space in the artist department. Enter penciller Carlo Barberi, inker Art Thibert, and colorist Protobunker. A solid team, but one that can’t quite fill those previous shoes. That’s not to say it isn’t a well-drawn issue. It absolutely is. Jon and Damian are incredibly expressive and distinct. The character designs are especially fun, considering a few of the more interesting reveals in the final pages. It’s the action that doesn’t live up to the team. Adventures of the Super Sons #1 is a great beginning to this journey, even if it has a few hiccups.

“Where are you going? I woulda gotten you some popcorn if you asked.”

At the end of the day, these are just kids. One of the best aspects of the Super Sons dynamic. Continued here in the pages of Adventures of the Super Sons #1, Peter Tomasi clearly knows these characters as well as any he’s previously written. Their voices are clear and unique, with a wonderful mix of wit and slapstick humor. Every page will fly by with a joke, a bit of drama, and some exhilarating action. 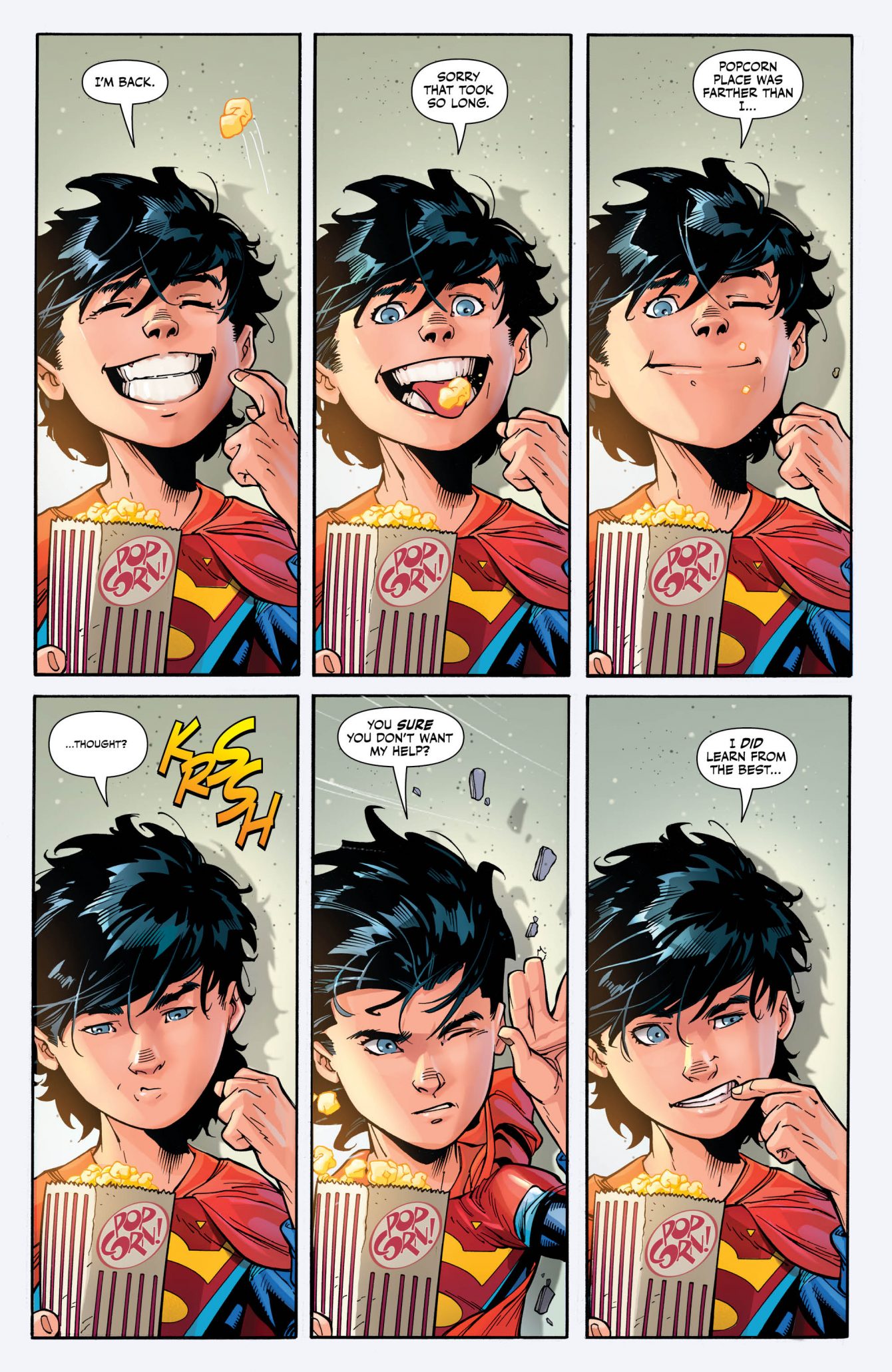 While the parents are away, the kids will play. That’s the theme at the center of Adventures of the Super Sons #1. Bruce, Clark, and Lois are all out of town. Meaning the boys are on their own, without the normal superhero-parent leash. That also means they don’t have back-up at the ready. An unsurprising consequence to taking on more “villain” than you can chew. At times, the lighthearted nature of the story gets in the way of the drama. The final page is a clear cliffhanger, but it’s hard to tell what the reader should take seriously when the characters never take any situation seriously.

Even as they enter dangerous situations in a death-defying way, they’re always just a couple of kids. Not quite as vigilant or “veteran” as they would like. They still have plenty to learn, and writer Peter Tomasi is always quick to write a lesson or two for them. Their stories are never easy, because of their insane ambition and growing hearts. Because at the core of every Jon and Damian story two kids are just trying their best to be like their heroic fathers. A charming and lovable idea that helps make Adventures of the Super Sons #1 a charming and lovable read.

“I will not be defeated by a child, not when I’m so close.”

And yet that’s probably what’s going to happen when you’re a villain in a Super Sons comic. Carlo Barberi illustrates Adventures of the Super Sons #1. A bright and vibrant issue with inspired character designs. The last few pages contain a few hilarious characters and cameos, thanks to the wonderful ludicrousness of Peter Tomasi’s script. Barberi takes those ideas and brings to life absolute comic gold. Whether you die from laughter or think the new “supervillain team” is just ridiculous enough to be awesome, you won’t be disappointed by the page. 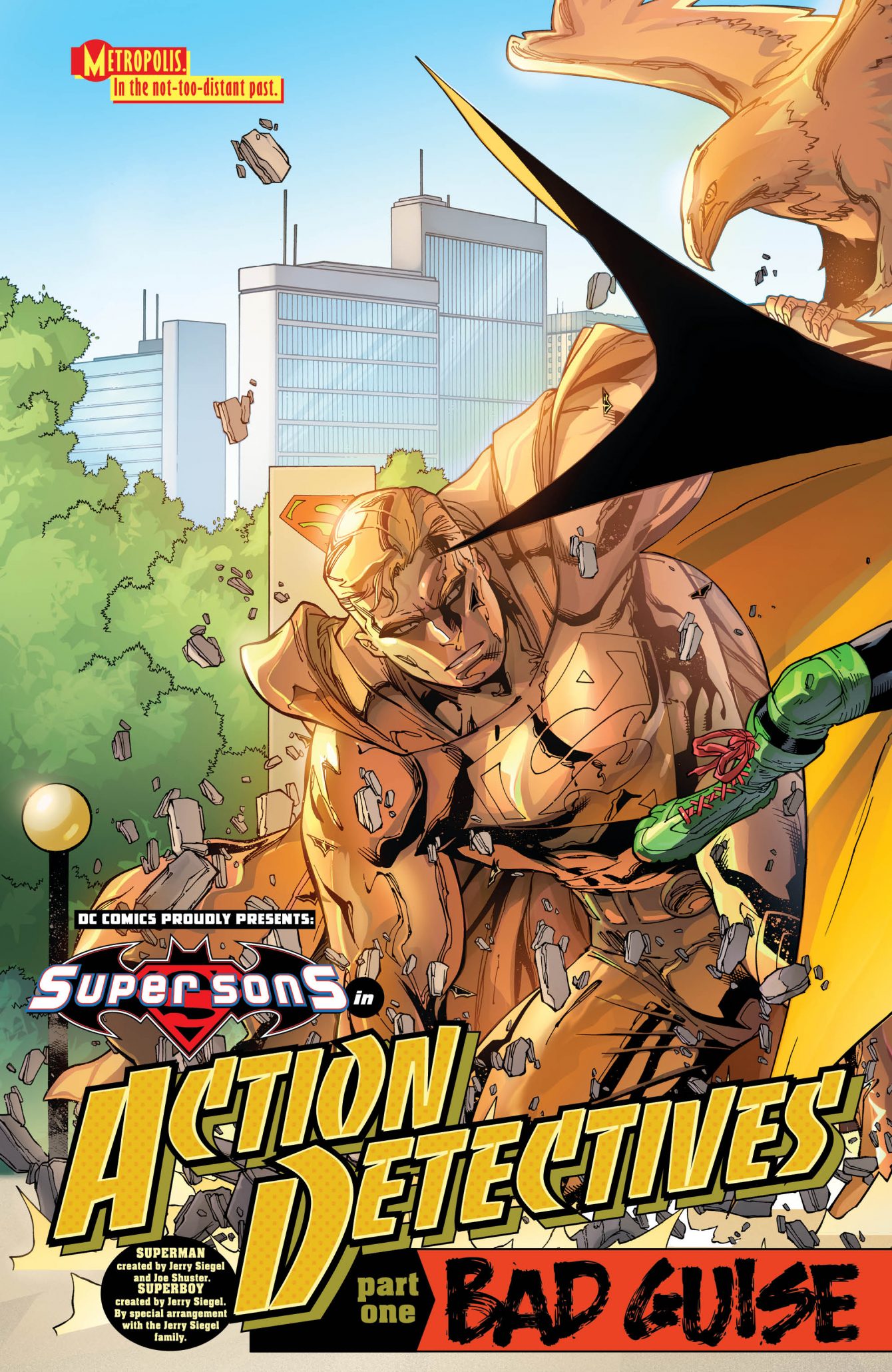 The only truth is you may be disappointed by some of the pages. Some of the action lacks a certain layer of detail that helps make modern comics more explosive. More engaging. Instead, some of the pages look like the free comics you get with a box of cereal, or the fake comic ads that come within comic pages. The issue has plenty of great work to appreciate, but since Rebirth most of DC’s more prestigious titles have excelled in the art department. Hopefully, the next 11 issues in the series can build on these excellent designs with more eye-catching work.

The Super Sons team was one of the greatest Rebirth titles. It bridged the gaps between drama and comedy, kid comics, and more mature comics. Superboy and Robin make for a great team, but it’s Damian and Jon who are the real heroes. Just a couple of kids trying to live up to the massive shadows of the famous superheroes that created them. The fun and entertainment of that struggle is what makes [easyazon_link identifier=”B07F6QHBR7″ locale=”US” tag=”boundingintocomics-20″]Adventures of the Super Sons #1[/easyazon_link] a fun debut. While it doesn’t pack the same punch of the previous title’s debut, writer Peter Tomasi is having a great team.

Artist Carlo Barberi is too. The talented illustrator brings to life some of the quirkiest character designs in recent comic memory. A mix of awesome, horrifying and positively adorable. Unfortunately, the same level of effort doesn’t transfer over to the action. When fighting on city streets or against bronze Superman statues, the kids look a bit old. Sometimes having the appearance of a displaced 90’s comic rather than art and colors coming out in 2018. Hopefully, the rest of the series can deliver some more exciting panels and pages.

The adventures of Jon and Damian have become an important part of DC Comics. The Adventures of the Super Sons #1  and the rest of the series won’t be the last tale in their story. It probably won’t be the most significant. But it’s a fun, funny, and heartwarming rollercoaster starring DC’s prodigal sons. A simple formula that amounts to a great read.