You Certainly Can’t Fight A Bomb With A Knife, But You Can Bypass Hours Of Gameplay With A Good Book

For a long while, most of the knowledge I possessed having to do with the Assassin’s Creed franchise came from the something-teen hours I dropped into a game I quit a few years back. Listen, I got lost in the woods and repeatedly killed by wolves (don’t judge me). I also never got around to watching the live-action movie despite very much liking the trailers set to the Kanye West track.

However, my passing familiarity with the franchise didn’t deter me from being intrigued by the lore. Throughout the years, following my failed gaming endeavor, I casually skimped various wikis. Believe me, the tales of The Brotherhood of Assassin’s and their foes The Templars battling throughout time is rich and intriguing all on its own. I do wish I found my way out of that blasted snow-covered forest and continued with the story. If for nothing else to see the narrative play out. Thankfully, Assassin’s Creed: Conspiracies is just the shot to the arm and vehicle to close the gap. 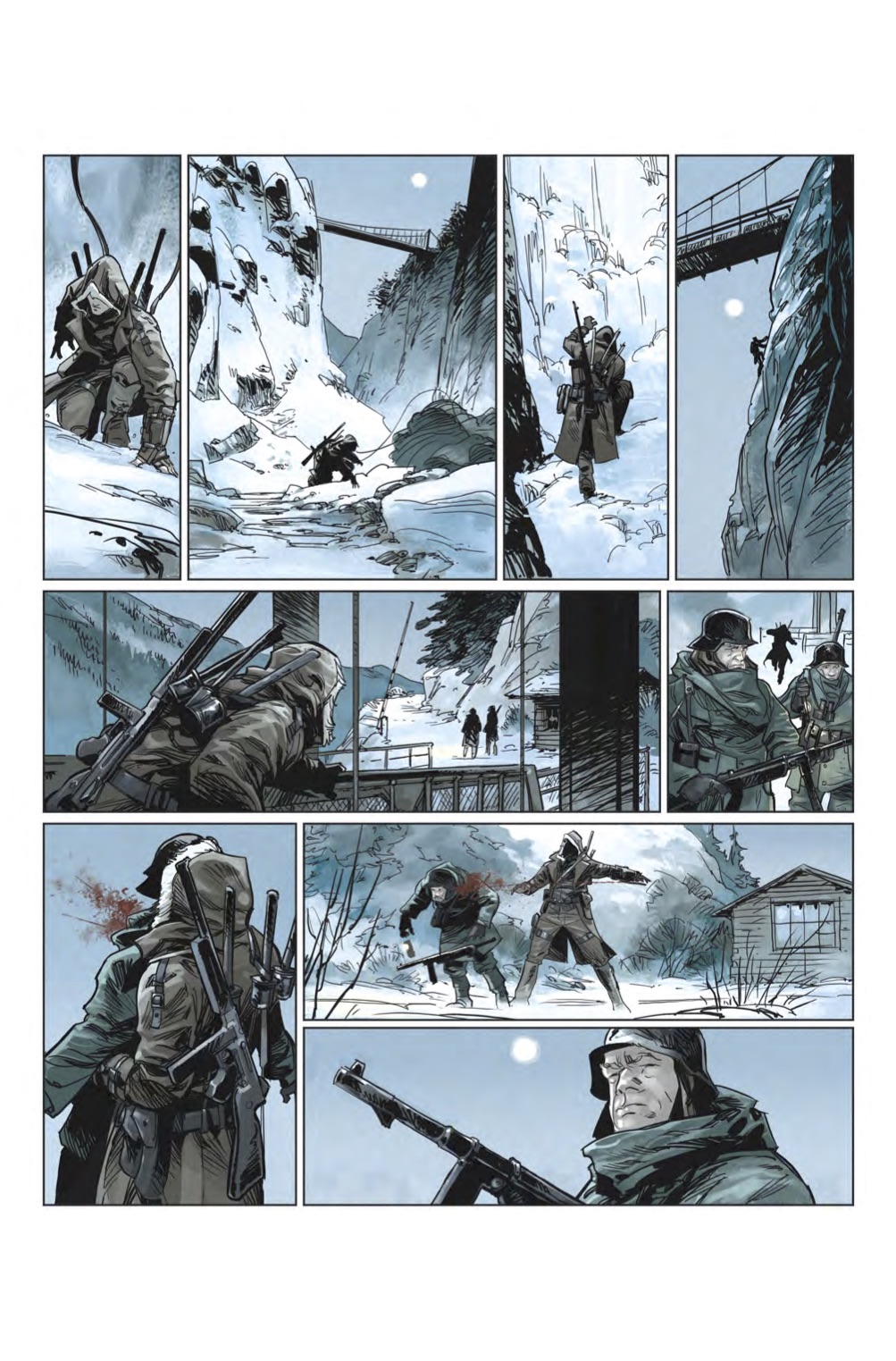 Following a rousingly nostalgic excursion through a frosted-wooded area of Norway where we witness a prototypical, hooded, Assassin make quick work of some unsuspecting soldiers, writer Guillaume Dorison and artist Jean-Baptiste Hostache drop us smack dab amid 1940 WWII London. Our point-of-view character is Eddie Gorm, a former Royal Navy-man, now Robin Hoody dock-worker that cares for his deceased brother’s widow, Maria, and children Justine and Paul.

Times are hard, but Eddie lives by a code of honor and refuses to cross certain lines; something he demonstrates when he turns down the opportunity to make money in the form of running jobs for a gangster. While the story is quite slow up to this point, Dorison’s narrative, amplified by Hostache’s inks seem to draw you in as the intrigue is kicked up five-notches. We begin to realize, no one we’ve been introduced to is quite what they seem to be. 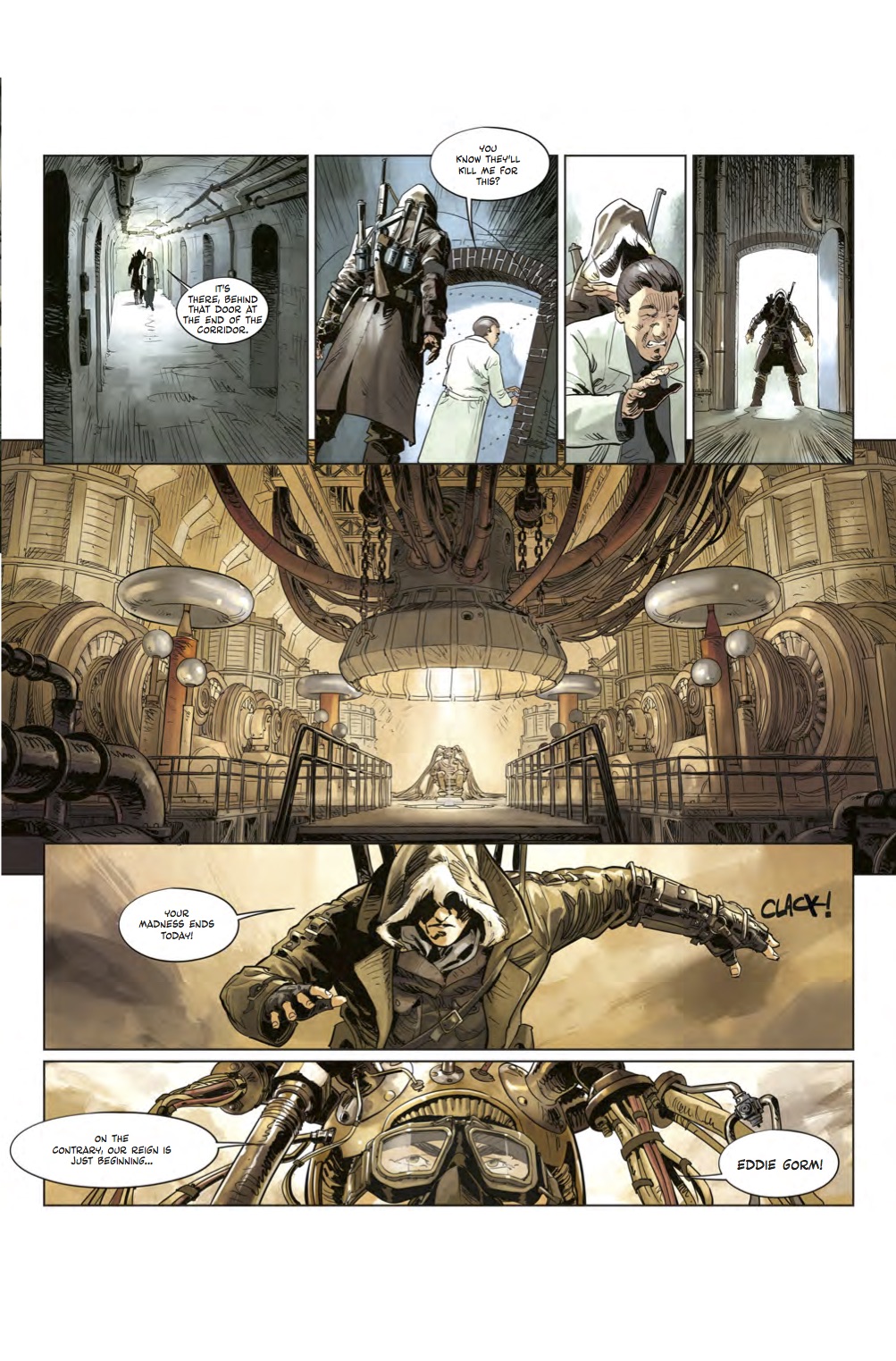 Outside of a couple odd transitions between panels, and the aforementioned slower development between the opening scene and set-up, Assassin’s Creed: Conspiracies #1 eventually turns into an intriguing page-turner, I can only compare to some of the best action-thrillers Hollywood has to offer. Not quite a spy-flick or a political roller-coaster, Dorison finds a comfortable middle-ground steeped in the backdrop of WWII just as London is bombed, an event that costs Gorm dearly.

After this, he decides to take a more active role in the fight to thwart Nazi Germany, a government that is evidently waging war due to the machinations of The Templars. In a single book we see Gorm transform from an honor-bound family man to a broken mourner and finally, an avenger turned soldier.

Dorison’s opening chapter of Conspiracies is strong and deserves a look from the Assassin’s Creed loyalists and comic book fans simply in search of a good read.