Of all the main Disney characters, Donald Duck is easily my favorite. Winnie the Pooh runs a close second, but the duck with the temper has always been at the top of my list. One of the reasons I love him so much is that he is a bit of an outlier in Disney’s stable of characters. Of them all, Donald is easily the most relatable as he displays consistent levels of anger, selfishness, frustration, as well as love and affection for his family. I also think it’s a blessing that he’s so hard to understand because with all of his incoherent ramblings, I’m fairly certain he has a foul mouth. He’s the most “human” of all the Disney characters and he does it all without wearing any pants. 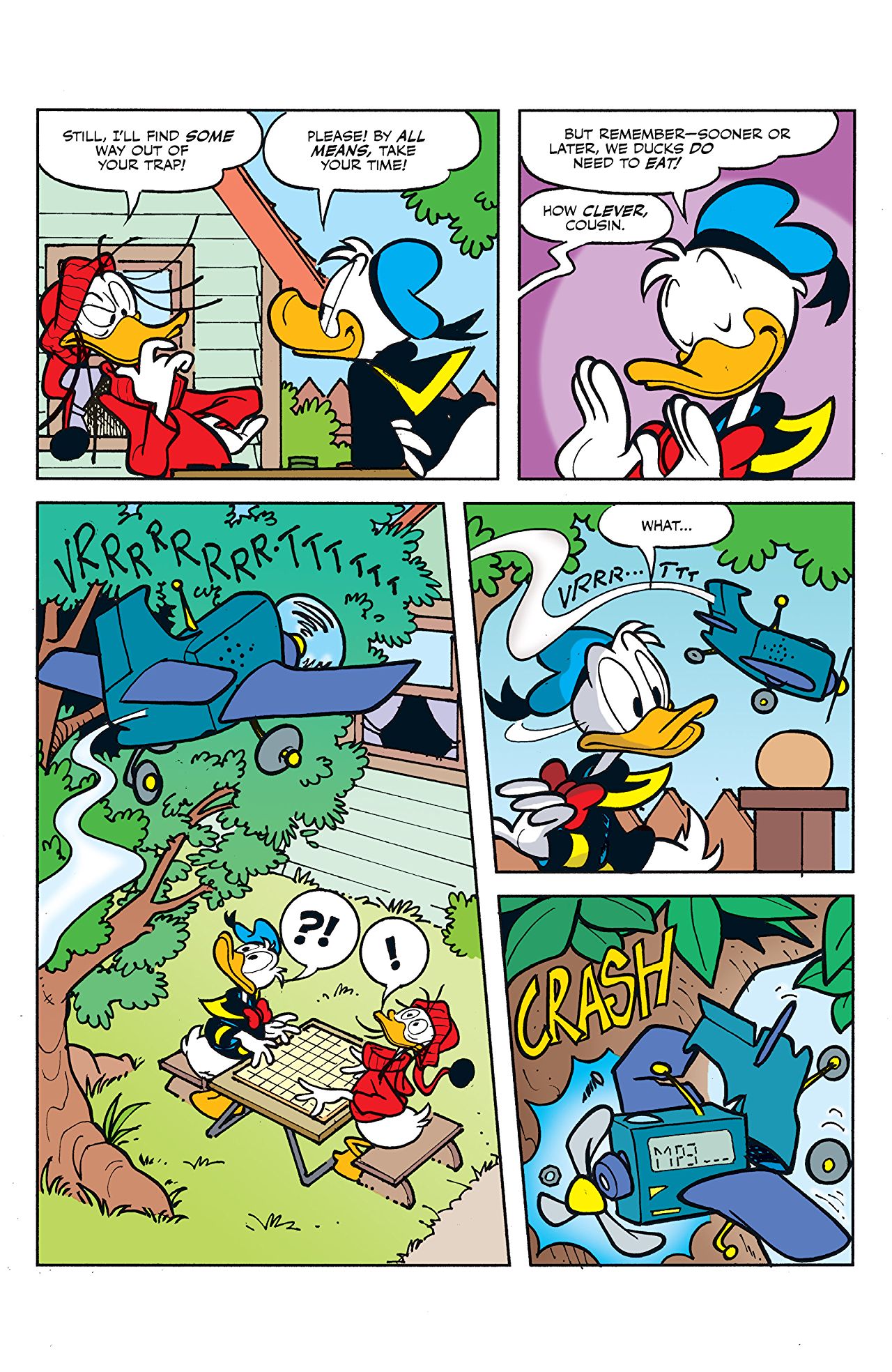 The things that draws me to Donald Duck are the reasons that Walt Disney Showcase #5 seemed like such a letdown. Donald Duck is the main character (or at least he’s supposed to be), but he is completely out of character. He doesn’t talk like Donald, he doesn’t act like Donald, and he doesn’t respond like Donald. In fact, if he had been switched with the art assets of any other Disney character, I would not have noticed even in the slightest. I had the same issues with Walt Disney Showcase #4 and their characterization of Goofy. IDW’s Walt Disney Showcase series is a collection of Italian comics that are brought stateside and collected for the first time in English. I wonder if, perhaps, the writers of the original comics just do not have a decent grasp on the intricacies of these characters, or that something is simply getting lost in the translation. Either way, something seems to be missing.

The premise for the story itself is actually decent and I was hopeful that it it could have been ripe for some classic Disney antics. My hope were high, but unfortunately, the whimsical Disney spirit is largely present in theory only. Donald and his cousin, Fethry, are sent by Scrooge McDuck to a city north of Duckburg to investigate a clothing counterfeiting racket that is losing Scrooge money due to his ownership of all the name brand companies. Their discovery of the knock-off brands offer some pretty humorous puns in the form of fake clothing line names such as ‘New Army’, ‘Canardstrom’, and ‘Duckingdales.’ One thing leads to another and Donald and Fethry find themselves on the run from counterfeiters. That’s most of the story and besides a surprise ending and a funny cameo from Scrooge, the story, overall, just wasn’t as good as I thought it could have been. 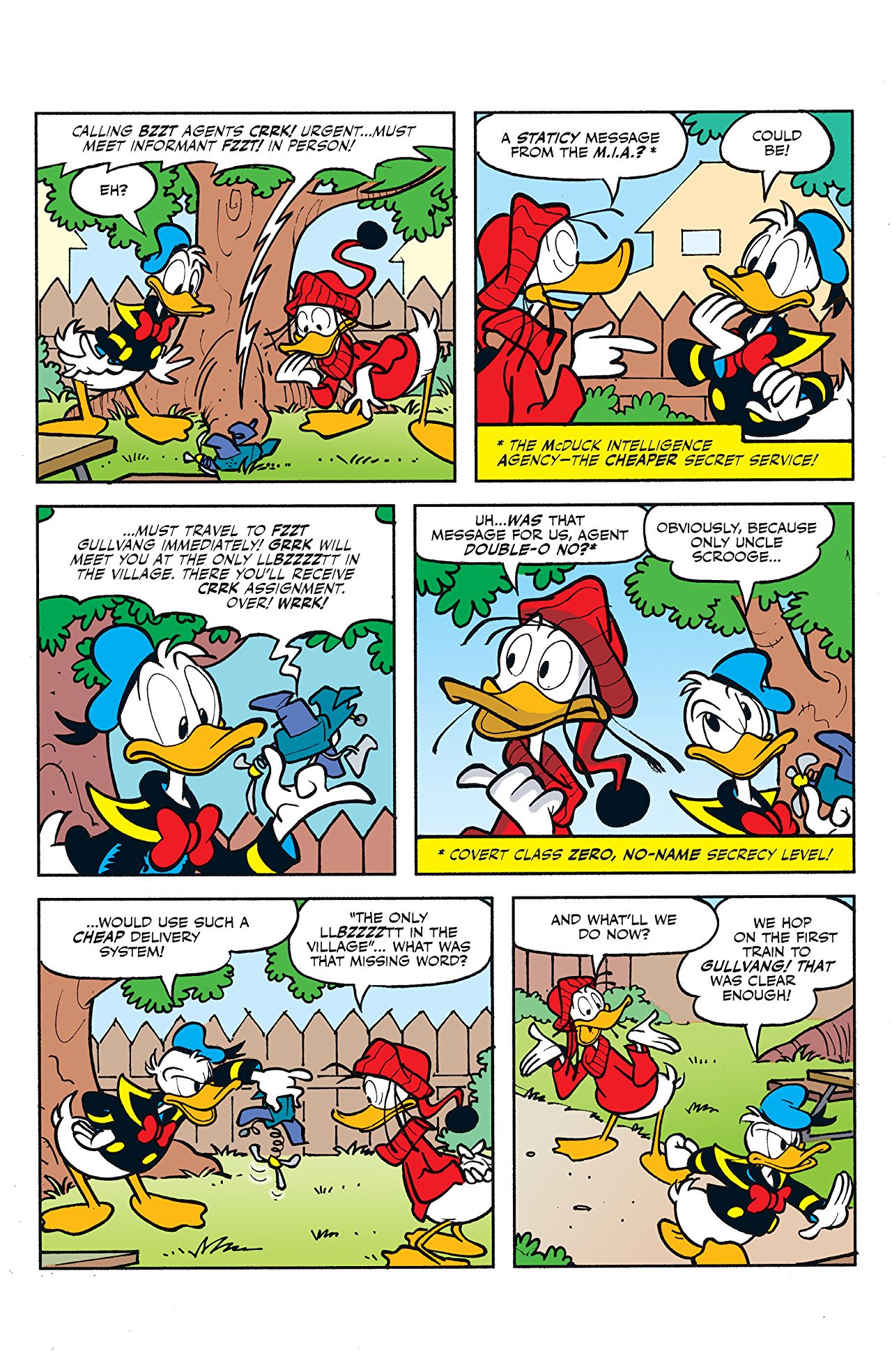 There are two extra stories at the end of the book, but they are both very short and inconsequential. The last one, however, stars Scrooge McDuck and although it’s an overall short story, it’s a lot of fun. It revolves around him being dragged on a shopping trip by his niece. Watching him lose his cool and temper at the frustration of being in a shopping mall is funny and it seems that Scrooge is the only character, thus far, that the writers have gotten right.

The artwork is pretty good across the board here. All three stories are written and illustrated by a different creative team, but it all looks decently uniform and it isn’t a stretch to believe that all the stories take place in the same universe. The characters look like they’re supposed to and the colors are bright and pop off the page. Aesthetically, Walt Disney Showcase #5 is above board.

As much as it bothers me, I am having a hard time becoming a fan of IDW’s Walt Disney Showcase series. I have a great love for these characters and the world they live in, but every issue I’ve read seems as if the creators are using the characters to tell a story, but any one character could be swapped with another without anyone really noticing. Besides Scrooge, characters are visually recognizable only. There are enough jokes and cameos to keep the issue from being a total wash, but Disney fans will be better served to look elsewhere for their comic book entertainment.