The road, for what many consider to be the best romantic pairing in all of X-Men, Rogue and Gambit, has been a tumultuous one. From their initial encounters in the Claremont/Lee era, into the fan-fiction drenched mid-90s, the word that best describes the relationship is passionate.

With the coming and going of various writers, all with their own outlook on the relationship, the couple moved into an on-again/off-again mode for what seemed like years. Well, it seemed that way, because that’s exactly what it was, years. After a long hiatus from each other, it didn’t appear as if they’d ever get over the angst, not without a dedicated series to address the many (and I mean, many) issues built into their relationship.

What were the chances of that happening? It seemed impossible. That is until Marvel greenlighted the [easyazon_link identifier=”1302911600″ locale=”US” tag=”boundingintocomics-20″]Rogue & Gambit[/easyazon_link]5-part mini to be written by self-proclaimed Rogue/Gambit super-fan, and writer of the acclaimed Hawkeye series, Kelly Thompson. She was just what the couple needed to get back on track. The pair had never been written full-time in this manner, and never by a woman, oddly enough. Under Kelly’s, admittedly nervous, pen, the mini-series accomplished exactly what it set out to do; reunite Marvel’s arguably most beloved couple and put them on the path that eventually led to becoming, [easyazon_link identifier=”B07CH291ZD” locale=”US” tag=”boundingintocomics-20″]Mr. And Mrs. X[/easyazon_link]. 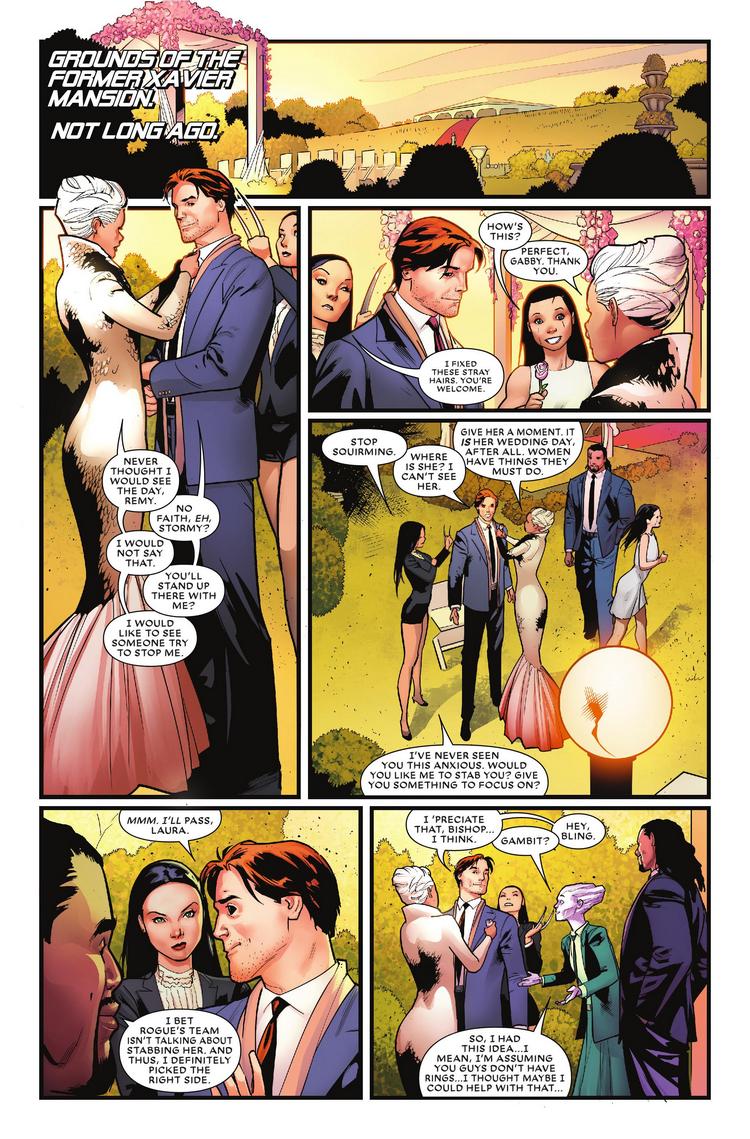 “So are you also going to steal Kitty and Peter’s honeymoon?”

Not since Chris Claremont’s X-Treme X-Men run in the early 2000’s had the two been in a better spot. For the most part, fans were content with the results. The super-powered couple received more development in five issues than they had in 15-years! Without having to say, when news of the twist in [easyazon_link identifier=”B07DWRBZ4G” locale=”US” tag=”boundingintocomics-20″]X-Men Gold #30[/easyazon_link] leaked onto the internet just days prior to its release, the internet set ablaze. We saw the two characters marry in place of the highly publicized Kitty and Colossus event. Then to really run up the score, Marvel announced that in just a few short weeks, the newlyweds would be starring in their own ongoing. It all seemed so surreal. But here we are. 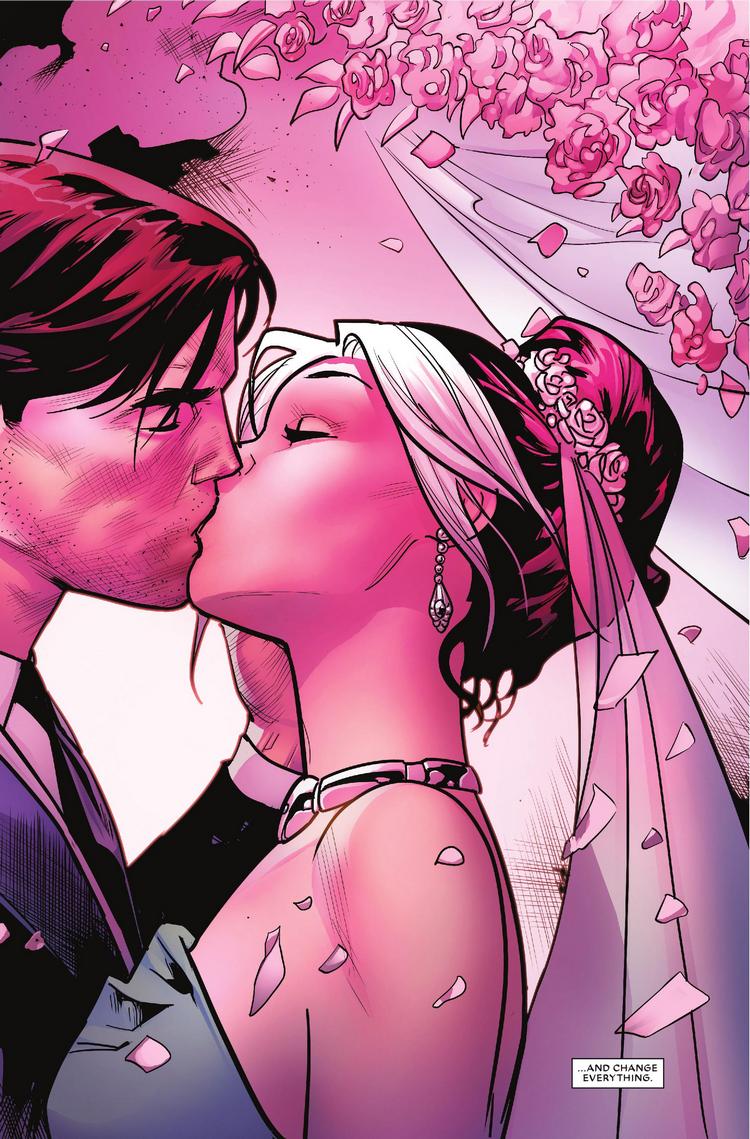 Outside of a couple minor nit-picks (we’ll delve into that a little later on), the book is really impressive. This review is going out a bit late, so I’m not too concerned about spoiling the book for anybody at this point.

Mr. And Mrs. X #1 doesn’t exactly pick up where X-Men Gold left off. Most of that book was dedicated to Kitty and Colossus, and rightfully so. Fortunately, MMX #1 fills in those precious missing moments. We come into the book with a collage of panels and a beautiful splash page depicting scenes from the present, and that which has yet to come, all masterfully done by the book’s artist, Oscar Bazaldua.

Picking up a little time after the proposal, we’re taken step-by-step through the minutes between then and the altar. An uncharacteristically flustered Gambit is being prepared by two of his closest friends in Laura (aka Wolverine, aka X-23), and Storm (she’s got a bunch of names too). We then drop in on Rogue as she and Magik, are busily searching for something in the mansion’s basement that will allow Rogue to both get her wedding kiss and enjoy the rest of the night’s festivities. There’s also some touching spots with an all-star cast of X-Women gathering up Rogue’s bridal accessories. Once her friends present her with old, new, and borrowed, we finally get something blue in the way of a wedding crashing Mystique, Rogue’s adopted-pseudo-psychopathic-mother. The two have a continuity-laden conversation before we’re caught up to the happenings of Gold.

“So… you’re not going to… I don’t know… kidnap me? Brainwash someone?”

The panels that follow are images I could have only imagined! Succeeding a single page of reception (don’t skip it, there’s some 25-year old plot-hole filling goodness to be had), Kelly and Oscar treat their audience to an eye-full, to say the least. In possibly the sexiest collection of panels in X-Men history, the newlyweds are post and dang-near, mid-coital as they hysterically enjoy their honeymoon aboard a loaned, Alpha Flight spaceship.

However, that proves to not be far enough away from the insane world of the X-Men as Kitty interrupts their post-wedding bliss with a mission of the utmost urgency (much to Gambit’s dismay). Mr. and Mrs. Lebeau (sounds nice, right?) being the only ones within range and in possession of a spaceship are tasked with rendezvousing with an old friend in possession of precious cargo. What they didn’t expect was to find that friend in the custody of the Shi’Ar Imperial Guard!

Following some action-packed pages and quippy dialogue, we find our heroine in a sticky, life and death situation before being mysteriously whisked away. Still in possession of the package, Rogue, is suddenly and unexpectedly in the presence of a not-so-old, would-be, suiter. Fin. 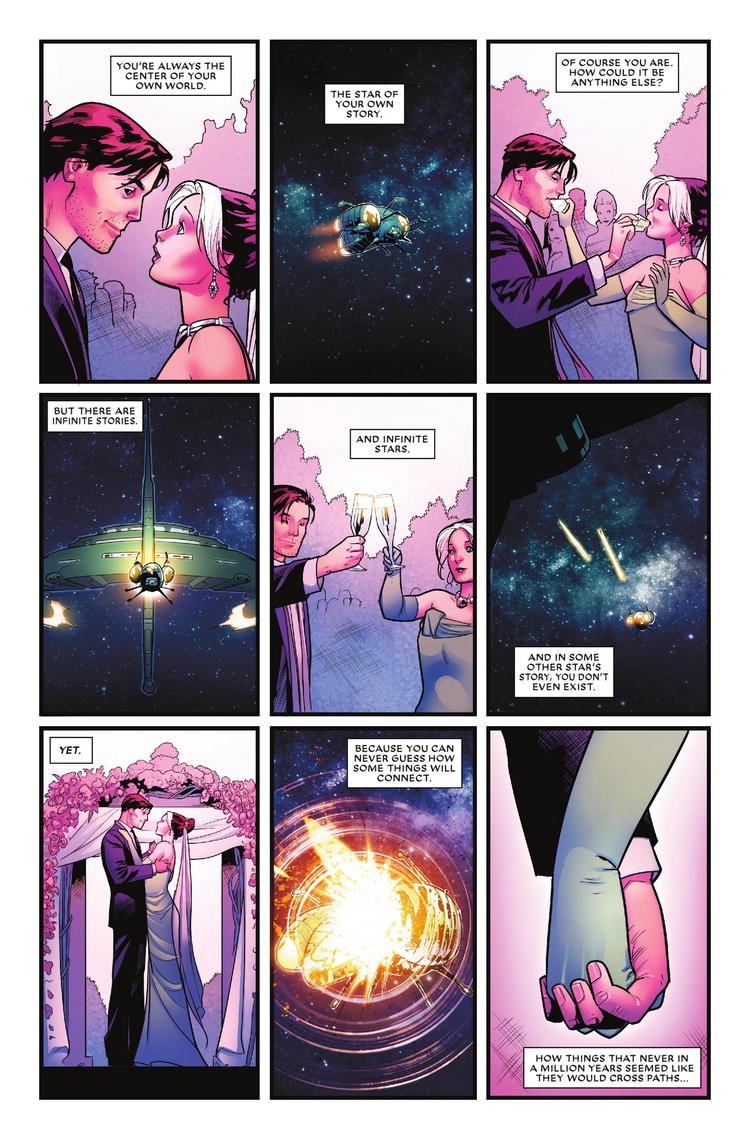 Let’s get down to what I liked and what I thought could have been better. Remember, I said this book didn’t have much to gripe about. Kelly Thompson’s most impressive skill is her ability to mold personality into her characters and navigate dialogue. The characters feel alive and respond to situations in the way you’d expect them. Her attention to continuity is refreshing and, in some cases, surprising as she brings up dangling plot points from books sometimes more than a decade old! In a post-continuity-lite Marvel Comics era where story trumps continuity, it’s an attribute I praise and appreciate.

However, it can also be her Achilles heel. While allowing the characters to revel in their history together and address both existing and potential plot holes, things can get a tad bit wordy. Not a problem for me, personally, but I can see how a wall of words can be daunting to others. Most of this occurred during Rogue’s conversation with Mystique (who happens to be the subject of my second nit-pick). Unless her reason for being present was a thinly veiled excuse that will be addressed later in this ongoing, I’m not sold on it. Seemed kind of out of place for who Mystique is.

As stated before, the art is handled by the talented Oscar Bazaldua and he does an excellent job, especially in those more tender moments where the couple has nothing but a sheet or two between them and getting this lovely book a hard M-rating. He pays a great deal of attention to proportions and anatomy, as any great artist should. His action scenes flow and pop off the page beautifully. There is no panel where I’m not 100% certain of what’s happening to my two favorite X-Men. There is one thing though. Some of the faces of his female subjects were a bit interchangeable and rounder than I would have liked, especially one or two panels that displayed both Rogue and Mystique together.

Outside of the couple aforementioned points, this was an awesome read, but after enjoying the R&G mini as much as I did, I didn’t expect anything less from Thompson. Oscar’s smooth lines only accentuate the overall experience. Their combined efforts have me looking forward to the next offering on pins and needles. This is a must-read for any X-Men, Gambit/Rogue fan or heck, anyone that loved the 90’s animated series.