Another issue down and another retro-tastic time with the Angels in Dynamite Comics’ new limited run series, Charlie’s Angels. After the surprising twist from issue #2, Jill, Kelly, and Sabrina are still uncertain about their ability to trust Charlie as well as questioning why they’re being sent in to hostile areas better suited for FBI agents or S.W.A.T. teams. The Angels are in over their heads and out of their element in this issue, but John Layman keeps things moving at a brisk pace and, thankfully, puts the emphasis squarely on the reader, above anything else, having fun!

After the surprising twists of issue #2, the Angels find themselves on the run somewhere in East Germany. Still uncertain about their ability to trust Charlie, the girls find themselves having to deal with things all on their own with little to no input from Charlie, Bosely, or anyone else. Watching the Angels handle everything by themselves is a real treat and it serves as a reminder that Jill, Kelly, and Sabrina are so much more than eye candy and are so much more than world-class butt-kickers. They are all three genuinely shrewd detectives. They’re in more over their heads than in any other time in this series (or the old TV series for that matter) and watching them handle everything and everyone that comes their way is a testament to the great characters that these ladies are. 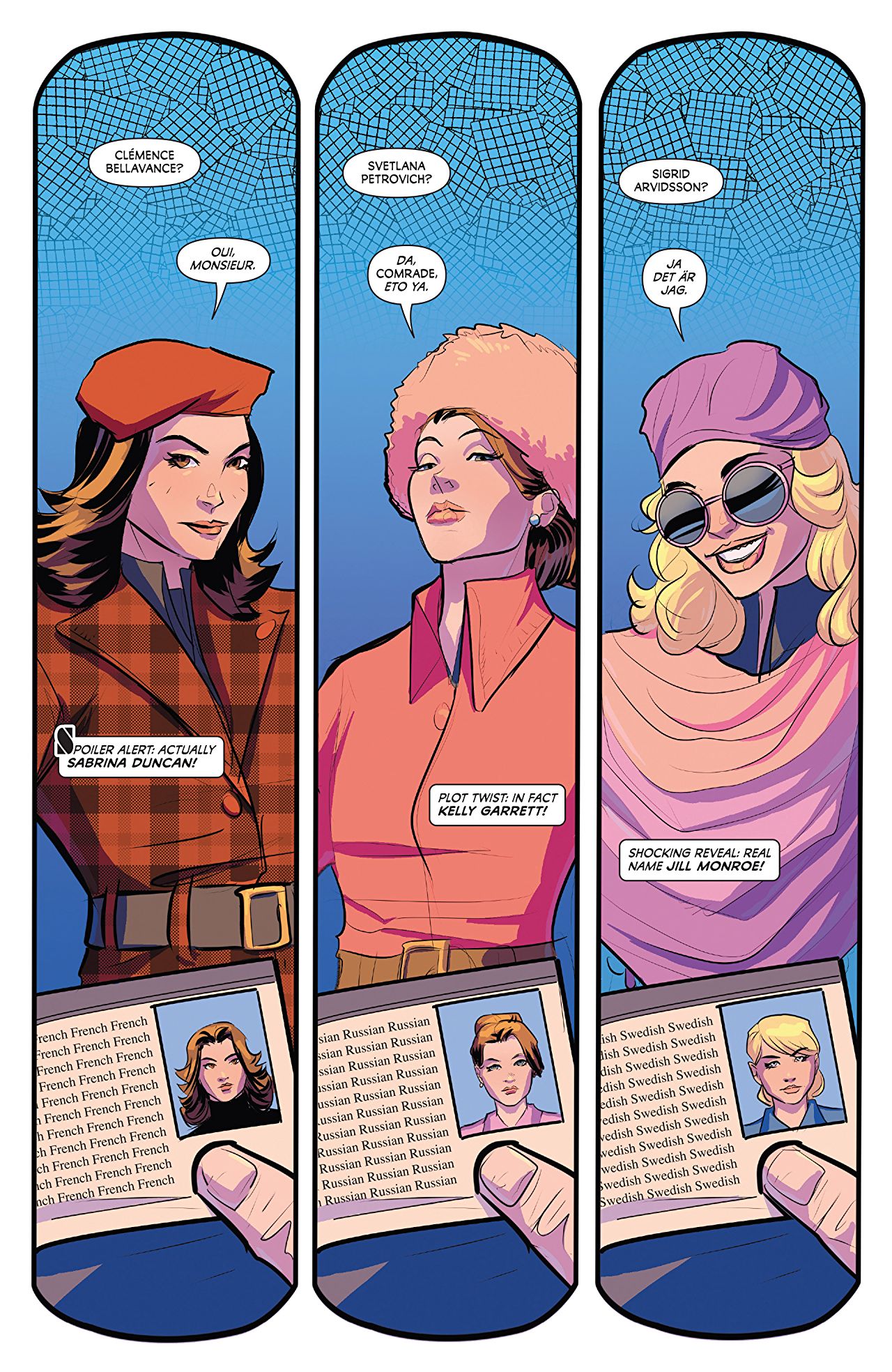 There is a whole lot going on in this issue. It could have easily been an overly-hectic mess, but writer John Layman does a fantastic job of keeping things moving at a brisk pace without allowing the issue to become rushed or over-stuffed. The Angels finally uncover the plot to assassinate the President (Jimmy Carter), we finally found out what happened to Kelly’s friend from the club, Charlie himself comes under great physical danger, there’s buildings blowing up and all sorts of other action beats are bouncing around from page to page, but the creative team handles it beautifully and [easyazon_link identifier=”B07DD6QQP7″ locale=”US” tag=”boundingintocomics-20″]Charlie’s Angels #3[/easyazon_link] winds up being the most exciting as well as the best issue of the three so far.

Everything is done in an appropriately over-the-top manner, as the Charlie’s Angels source material would dictate, but what I appreciate most about this creative team’s approach to this series is the enthusiastic sense of fun they have imbued it with. In a time when so many comics look to propagate certain agendas, viewpoints, or simply take themselves too seriously, Charlie’s Angels reminds us that comics are supposed to be, above all, pure escapist fun. It’s true to its cheesy 70’s roots and while the creative team obviously understands the inherent silliness of the original series, they pay great homage to it with tongue planted firmly in cheek, but without ever venturing into self-parody territory. They take the source material seriously, but have wonderful fun with it and as a result, so do we.

I’d also be remiss if I didn’t mention the wonderful sense of humor that runs throughout the entire series, not just issue #3. The dialogue is genuinely funny, but most hilarious is the “narrator.” The little word bubbles that frame the action and bring the reader up to speed is a definite high point in the book. You can practically hear those voice-overs from the 70’s TV series bringing you back from commercial breaks and it’s attention to details like this that make me love this series so much.

On top of all of that we get a fantastic reveal on the last few pages of what appears to be the major villains for the Angels for the rest of the series. They look to be the exact antithesis of Charlie’s Angels and I can’t wait to see how they are utilized going forward. The only problem with it is that I hope their reveal is not too late in coming. The Angels haven’t, thus far, directly faced a credible villain and while it’s exciting to see three appropriate foils for the Angels, this is only a five issue series and I hope we get enough time with them as we will want.

If you didn’t read the review and skipped right down to this part, let me reiterate my previous statements with this: I love this new Charlie’s Angels series and issue #3 is the best one yet! If you love cheesy, 70’s action shows, or if you’ve never watched anything that was made before the 2000’s, you should find something to enjoy here. [easyazon_link identifier=”B07DD6QQP7″ locale=”US” tag=”boundingintocomics-20″]Charlie’s Angels #3[/easyazon_link] deepens the plot considerably and introduces us to a trio of bad girls who will undoubtedly bring us some great action moving forward! John Layman’s writing is fun and funny and Joe Eisma’s artwork is groovy and captures the swinging retro feel. There’s really just not much not to like!