Rob Guillory is back with [easyazon_link identifier=”B07FP11YFZ” locale=”US” tag=”boundingintocomics-20″]Farmhand #2[/easyazon_link], the comic book series from Image Comics that proposes the theory that we could supply amputees with their missing body parts, simply by growing them on plants and trees. It seems like a setup for a cheesy B-movie that plays on a late night cable access program hosted by Joe Bob Briggs. That would have been perfectly fine with me (I love Joe Bob Briggs!) but Rob Guillory has eschewed many of the typical sci-fi, B-film tropes and constructed a well thought out story that takes cues from several genres such as family drama, horror, sci-fi, and comedy. Issue #2 has all these elements on display in great supply and makes for a fantastic sophomore effort in this new series.

The main thrust of the story of Farmhand seems not to be the horrific, sci-fi elements (although they are prevalent throughout), but rather the strained relationship that Ezekiel has with his family, specifically his estranged father. Having moved his family back to his hometown, he’s forced to deal with those relationships, as well as deal with his own family’s trouble in adjusting to their new surroundings. On top of all of that, we also get some insight into the troubled past that Jedidiah Jenkins has had and it lays some groundwork for some intriguing mystery moving forward. 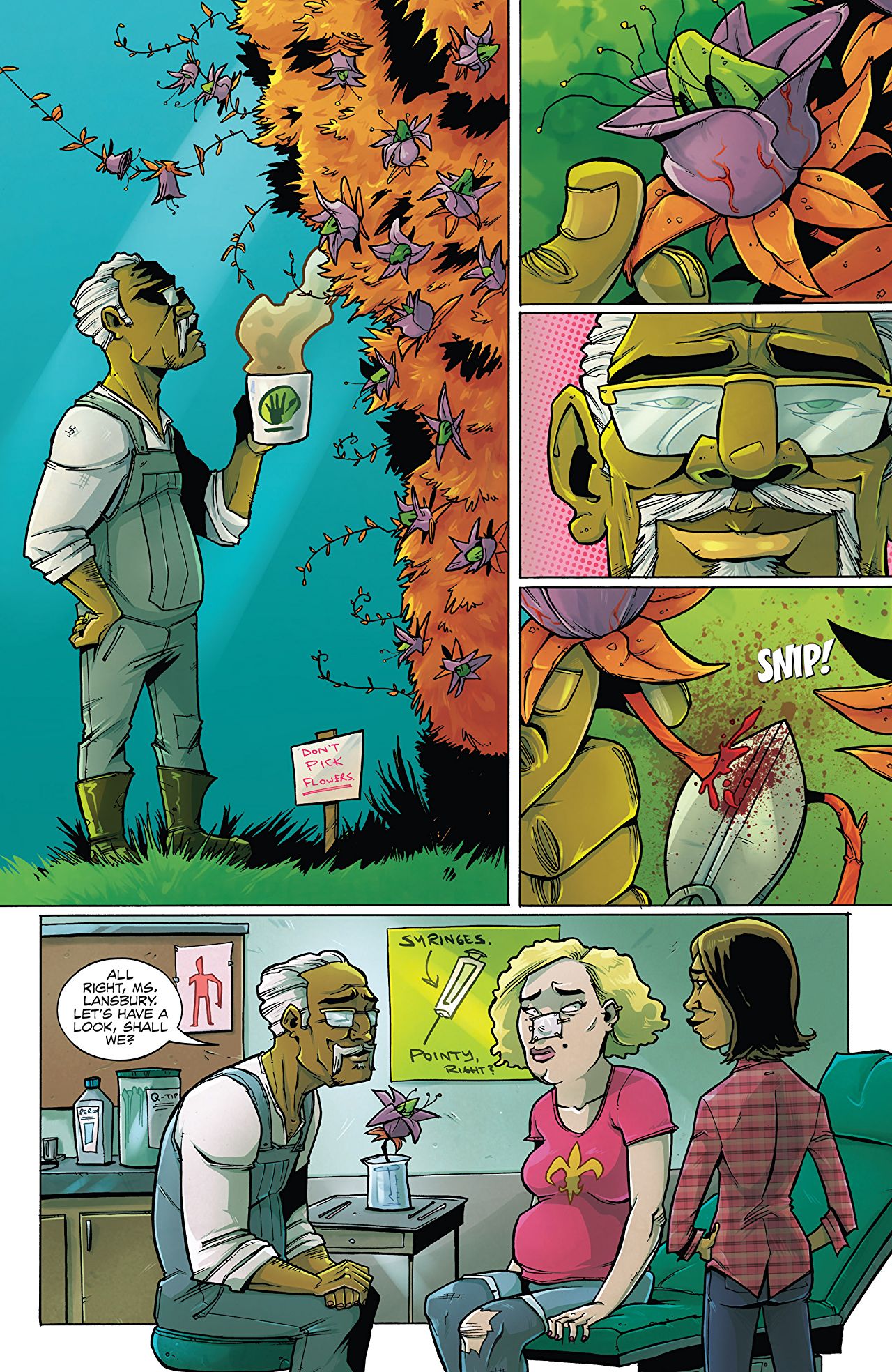 Jedidiah continues to evolve into a complex character. His son, Ezekiel, obviously has plenty of reasons for distrusting him, but he seems as if he genuinely desires to help people. The book is filled with plenty of clues that may point to Jedidiah not being a completely altruistic character, but he’s written nuanced enough that one can’t be too sure. There also seems to be some shady goings-on with the rest of the townspeople themselves. It presents an intriguing scenario in which we don’t know who to trust, and who not to.

It’s not just a big family drama, however; this is still a sci-fi horror comic at its core and it doesn’t skimp on those elements. Whether overt and in-you-face, or subtle and nuanced, Farmhand has no lack of horrific imagery and over-the-top elements. Much of it is played for laughs, but the final pages point to a much darker turn for the amputees who have been “rescued” by Jedidiah’s plants. (Amputations…. plants….Plant-utations? Is that a word? Well, it is now!) There’s also some other smaller scale, creepy moments that are just as effective. Rob Guillory has a keen eye for effective creepiness and it’s implemented extremely well in Farmhand #2. 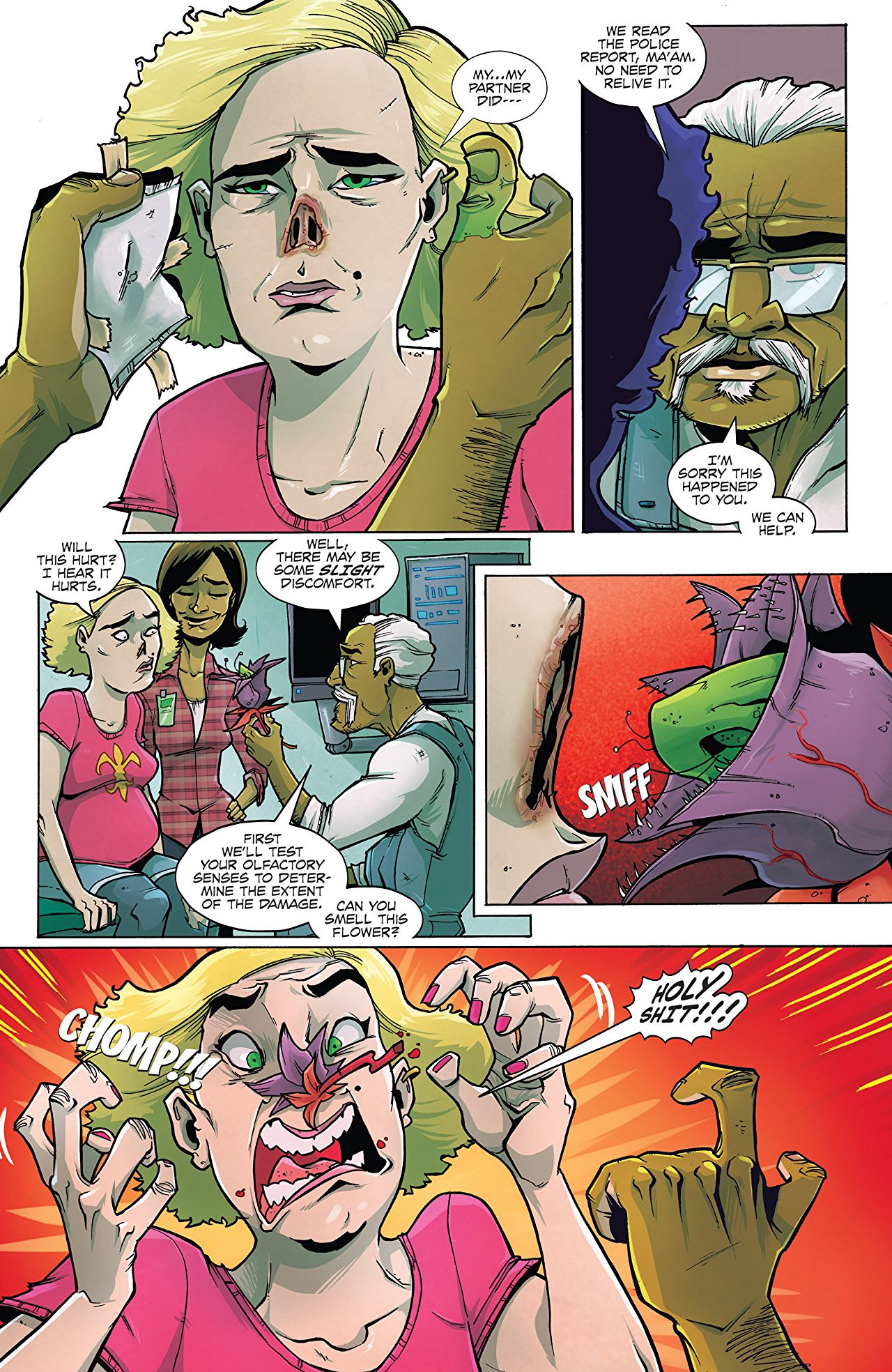 On top of all of that, this issue, like the first, is also extremely funny. I mean really, REALLY funny. Much of it comes from the dialogue and interactions between the characters, but quite a few laughs come from subtle sight gags that are sometimes off in the background and easy to miss. As much as a grip that Guillory has on horror, he has just a tight grasp on comedy. It’s a welcome addition to a story that could easily be lost in its own darkness. Ezekiel’s children, specifically his son, offer several moments of levity. Reading this comic while lying next to my sleeping wife necessitated that I stifle many laughs.

The artwork in Farmhand also continues to impress. Writer Rob Guillroy handles the artwork too and it fits the tone of the story perfectly. It’s highly stylized and intentionally imprecise, but it captures both the outlandish silliness of the premise, as well as the horrific sci-fi elements in just the right way.

Farmhand continues to impress me with issue#2. It’s a story that manages to balance several different genres without every feeling bloated. The characters are multi-layered and interesting and the new wrinkles in the story lay the groundwork for the deepening mystery that will most likely carry the story forward. It’s a surprising thing that one comic can manage to be so many things and execute them all so well, but Farmhand defies expectations by being a near perfect amalgamation of horror, sci-fi, drama, mystery, and comedy. Easily one of the best new books of the year!