Beyonders is the new comic series from Aftershock Comics and it comes to us courtesy of writer Paul Jenkins and artist/colorist Wesley St. Claire. Right off the bat, it should be known that there is a WHOLE LOT of stuff going on in this issue. It’s a bit of sensory overload going through it. That being said, all of the elements actually come together in a satisfactory way and plant the seeds of one of the most over-the-top and potentially fun new action mystery titles available today.

From the very first page of Beyonders, the reader is fed several scenarios from history that have some mysterious elements to them, but appear to be disparate events. As the narration continues, we see that all these events are related one to another. It’s highly interesting stuff and the Gravity Falls fan in me loves the cryptic clues used to put the pieces together. What is soon revealed, is that the narration comes to us courtesy of a young man named Jacob Tate who has taken it upon himself to put the pieces together and solve this particular mystery. 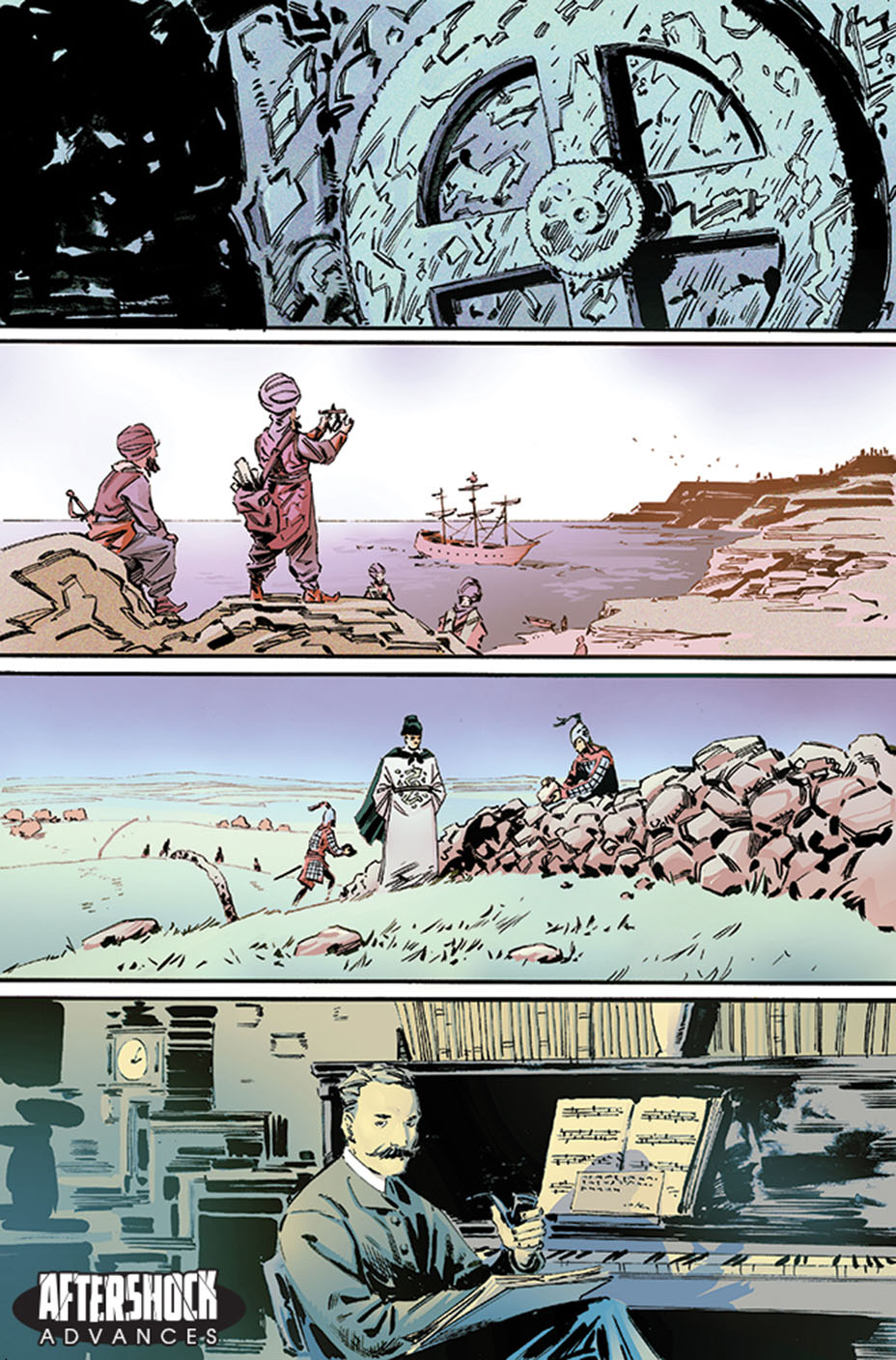 Jacob is instantly a great protagonist (well, for me anyway). As a huge X-Files fan I am immediately drawn to characters who pore over mysterious clues, adorn their walls with posters, thumbtacks, string, blurry cryptic photos, etc. Heck, Jacob even has an ‘I Want To Believe’ X-Files poster on his wall! The comic could have ended there, and I still probably would have loved it; that’s the level of my fandom, but thankfully, this onion has many layers!

Jacob lives with his aunt and his corned beef sandwich-loving uncle for reasons that are never expounded upon. He struggles at school due in part to his obsession with cryptography and the world of the unknown. He spends his spare time trying to meet girls online and hanging out with his pet Shadwell who is a Welsh Corgi with an eye patch. That’s right, an eye patch! Jacob’s interesting, but ultimately aimless, life comes to an explosive head near the end of the book where things get over the top in some of the best ways possible. There’s some fun revelations displayed by book’s end and it’s made clear to the readers that Jacob’s world is about to get MUCH bigger and entertaining. 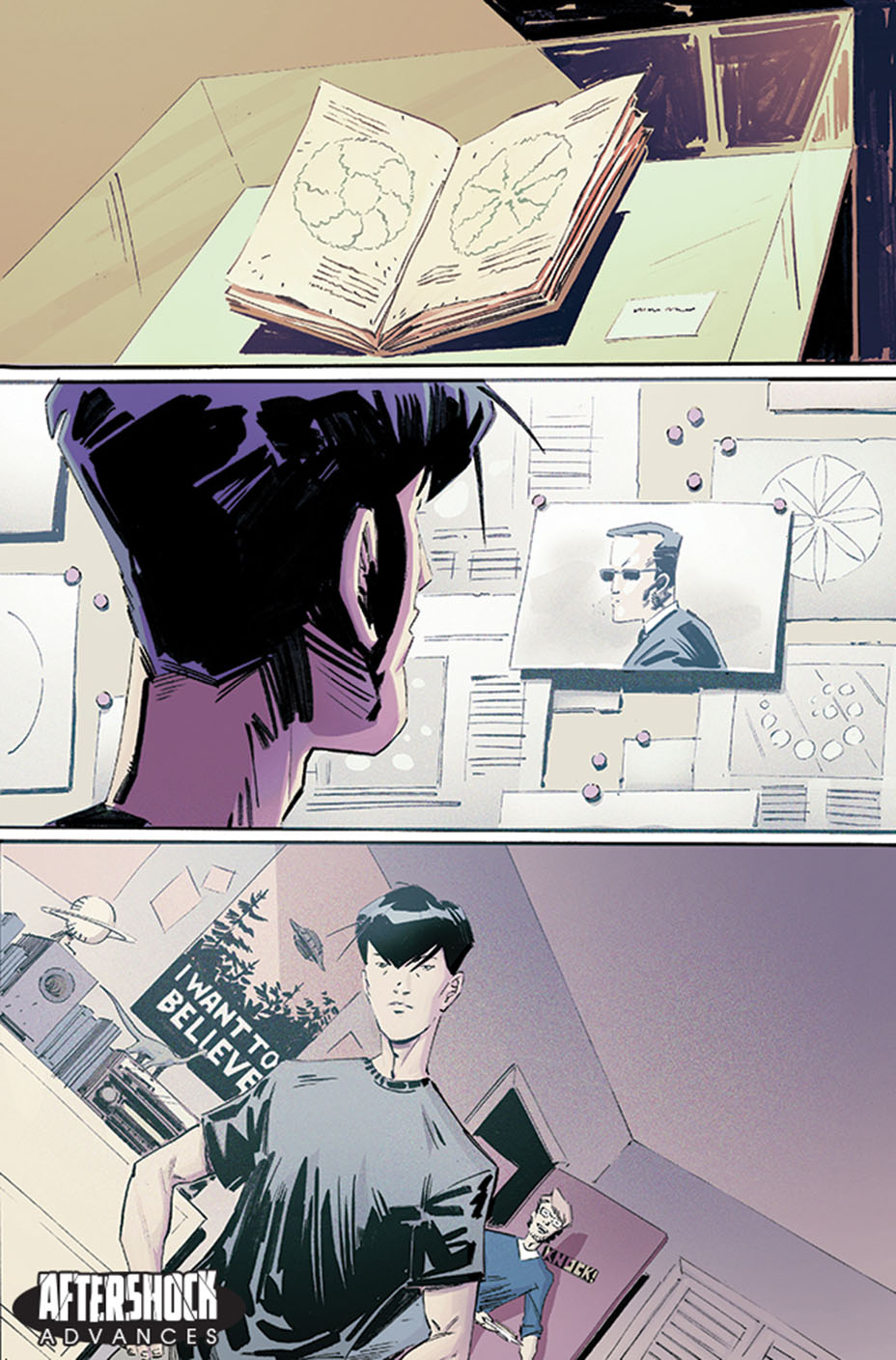 Writer Paul Jenkins has done an exemplary job of creating an interesting world in Beyonders #1 with some fun characters, exciting twists, and a healthy dose of humor. It could have been very easy for the story to go off the rails or feel overly-stuffed, but all of the  events come together by the end of the first issue. There are some aspects that I wish were better explained or more expounded on, but that can be taken care of in future issues. He’s even included various symbols on every panel that the reader can record and once put together, will reveal clues that readers can use to win some prizes. Sweet, huh?

I also enjoyed the artwork by Wesley St. Claire. It may not be to everyone’s taste as it is very stylized, but for this story, it fits perfectly. There’s plenty of shadows present to highlight the mysterious tone and the character’s faces do a great job of emoting. It’s a bit of a loose, almost sketch book style, but it’s perfect for the book.

Beyonders #1 is one heck of an introduction to what promises to be a fun and exciting mystery adventure. Equal parts X-Files, Gravity Falls and any number of action movies, Beyonders wears its inspirations squarely on its sleeve while also blazing its own trail. There was a lot going on in this first issue and some extra explanation would have cleared a few things up, but I don’t know how much more fun I could have had with this introductory issue. Aftershock Comics has something very fun and very exciting on their hands, so you should make sure to put it in yours.