Twitter is thankfully not the final frontier. But it is a place where a joke can land you in some hot water. This is what happened to the Twitter account for the much-anticipated Cyberpunk 2077. Yesterday it sent this now deleted reply out to a fan:

As we see, user @Rysteez asks to see “more guys,” and in turn, Cyberpunk 2077 threw out a joke instead. As you’d expect, it didn’t take long before the social justice mob descended upon this lighthearted joke. Which of course offends those who are overly sensitive about their identity politics.

With some going as far as to call it transphobic: 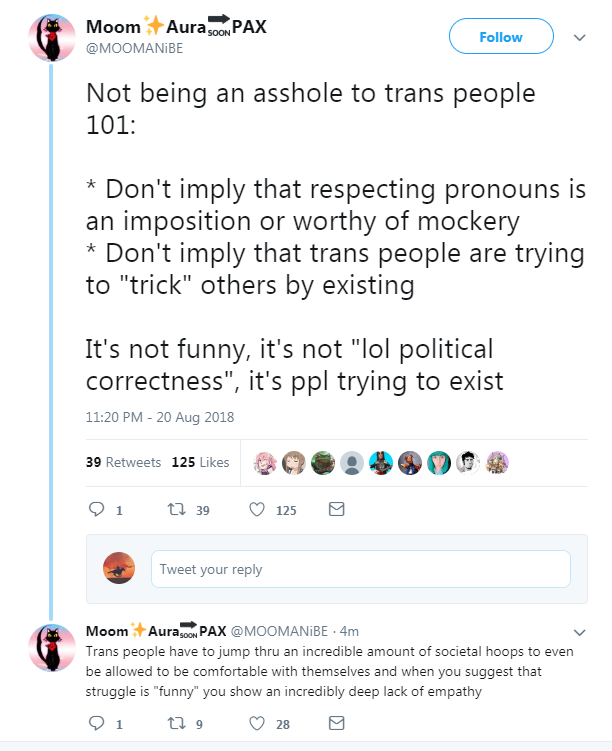 While other users claimed that the joke was “edgy white boy:”

Can’t wait for a game about cyberpunk that has the sense of humour of a edgy 12 year old white boy pic.twitter.com/ZlTrRB3Fzi

Transphobia is the least cyberpunk thing ever

Great job getting in the spirit of the cyberpunk genre by *checks notes* mocking people who express bodily autonomy?

Some Twitter users went so far as to state that they would no longer go purchase the game solely based off a now deleted joke.

So why all of this fire? Well, for some within the SJW community, they view the joke as a phrase used to mock those who are transgendered. Others see it as a light-hearted joke reflective of our current political climate, which sees a faction of people demanding whole populations walk on eggshells and follow their approved speech codes.

Because of this backlash of course, Cyberpunk 2077 Twitter account both deleted the reply as well as issued a quick tweet apology in an attempt to clear up the air:

Sorry to all those offended by one of the responses sent out from our account earlier. Harming anyone was never our intention.

This comes off a bit of controversy a few months ago when some people took issue that there were no non-binary gender options in the Alpha of the game. Which leaves the questioned, how would something like that look like?

Cyberpunk 2077 has long been in development, and right now the team as – you can see in their official Twitter account – are busy in this year’s Gamescom. Many players, like myself, and excited to be fed any new information pertaining to the title, which is expected to be released between 2019 and 2020 on PC, X-Box One, and PS4. Instead, we have to settle for another social justice mob hit.