Image Comics’ Coyotes #5, from writer/artist team Sean Lewis and Caitlin Yarsky, does a number of important things. It wraps up some lingering questions from the first story arc and takes several steps towards establishing a new one. It also represents a distinct shift in tone, and introduces us to a number of new characters while fleshing out some of the familiar ones. It seems like a tall order for one issue of a comic series, but Sean Lewis and Caitlin Yarsky handle it all with impressive aplomb and provide us with the single most enjoyable issue of the series yet!

Issues #1-4 introduced us to the world of Coyotes and showcased a turbulent and violent world steeped in vengeance, blood, and mythology. Issue #5 picks up the pieces of the explosive events and does an admirable job of quickly tying up some loose ends that were left dangling at the end of issue #4. The new story arc also brings with it a significant shift in tone. Fans who enjoyed the violent, visceral action of the first few issues need not worry; it’s still lurking about, but there’s an unmistakable optimism that seems to be creeping into the world of Coyotes and its characters.

We’re finally introduced to some new faces and while they’ve suffered the same losses of Red and those with her, they have a much more forgiving outlook on life. Whether that translates to Red changing her vicious ways remains to be seen, but for now, it’s a pleasant turn of events that makes the book and everyone in it far more relatable. 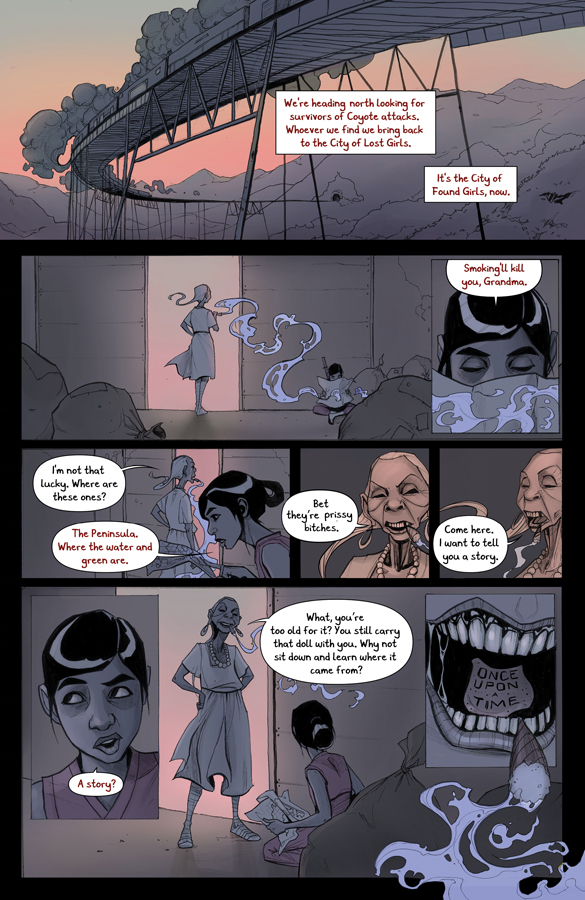 We also get an introduction to some interesting new characters, specifically a group of women who have been victimized by the same “coyotes” plaguing the rest. They’re a secluded group who live in the woods, but instead of operating out of vengeance, they offer a form of forgiveness to their attackers – and while still imprisoning them, allow them to live. Red is taken aback by this new way of handling abusers and it opens up the potential for some ideological conflict between various parties which could make for some good reading going forward.

Unfortunately, with the addition of some new characters, a few favorites from previous issues are MIA. The Duchess is absent, but more notably, Detective Coffee is nowhere to be seen. Coffee offered most of this story’s levity and he was sorely missed here. He was also the only adult male who has appeared in the story thus far who isn’t a complete and total tool. His inclusion in the story was one of the most compelling aspects and his absence is most definitely felt.

Issue #5 also ends with a bit of a promise of some cross-country traveling. Red and company are traveling by train (an enormous, over-exaggerated train) in an effort to find women and girls just like them and bring them back to the “safety” of their home town. This premise alone suggests some intriguing propositions as we will likely have the chance to continue to meet more people in different circumstances and their individual ways of dealing with their conflicts could continue to add layers to the story. Add to that the appearance of the other three ancient wolves, three more  groups of mystic grandmothers, and a greater insight into the mystic qualities of the story, the future of Coyotes looks to be intriguing and compelling. 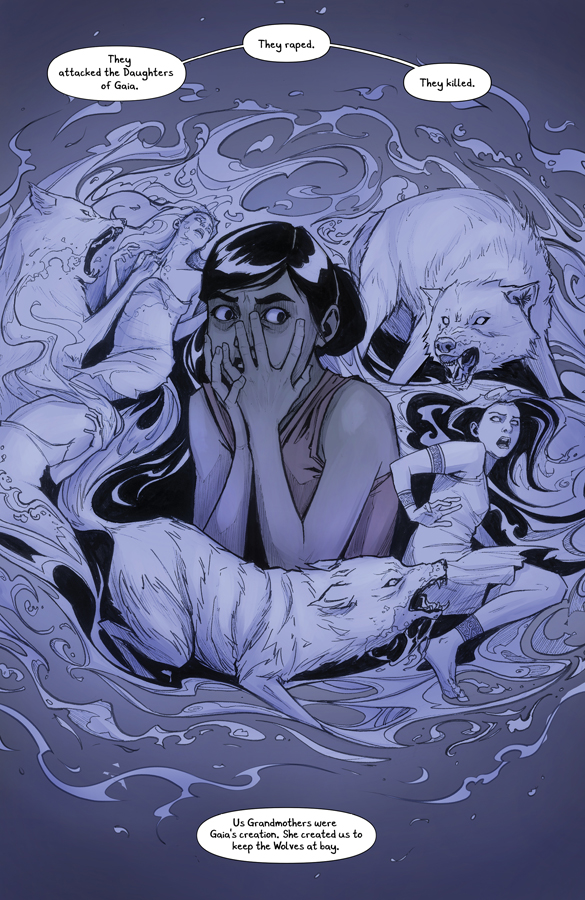 Not to be outdone by the stellar writing, artist Caitlin Yarsky continues to impress with her best work yet! The artwork in the first four issues of Coyotes was always dynamic and beautiful with a sweeping, almost dreamlike quality to it. Here though, Yarsky has upped her game with the same whimsical influences that has made Coyotes so aesthetically pleasing, but with a greater emphasis on detail that makes Coyotes #5 stand as the best looking issue yet!

With more insight into the mystic folklore of the series, as well as some of the cynicism giving way to optimism, Coyotes #5 is my favorite issue of this series thus far. While I miss a few of the characters from the first four issues, I enjoyed seeing some new faces and beginning what looks like what will be a fun trip around the country on an awesome (albeit wonderfully unrealistic) train. Although the violent vengeance is still presence, there’s a palatable theme of forgiveness that is woven throughout this issue and I can’t wait to see how this new take on the universe evolves the story telling process.