Issue #2 of Image Comics’ The Weather Man gave us plenty of insight into the backstory of the universe and specifically, Nathan’s supposed involvement in it. While I appreciated the world building taking place, I found the emphasis on the terrible things that happened, as well as some heart-breaking visuals and revelations, provided us with a far more cynical issue, as opposed to the hilarious, but still serious, tone of issue #1. Thankfully, issue #3 of Jody LeHeup’s futuristic action mystery story winds up balancing the two tones admirably. While it still puts an emphasis on the tragic tone of the second issue, it brings back a lot of the levity and light-hearted comedy that made issue #1 such a joy to read.

The ramifications of the shocking revelations of the last issue boil to the surface here and it results in a story that gets off to the races in terms of tone and doesn’t let up until the final page. This is an extremely action packed issue and it actually reminded me of those great (and some not so great) buddy/action movies of the 80’s. Nathan and Cross are now BOTH on the run and civilians, governments, and cyber-enhanced assassins are all gunning for them! Watching them outrun and outwit those coming for them is the real treat of this issue, as well as the banter between Nathan and Cross. Their relationship is growing, if somewhat awkwardly forced, and their relational dynamic is quickly becoming the heart of this series. 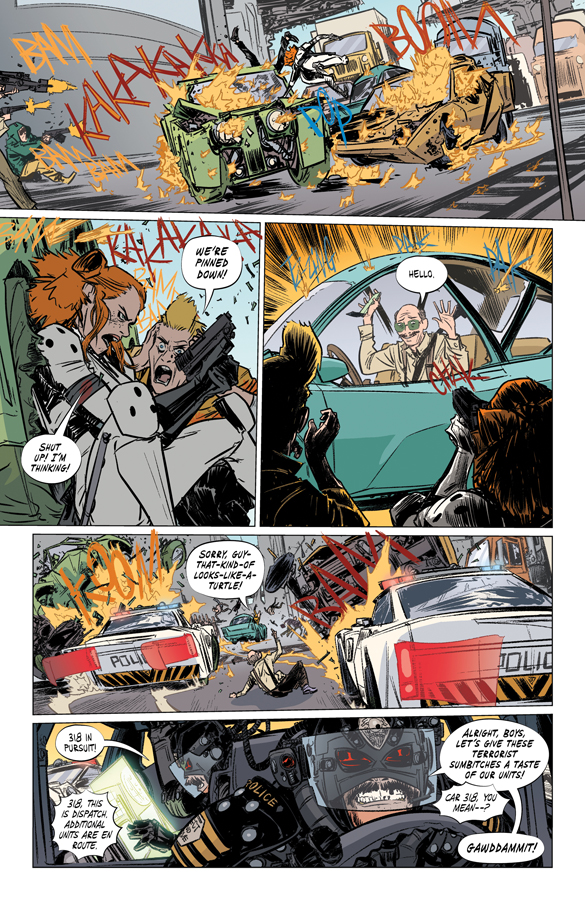 However, I do have to admit that the breakneck action-packed tone of [easyazon_link identifier=”B07FNZ3HJ7″ locale=”US” tag=”boundingintocomics-20″]The Weather Man #3[/easyazon_link] also results in what is probably my only real gripe with this issue and that is some of the visuals. It’s strange to even knock the art in this book because I absolutely love it and I think that Nathan Fox has created one of the most aesthetically pleasing books I’m currently reading. That being said, the art style causes many of the action scenes to become so stylistic that it’s often difficult to see what’s really going on. There’s so many explosions, bullets, car parts, debris, etc. that I had to stare for extended periods and even tilt the page to understand what was happening. It certainly adds to the chaotic nature of the scenes, but it also kind of hurt my eyes.

Besides that one small gripe though, I have nothing but praise for this issue. Apart from the fun, action packed tone, we also get an introduction to what looks to be the real villain of the piece. His introduction is early on in the issue and we don’t get much insight into what kind of role he’ll play going forward, but he is appropriately abhorrent while also being terribly fun. His motivations and place in the world remain a mystery, but I can’t wait to see more from him! 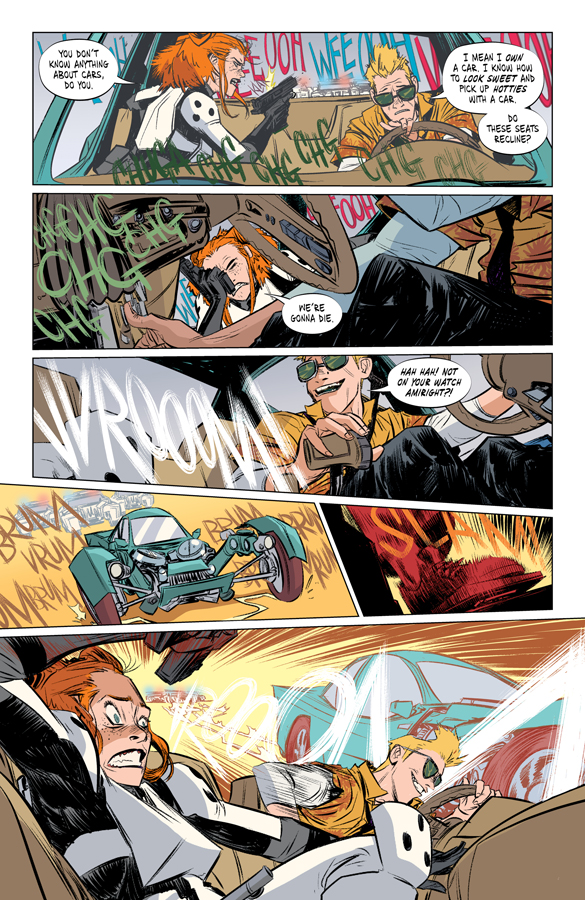 It should also be noted that writer Jody LeHeup continues to display his knack for showcasing nuanced moments of humanity against the backdrop of the absurd. He showed some of this with his excellent series, Shirtless Bear Fighter, but it’s amplified even more in The Weather Man. Touching on people’s emotions and creating characters who seems relatable and sympathetic is a difficult thing to do when they are written as over-the-top as Nathan and Cross are. Add to that the zany, sci-fi world they inhabit and it becomes a tall order to tug at reader’s heart strings and engross them in the tenderer side of the narrative. That’s what LeHeup does though and it’s on display in The Weather Man #3 better than ever before. It’s a rare talent and LeHeup does it better than anyone right now.

After a bit of a drop off in issue #2, The Weather Man comes roaring back with a fantastic third issue! With a welcome return to the hilarity and a fun series of action sequences, Nathan and Cross’ story is really beginning to shape itself into something we can all be excited about. Add in the beautiful (albeit occasionally confusing) art and a great interplay between our two leads, and it’s clear that the creative team is firing on all cylinders. Jody LeHuep has an uncanny knack in creating unbelievably zany universes and filling them with hilarity and heart break in equal measure. If that sounds good to you, then tune into The Weather Man.

See what I did there?