Since the beginning of the movement, ComicsGate and its supporters have been subject to numerous articles and posts from industry professionals which attempt to analyze and describe the movement but ultimately devolve into labeling the movement as one of bigotry and hatred.

In a recent article, entertainment and pop culture website Vulture participated in spreading the false narrative that ComicsGate is purely a movement of racists and bigots, another entry in a growing trend of popularizing the idea that a criticism movement is built on blind ignorance and hatred. While many mainstream news outlets continue to smear the movement with articles that paint a deceptively disingenuous picture of the movement, ignoring the reasoning behind ComicsGates’s existence and continued support, the demographic of its supporters, and the hypocritical behavior of opponents of the movement.

The regularly stated goals of ComicsGate have never been about hatred, but rather focus on quality. Though it is difficult to pin down the goals of any widespread internet movement due to the wide number of users each stating their own opinions, the goals listed on the aptly named ComicsGateWiki seem to best represent the more common and popularly cited goals of ComicsGate.

The key points ComicsGate is opposed to as seen on the Wiki (with independently linked examples) are as follows:

“1. The adoption of art styles influenced exclusively by Progressive politics, & by the awkward, stilted injection of said political messages into stories regardless of whether context demands it or not.

2. The hiring of people based purely on their surface traits and “oppressed demographic” status (Women, Minorities, LGBT) rather than hiring based on merit & affinity for craft.

3. The change or outright replacement of beloved classic characters in the interest of shallow appeasement, supposedly in the name of progress.

5. The rejection of honest criticism, swept aside as harassment or discrimination.”

None of these goals line-up with the mouth-frothing, white supremacist hate-mob image that numerous media sites have purported as the ‘true face’ of ComicsGate. The five goals are laid out simply and straight forward, with no mention of organizing hate or harassment, but with all the intent of returning quality writing, art, and stories to comic books. 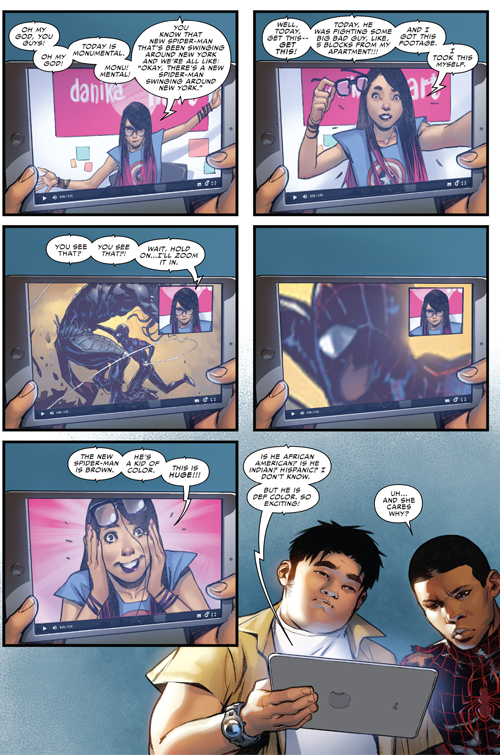 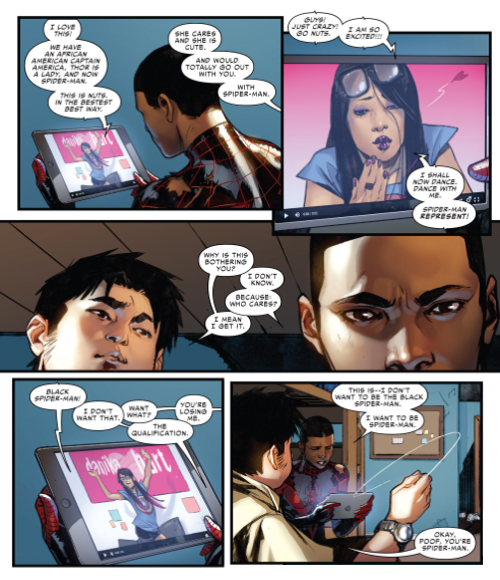 Miles Morales, one of the more accepted ‘diversity’ characters, (most likely due to his well-written and plausible origin) touches upon the discomfort felt by many when unnecessary focus and importance is placed on superficial characteristics. Miles expertly sums up some of the key arguments made by ComicsGate. Spider-Man Vol. 2, Issue 2. 2016, Marvel.

These complaints are routinely cited as reasons that the movement is built upon a fundamental hatred of minorities, LGBT+, or any number of surface traits. In reality, the ComicsGate movement is more diverse than the opponents of ComicsGate wish to acknowledge. The diversity of ComicsGate lies not on a superficial focus on gender and race, but in the diversity of thought and perspective of its supporters. In fact, as prominent ComicsGate creator Ethan Van Sciver points out, the leader of ComicsGate is “you”, the reader.

Even within this video, made by Ethan Van Sciver to unmask the leader of ComicsGate, there exists objective proof that the movement is diverse, despite what industry professionals would have their audience believe.

Unfortunately, opponents of ComicsGate have accepted the ‘white supremacist bigot’ angle as fact, going so far as to silence and ignore the very ‘diverse’ people they claim to fight for, simply because they support ComicsGate:

Brandi, I’m a mixed race POC. If they want people like me, out of comics, then why are they friendly with me, ever? That’s not how racists work. Those women aren’t associated with that tag. I’m not even associated with it! This is all madness. https://t.co/Uxit4lBbkg 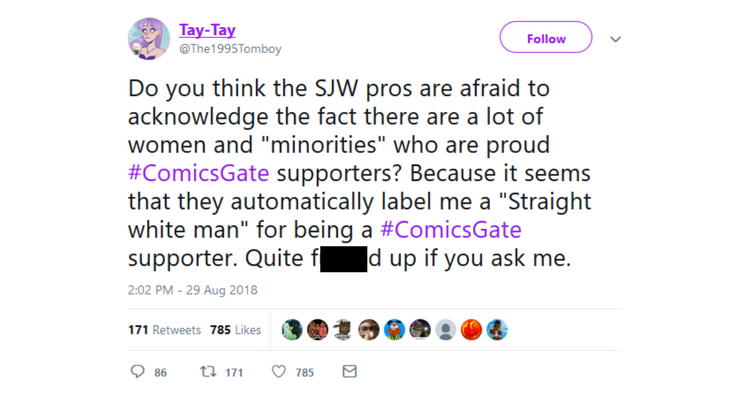 They tell me Im self-hating, or Im a Nazi when I tell them Im a bisexual Latino, I got blocked by a few marvel folks when I told them I dont like the portrayal of gay Iceman or America Chavez, I tell them Id prefer a Hulkling and Wiccan series but I’m blocked anyway. #comicsgate pic.twitter.com/rati2CyMRe

ComicsGate opponents routinely claim to be against harassment, boycotts, and threats, these same self-appointed moral arbiters hypocritically engage in these very behaviors and actions (all of which were decried by ComicsGate supporters):

Furthermore, the ComicsGate-supporting creators of Red Rooster, Mitch and Elizabeth Breitweiser, just announced that they will no longer be attending Lakes International Comics Festival over concerns for their safety.

“Due to concerns over our personal safety, @mbreitweiser and I have canceled our upcoming appearance at Lakes International Comic Art Festival. The show is going be awesome and we are sad to miss it. Be excellent to each other.

“I’m disappointed beyond belief that influencers are antagonizing fans and their associations. We welcome everyone and are happily creating a product to serve you with…and we are listening.

The threats of violence and harassment towards the Beitweisers were so severe, that even vocal ComicsGate opponent and Eternity Girl author Magdalene Visaggio posted a series of tweets on her Twitter account condemning their harassers and pleading for comic book discourse to remain non-violent. 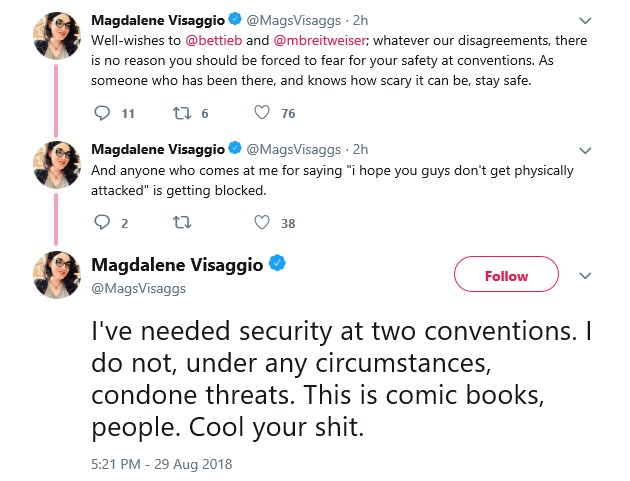 Though a staunch and vocal critic of the ComicsGate movement, Visaggio shows grace and integrity  by rightfully condemning violence against ComicsGate creators.

Conversely, when met with this info, prominent ComicsGate opponent and Vertigo artist Richard Pace did not condemn their harassment, but rather put forth the idea that the couple deserved it. 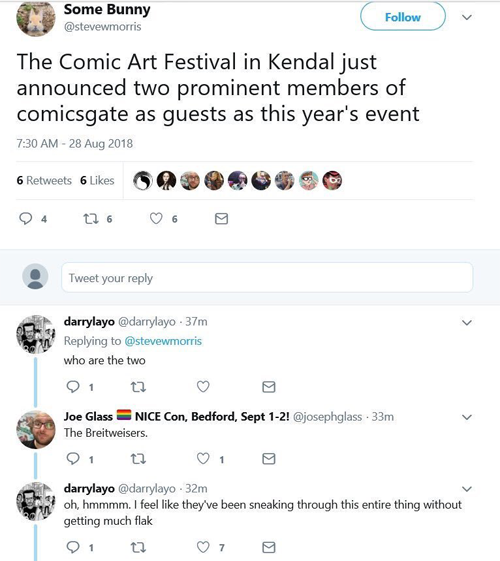 The first (of many) thinly veiled threats towards the Breitweisers due to their support of ComicsGate. The situation is very reminiscent of the premeditation that occurred before Jeremy Hambling’s assault at GenCon. 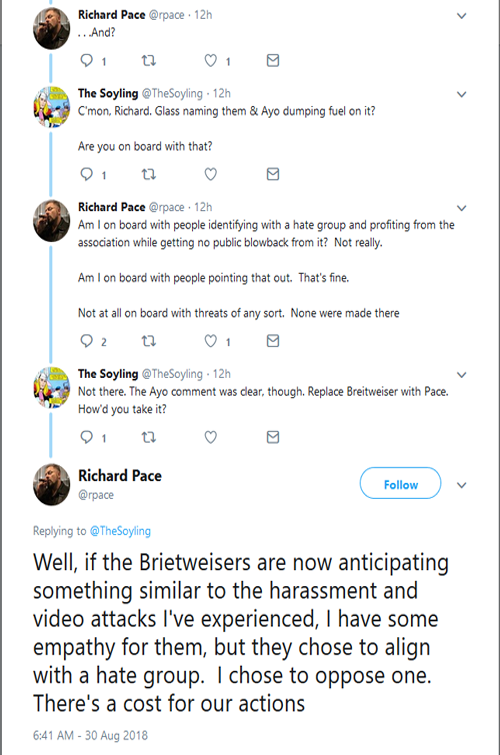 “A cost for our actions”, or in other words, “They deserved it.”

The very critics, authors, illustrators, and companies that claim to stand for inclusion and diversity are often the ones silencing opponents, erasing the identity and voices of diverse persons, advocating for harassment, and celebrating violence as a means to end discourse. Many ‘Anti-ComicsGate’ articles attribute numerous harassments, death threats, and bigotry-based behavior to ComicsGate, yet fail to mention that the opposition is engaging in the same behaviors they claim to be disgusted at. These articles rely on classic fear-mongering to garner support for a cause that is ultimately detrimental to the industry that means so much to comic book fans from all walks of life.

ComicsGate is not, and never has been, a movement built on ‘white supremacy’, ‘expelling minorities and LGBT from comics’, or ‘misogyny’, by any definition. The fans who support and rally behind the movement want only one thing: to see their favorite publishers, their favorite creators and their favorite characters, producing entertaining, fun, and quality work.

It is disingenuous to continually push a narrative without presenting readers with the evidence necessary to make their own informed opinions. Anti-ComicsGate are presented as victims while ComicsGate is presented as an ignorant hate mob. This popular comparison is false, as both sides have been shown to have their share of vicious trolls who seek nothing but to harass and inflict pain upon their opposition, but also reasonable, respectful individuals as well.

In order to move forward past this tumultuous moment in industry history, the ultimate goal of the comic book community should not be destruction or silencing of their respective opposition, but rather to engage in constructive and respectful dialogues, disavow all harassment and violence, and most importantly of all, produce excellent comic books.

[AUTHOR’S NOTE: If any verifiable evidence can be produced to refute any of the aforementioned citations or arguments, edits, retractions, and corrections will be produced as necessary to ensure this remains a factually correct article.]