The [easyazon_link identifier=”B07FNXF5MF” locale=”US” tag=”boundingintocomics-20″]Stellar series[/easyazon_link] from Image Comics and Skybound Entertainment takes a dramatic, and jarring, left turn in issue #3. The happenings from the first two issues take their toll on Stellar and those around her and this issue finds her picking up the pieces and soldiering on with life on an alien planet before her past finally catches up with her. It’s an interesting issue with some extremely cool visuals and creature design, but as much as I enjoyed it, I found it to be a little too haphazard for its own good.

Stellar finds herself alone for the first time and she has to deal with situations that her impressive power set cannot get her out of and it’s refreshing to see her in such a spot. The problem with this predicament is that writer Joseph Keatinge blazes through the entire development in a matter of one or two pages. We’re led to see that Stellar is on her own with only a weird jackalope alien for companionship. The creature grows to immense size and Stellar’s hair grows to an impressive length and so we are shown that there is a significant (years and years!) span of time that passes here and we don’t get to really witness any of it. We’re just shown that it happened. 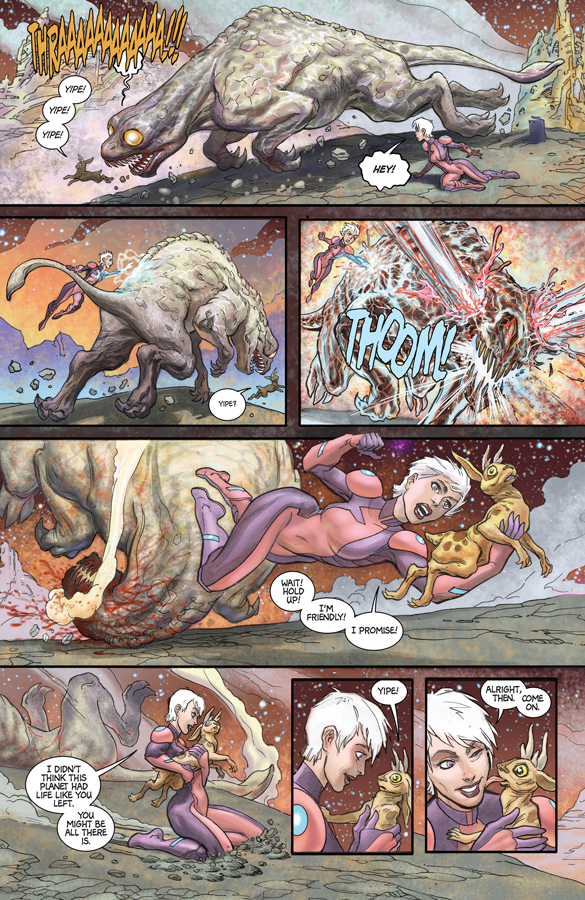 Another unfortunate aspect of blasting through this part of it is that this particular section of the story showcases some of the cooler art we get. The creature she hangs out with and her transformation from typical spandex wearing space lady into a wild, savage Barbarella style warrior are the most visually appealing aspects of this issue. However, it shoots by so fast that we get only fleeting glances of it and we’re left wondering what all her time on that planet must have been like.

Eventually, she is found and her captors represent another sticking point for me and that is that they have shown up a number of times and we still don’t have much of an idea of why we’re supposed to be invested in them. They pose no threat to Stellar at all (she handles the both of them easily) and their backstories have been non-existent. It’s fine that this is the path the creative team has chosen to go on as you can’t focus on every character too much, but we’ve seen a lot of these guys so far and I still don’t know what I’m supposed to think about them.

Those aspects aside, this current run of Stellar is still an intriguing story and I am invested in it more than I thought I would be. Stellar is a powerful (almost over-powered) individual and her desire to leave her sordid past behind is good story fodder. She also continues to be a multi-layered character who doesn’t fit into any particular mold. She resides refreshingly in the gray area on some occasions and while she is still heroic and worth looking up to, she’s also willing to turn the other direction when bad stuff is happening if it means she can finally get away from it all. Her characterization continues to carry the story forward when the other aspects fail to. 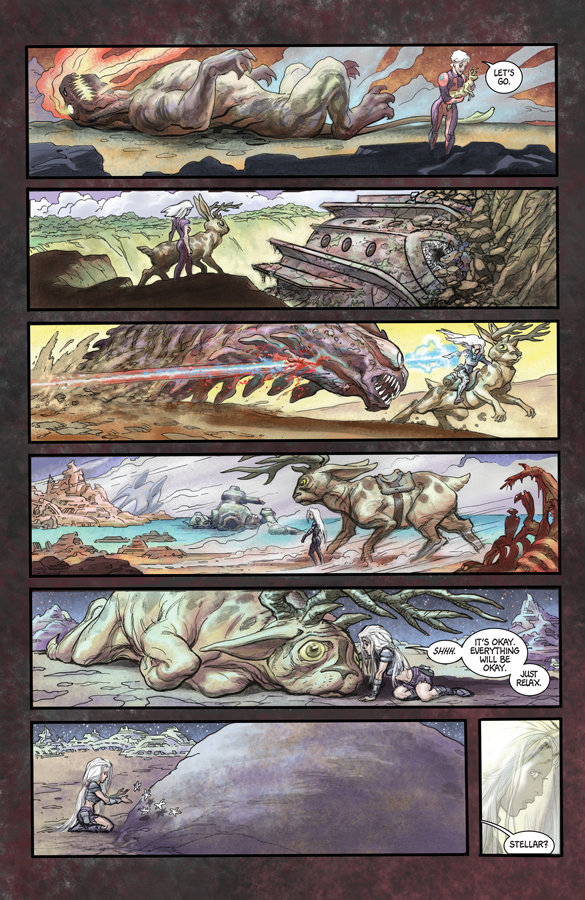 It’s also nice to get a better look at the villain, Zenith. He made a brief, but powerful appearance last issue and his malice is on full display here. He obviously has a long history with Stellar and even though we still have very little insight into it, Joseph Keatinge does a fantastic job of balancing Zenith and Stellar’s relationship in a way that excels beyond typical hero/villain interactions. Neither of them seem to hate the other and even though it’s clear that each would kill the other to meet their own ends, that’s not the path the story takes. It ultimately ends with the introduction of what looks like ANOTHER villain or group of villains and while I would like to get to know the characters we already know a little more, the cliffhanger and promise of a possible real match for Stellar is enough to entice.

While several of the different elements of [easyazon_link identifier=”B07FNXF5MF” locale=”US” tag=”boundingintocomics-20″]Stellar #3[/easyazon_link] don’t quite hit a home run with me, the total package is greater than the sum of its parts. Bret Blevins’ artwork continues to improve with every issue and I especially enjoyed some of the creature design here. Stellar herself is still a compelling heroine and her plight is captivating enough to bring readers back for more. We’re halfway through this story of hers and I hope that the next three issues slow down a little bit and allow us to savor this interesting space tale as much as it deserves to be.