Cartoonist Mark Knight put together a cartoon depicting Serena Williams acting like a child at the U.S. Open for Australia’s Herald Sun. In the cartoon you can see his depiction of Serena stomping on a tennis racket while a pacifier lies on the ground next to her. In the background, the chair umpire asks her opponent, Naomi Osaka, “Can you just let her win?” 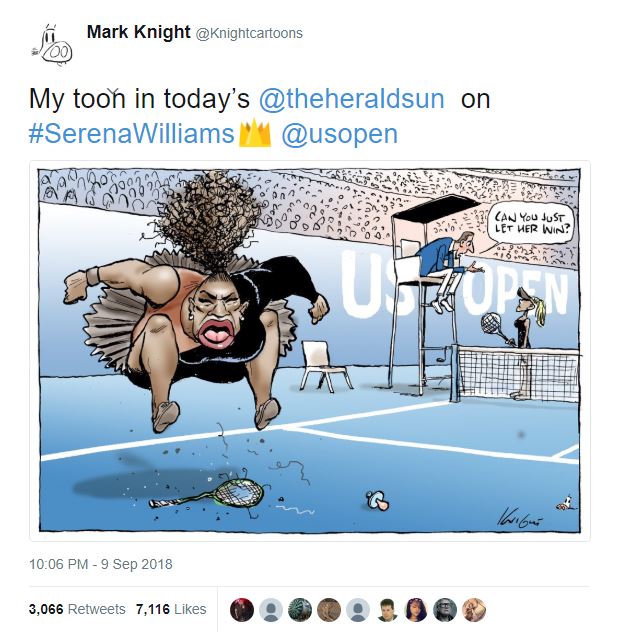 Knight’s cartoon was in response to Serena Williams’ meltdown at the U.S. Open both during and after her defeat to 20-year-old Naomi Osaka at the U.S. Open. According to CNN, Williams claimed umpire Carlos Ramos was sexist after she received a number of code violations during the match which included a warning for coaching. He also penalized her for smashing her racket. Then Williams got a game penalty for the verbal abuse she directed towards Ramos. Williams said, “You stole a point from me and you are a thief.” 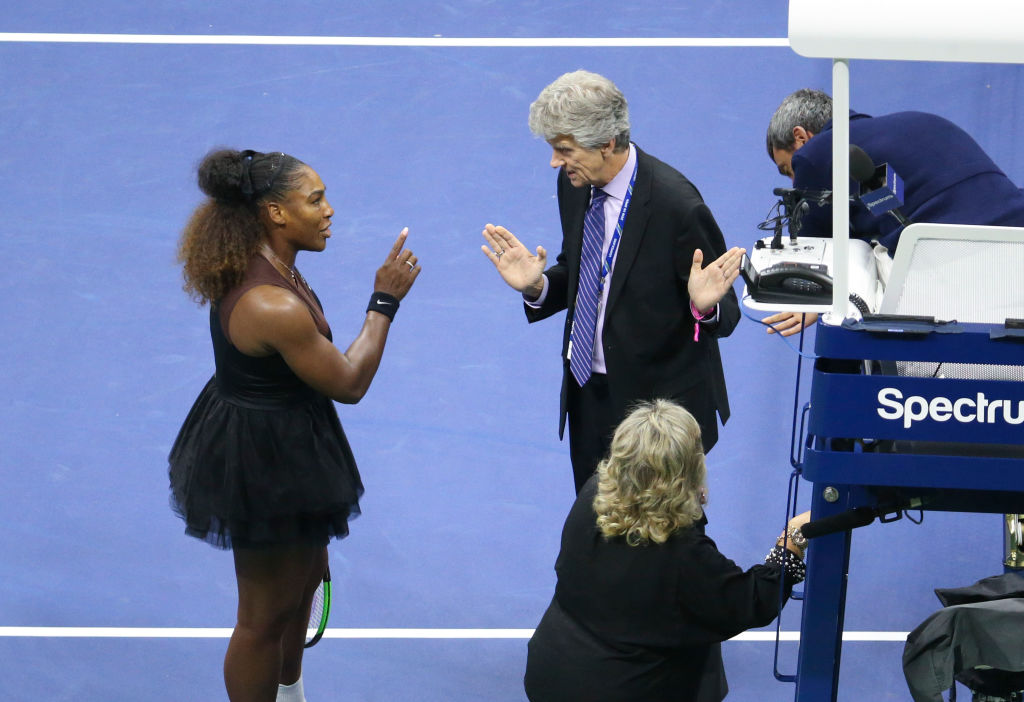 After the match, Williams would declare, “I’m here fighting for women’s rights and for women’s equality and for all kinds of stuff. For me to say ‘thief’ and for him to take a game, it made me feel like it was a sexist remark.” She added, “He’s never taken a game from a man because they said ‘thief.’ For me it blows my mind. But I’m going to continue to fight for women.”

“Carlos Ramos is one of the most experienced and respected umpires in tennis. Mr. Ramos’ decisions were in accordance with the relevant rules and were re-affirmed by the US Open’s decision to fine Serena Williams for the three offenses.”

Where was this cartoon for all the men who have broken their rackets over the years? 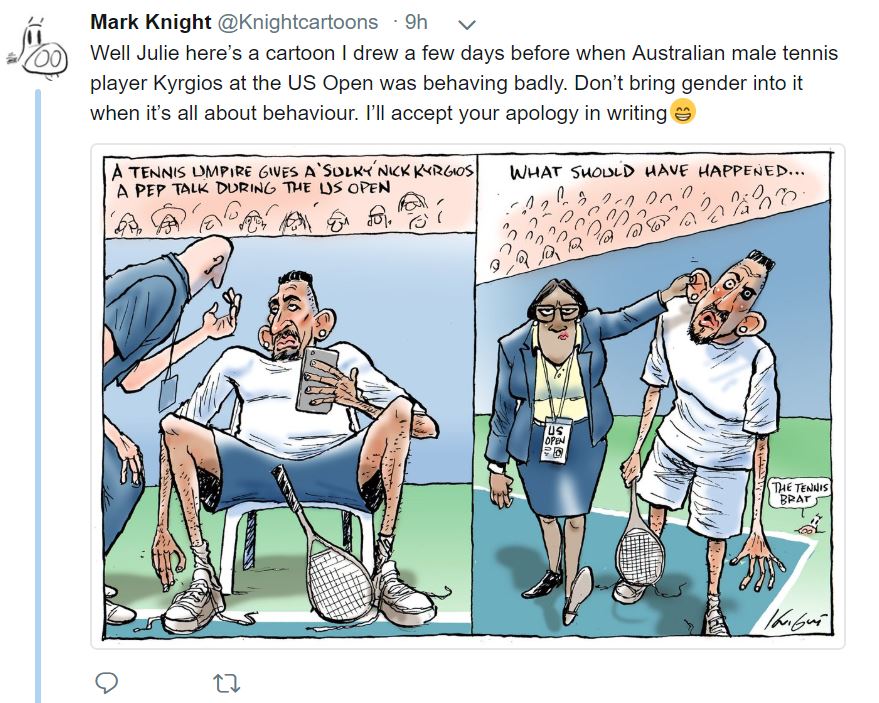 Others would question why Knight gave Osaka a blonde ponytail.

What’s with the blonde hair player talking to the judge. Did u watch the match?

One astute Twitter user would point out that Osaka wears a blonde ponytail.

However, he would go on to recant his observation.

I agree. And I recant my statement after viewing in solely on that and seeing absolutely no dark hair. I just looked at it at a quick glance and recalled her having a mostly blonde ponytail in the match

You can see her blonde highlights in the photo below: 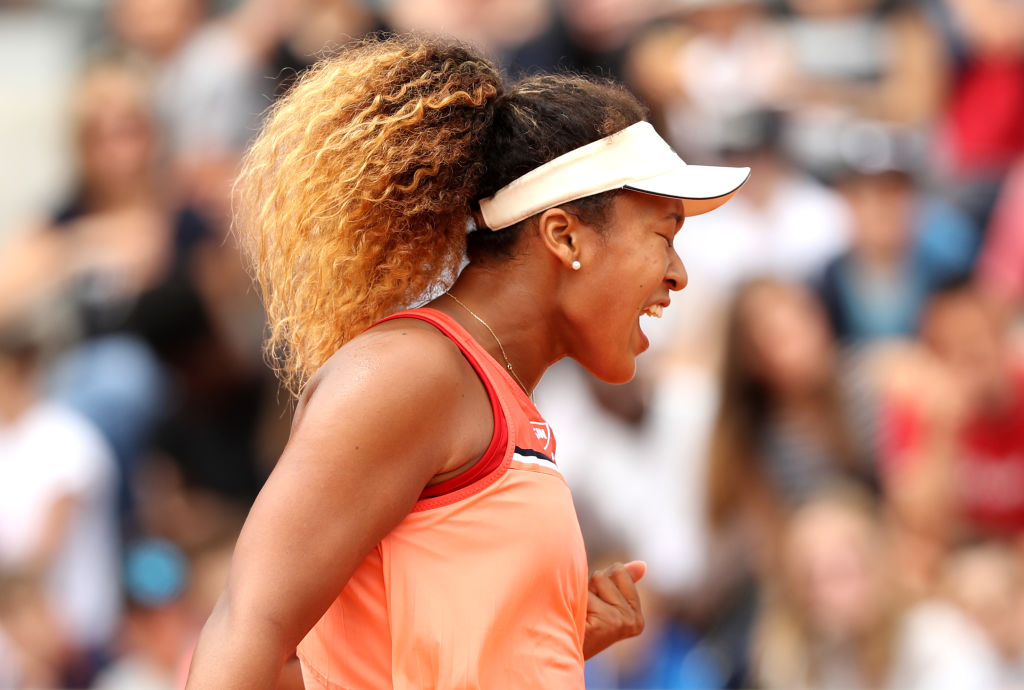 PARIS, FRANCE – MAY 30: Naomi Osaka of Japan celebrates during her ladies singles second round match against Zarina Diyas of Kazhakstan during day four of the 2018 French Open at Roland Garros on May 30, 2018 in Paris, France. (Photo by Matthew Stockman/Getty Images)

Despite evidence to the contrary, a mob of Twitter users would go after Knight declaring him and his cartoon racist.

Mark – do you make these same cartoons for every white male athlete who shows intensity during a heated contest? Or are you reserving it for a black women because of your own biases based on gender and race? Ask yourself in a quiet moment. Then do better.

Looks pretty racist to me.

I was thinking that as well it’s a disgusting racist and sexist cartoon.

He has a racist agenda which is why he did it.

Even former director of the United States Officer of Government Ethics got in on the act.

Herald Sun editor Damon Johnston defended Knight and the cartoon saying the cartoon “had nothing to do with gender or race.” He added, “A champion tennis player had a mega tantrum on the world stage, and (the) cartoon depicted that.”

He also Tweeted out the front page of the Herald Sun that reads, “If the self-appointed censors of Mark Knight get their way on his Serena Williams cartoon, our new politically correct life will be very dull indeed.”

Do you think the cartoon is racist or does it properly satirize Serena Williams’ meltdown after losing to Naomi Osaka.