The Bitter-Sweet End of an Era

[easyazon_link identifier=”B07F6TCWD7″ locale=”US” tag=”boundingintocomics-20″]Buffy the Vampire Slayer, Season 12: The Reckoning[/easyazon_link] spells the end of a long relationship the franchise has enjoyed with the world’s fifth largest comic company, Dark Horse Comics. With the Disney acquisition of 21st Century Fox looming, it was all but inevitable. The comic company has been putting out Buffy-related titles since 1998 while the show was still in production. After [easyazon_link identifier=”B0046XG48O” locale=”US” tag=”boundingintocomics-20″]Buffy the Vampire Slayer[/easyazon_link] ended, Dark Horse Comics picked up where it left off, starting in 2007 with Season Eight. One could argue the franchise played a hand in making Dark Horse Comics the powerhouse it is today (the status of the industry as a whole notwithstanding). Chances are, while this is the end of Buffy at the publication, there is a good chance, that like Star Wars, it’ll continue at Marvel Comics. Question is; should we expect a fresh start after a complete reboot? 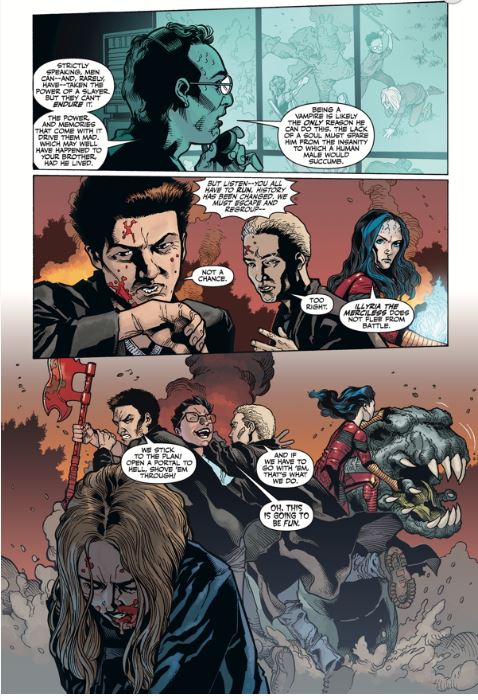 At the end of last month’s issue, we saw the arch villain Harth (the vampirized twin brother of a Slayer from the future) claim all the strengths of the slayer-line for himself by interrupting a process that would have delivered said powers to Buffy. With all that power in his hands, Harth begins to make short work of Buffy and friends who find themselves at his mercy. As the demon horde begins to close in for the final kill, Willow and Dawn enact a plan to open a portal to hell in the hope of trapping them all inside. However, it’ll most likely end with the Scoobies going along for the ride as well. 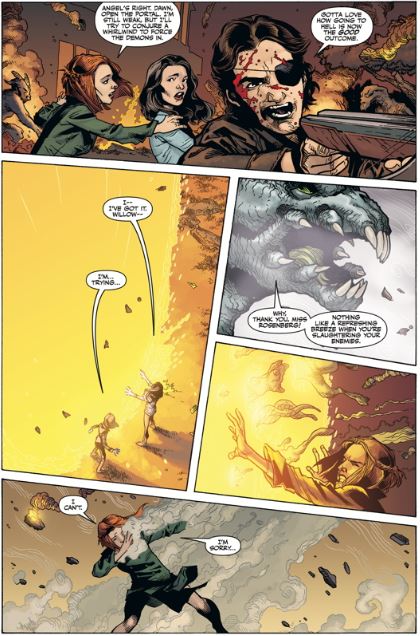 Overall the action and pacing in this issue felt rushed. You can sense that everything is wrapping up as the main threats are dispatched little more than halfway through the book. What’s left over is a ‘slice of life’ segment that just doesn’t feel like the end of the road for the franchise. I’m not sure if writers Joss Whedon and Christos Gage wrote this with the intention of leaving it open-ended, but that’s exactly what happened. I wouldn’t say it was done well because it simply comes off of as anti-climactic.

Georges Jeanty’s pencils are as they were in the prior issue. Not bad, but not great either. Some panels/pages are better than others. Attention to the action in the background is a bit sharper than in the previous issue. There is no real improvement or fall in terms of quality there. 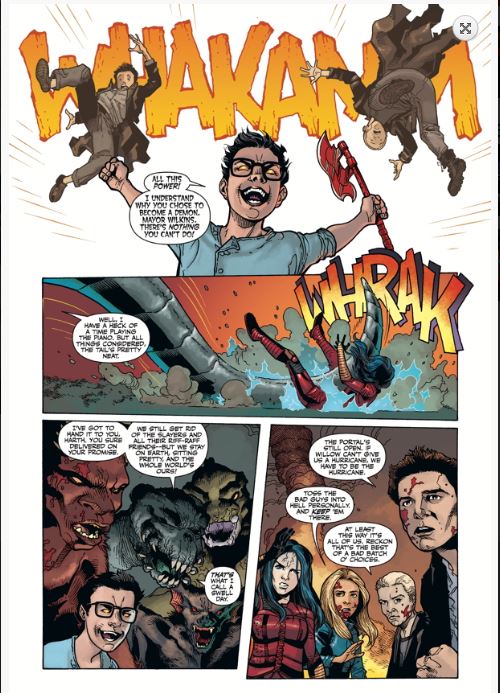 [easyazon_link identifier=”150670915X” locale=”US” tag=”boundingintocomics-20″]Buffy the Vampire Slayer Season 12: The Reckoning[/easyazon_link] is a fine end to an arc. However, I cannot say it was a worthy cap to the long run the franchise has had with Dark Horse Comics. I believe it deserved a better, more coherent sendoff. I suppose it’s hard to plan a story amidst corporate maneuverings. If the creators had been given more time to wrap this up, could the book have been better across the board? I believe so. From a life-long Slayer devotee; it’s a shame that such a storied and fan-loved book has to end on such a tame note. If Buffy is indeed continued under the Marvel Comics imprint, utilizing the same continuity, perhaps it won’t all be for naught.