For as long as man has exercised his dominion over the created world, we have been looking to the heavens and asking one question: “When will we get a Princess/Robot mashup comic book?” Well, Dynamite Comics is finally stepping up to answer this question and set our souls at ease with the first issue of Robots Versus Princesses!

After raising over four-thousand dollars against a twenty-five hundred dollar goal on Kickstarter, creator Todd Matthy brings us his brainchild that takes what looks like Transformers, mixes it with appears to be a stable of Disney-like princesses, and stirs it vigorously. The title makes it sound like something that would air on the SyFy channel, perhaps right after an airing of Sharktopus vs. Whalewolf, but it, surprisingly, comes across far classier and more coherent than the typical out-of-this-world mashups that are so prevalent in and out of the comic book world. 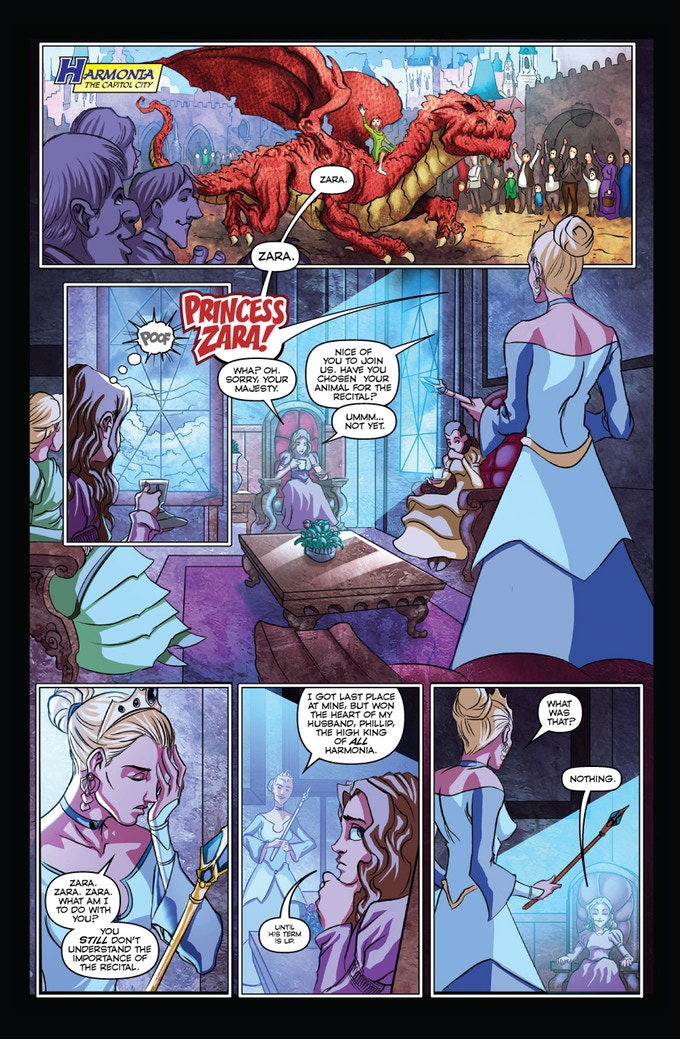 The story focuses primarily on two characters: a bored Princess named Zara, and a desperate Robot named Wheeler. Zara is tired of the roles that princesses are forced to play and Wheeler is looking to escape the war-torn stress of his Cybertron-type world. Salvation for the both of them seemingly lies in the forbidden forest which acts as some sort of barrier between their two worlds. Both robots and Princesses (and everyone else in the kingdom) are forbidden to enter the forest, but Zara and Wheeler both end up doing so and in a bit of serendipity, find each other. They both realize that the other may hold the key for what they each want and by the final page, a new friendship is born.

It’s a good story idea and I am completely on board with the premise. However, trying to establish both sides of the universe in one issue tends to be one of its tripping points. Any introductory issue is hampered with the burden of establishing universe, lore, tone, and character, as well as sufficiently digging its hooks into the reader so that they will want to come back for issue #2. Within the span of 28-30 pages, which most comics are, writers and artists have limited space to introduce you to the story and engage you. But most comics only have to do it with one world; Robots Versus Princesses has to do it with two. As such, we only get a very fleeting glimpse at the worlds of both the Princesses and the Robots. We don’t get enough time to really get any sort of idea of what the world is like, beyond very surface level revelations and familiar tropes. Also, with this being only a four-issue run, I’m afraid we don’t have that much time left for it. 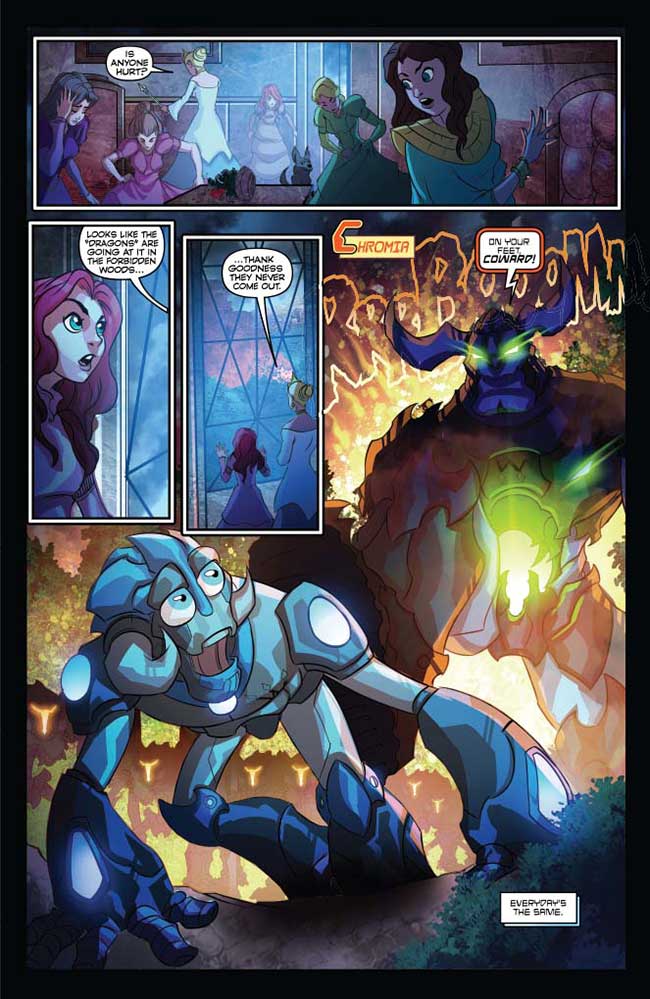 Fortunately, what time we do get with the characters, primarily Zara and Wheeler, is fun and colorful and both main players are entertaining and engaging. Zara specifically jumps the hurdles that trip up most characters with her plight. Often, Princesses who long for something more and eschew what their superiors tell them either fall into the camp of being aggressively annoying, or mind-numbingly boring, since we’ve seen the same trope across hundreds of other stories. Thankfully, Zara is none of these things and she stands on her own as a sympathetic and relatable heroine. Wheeler is also a lot of fun in a bumbling, scared-of-your-own-shadow kind of way. It looks like he’ll be a good source of comic relief moving forward.

I’m also not a huge fan of the artwork in Robots Versus Princesses; mainly because it’s pretty inconsistent. Nicolas Chapuis is obviously talented, but while some of the panels are vibrant and look worthy of Disney, others look like they were rushed projects from Microsoft Paint. The art direction is top-notch and I like the design of the titular robots, but sometimes the art itself looks like it could have come from two different people; one substantially more talented than the other.

In a world where every other day we are getting another crazy genre mash-up, Robots Versus Princesses stands out as a work in which the creators take the material seriously and strive to produce a quality product. For the most part, they have succeeded. The idea is sound and on a surface level, the payoff is worth it. It does end up being a little too rushed though, and the artwork is sometimes distractingly inconsistent. With only three issues left, I worry that it’ll be over before we have a chance to really become invested in the world, but whatever the outcome may be, the characters are charming enough to prove that we should, at the least, enjoy the ride.