Another industry professional has declared their stance against Comicsgate by misrepresenting the consumer backlash, ironically while their very own Kickstarter faces a lack of funding.

Last Friday, famous comedian and comic book writer Patton Oswalt was the focus of a livestream wherein, while discussing general comic book topics, Oswalt (whose comic book credits include Justice League of America: The Lightning Saga, The Goon: Noir, and Serentiy: Float Out) made a point to bring up the Comicsgate movement, only to mock its supporters and dismiss them based on tired stereotypes:

“This whole comicsgate thing is…It’s like a Mr. Show Sketch but for real, where these guys are…it’s straight white men that need to be making comics! And that’s the, you know, remember that oppressed group, straight white men?””

Though it has been proven time and time again that the Comicsgate movement is diverse and inclusive, Oswalt ignores these supporters to disingenuously paint Comicsgate supporters as proponents of racism, sexism, and discrimination based on sexuality. It is a tired tactic that has become ever prevalent in the industry: a comic book professional hand waving the earnest complaints of comic readers whilst simultaneously responding with derision and insults.

“And they’re literally like doing…some…Gail [Simone] was posting some pictures of some guy’s family and they’re making like…Arroyo…something, but she’s like ‘This is rice pudding. They’re making rice pudding for dinner. That’s dinner.’ He went online and looked up the first alphabetical listing of a, a u, a Spanish dish and that’s, it’s just, it’s just you get to watch that flailing on a daily basis.

Yes, Oswalt is correct that arroyo con leche, or simply “rice with milk,” is not a dinner entrée (traditionally it is a dessert dish). However, a cultural error does not negate the fact that Gail and Oswalt were not only mocking a piece of work from 2017, but that they ignore the fact that the artist, Ibai Canales, not only improved his skills, but that said improvement is evident in more recent examples of his work on Iron Sights (which as of this article, has not been released yet). To make a misinformed point about Comicsgate, Simone, and to a lesser extent Oswalt, mocks an aspiring, amateur creator and his attempts to break into the comic book industry for being lesser in quality than books put out by Simone, a seasoned writer whose current work is produced by DC and Marvel. 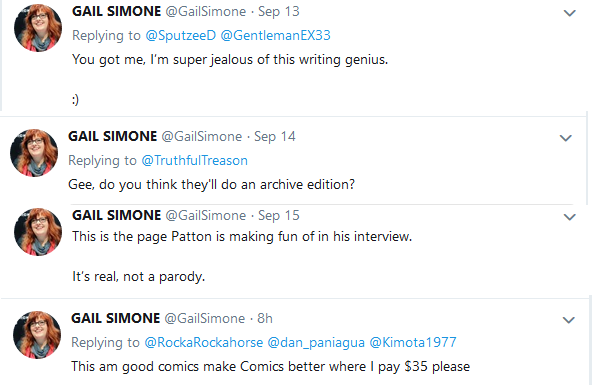 Veteran Comic Book Writer Gail Simone has been obsessively reposting the 2017 Iron Sights preview pages, upwards of 50 times, on her Twitter feed since September 9th 2018, the day she initially tweeted about Iron Sights. Each of these tweets were attached to said preview pages.

As the livestream continues, there is a point where Oswalt speaks out against people whose political ideologies differ from his own:

“It’s what I’ve always talked about; the truly evil are always the most reasonable, well spoken. He’s not some crazed redneck. He’s the kinda guy people would go…’Well maybe we should have him on our show’. That’s the danger of ‘let’s try to have a civilized conversation.’

“They’re not in a Klan robe, they’re a very ‘No, I simply want to present some alternatives that are financially advantageous to both parties.’ That to me, is the most dangerous thing.”

While Oswalt does reference some extremes as his targets of silencing, such as Richard Spencer and the concept of race realism (as touted by Stefan Molyneux), it is an interesting point to make when speaking in vague terms of dangerous parties. Instead of advocating for public debate and conversation, which can not only change people’s views but also expose how truly disgusting some viewpoints are, Oswalt instead believes that these people should not be engaged, for fear of spreading their hateful rhetoric. It is a dangerous point to make, but it cannot be taken seriously from Oswalt, whom mere minutes earlier conflated a consumer backlash based on the quality of books with out and out hatred and discrimination, showing that the definitions of hateful rhetoric are too vague to be taken seriously.

Though Oswalt stands confident in his sweeping generalizations of comic book audiences, he may be in for a rude awakening in the form of his own comic book Kickstarter.

Starburns Presents Comics Comics #1 by Patton Oswalt & pals! is a comic anthology currently being crowdfunded by Oswalt. The anthology boasts a star-studded cast of writers, such as Eliot Rahal (Ninjak vs The Valiant Universe), Sara Benincasa (Sex and Other Human Activities), and Rose Matafeo (Funny Girls), as well as artists including Troy Nixey (Batman: The Doom that Came to Gotham), Evan Dorkin (Milk and Cheese), and Robert Hack (Chilling Adventures of Sabrina). Future issues promise work from Paul Scheer (The League), Sam Jay (Saturday Night Live), and Brent Schoonover (Howling Commandos of S.H.I.E.L.D.) among many others.

However, despite the exceptionally talented team of comedians, writers, and artists, Starburns Presents Comics Comics #1 by Patton Oswalt & pals! may not see publication. The Kickstarter campaign opened on August 22nd 2018, and as of the writing of this article, the campaign has only made $28,067 of it’s $36,000 goal, with less than two days remaining for the campaign. 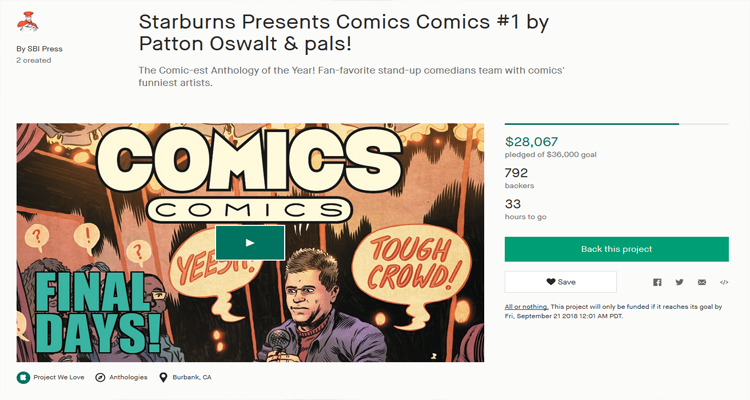 A screenshot of the Kickstarter for Starburns Presents Comics Comics #1 by Patton Oswalt & pals!, taken at the time of this article’s writing. It is rare for a comic book Kickstarter, much less one supported by such a bevy of talent, to perform this poorly in the crowdfunding phase.

It is possible that the credibility and trust of many anti-Comicsgate crusaders has been ruined by history. Many Kickstarters for projects by comic book professionals either fail to raise the funds, or go unfulfilled, much to the dismay of their backers. In contrast, there have been a verifiable slew of independent comic book crowdfunding campaigns, both affiliated with Comicsgate and not, that have not only met their goal, but exceeded expectations (these are not just projects by ‘straight, white men’ either, but also projects by diverse creators). One may disagree with the people behind a given crowdfunding campaign, but hard data supports the reality of the turning tide in the industry.

Though Patton Oswalt disingenuously makes the tried and tired accusations of ‘racism and misogyny’ for the existence of the Comicsgate movement, he may soon have to confront the reality of how audiences react to comic book professionals and their derision as his Kickstarter draws ever closer to failing. There is not a grand conspiracy of racism, sexism, or any sort of discrimination. Perhaps audiences are simply growing tired of being ignored, discarded, and insulted by professionals for simply disagreeing with their opinions or their works.