Social media has been ablaze with the strange absence of Fan Bingbing from the public eye. It was reported last week that Bingbing, who starred in X-Men: Days of Future Past has been missing since June after she was accused of tax evasion. Now, director Feng Xiaogang saw his cameo in Ash Is the Purest White removed. The film is a crime melodrama that follows a young woman and a low-level gangster across almost two decades.

The Hollywood Reporter notes that the film debuted at the Cannes Film Festival in May and was promoted by Fan Bingbing where she walked the red carpet in support of the film. It was one of her last public appearances before she went missing. Feng Xiagang, who is also an accredited Chinese director, saw his cameo in director Jia Zhangke’s film removed when it premiered in China on Sunday. The news of Feng’s role in the film being cut caused a stir in China. Many suspected his part needed to be removed in order for the film to be approved by China’s Film Bureau.

It was also troubling given that Feng was being used to promote the film. His character appeared on a poster for the film when it premiered at Cannes.

Feng is also at the center of an alleged tax evasion scandal in China alongside Fan Bingbing. State television anchor Cui Yongyuan accused Fan of evading taxes using two different tax forms, a smaller one to give to authorities, and a much larger one revealing her real earnings. 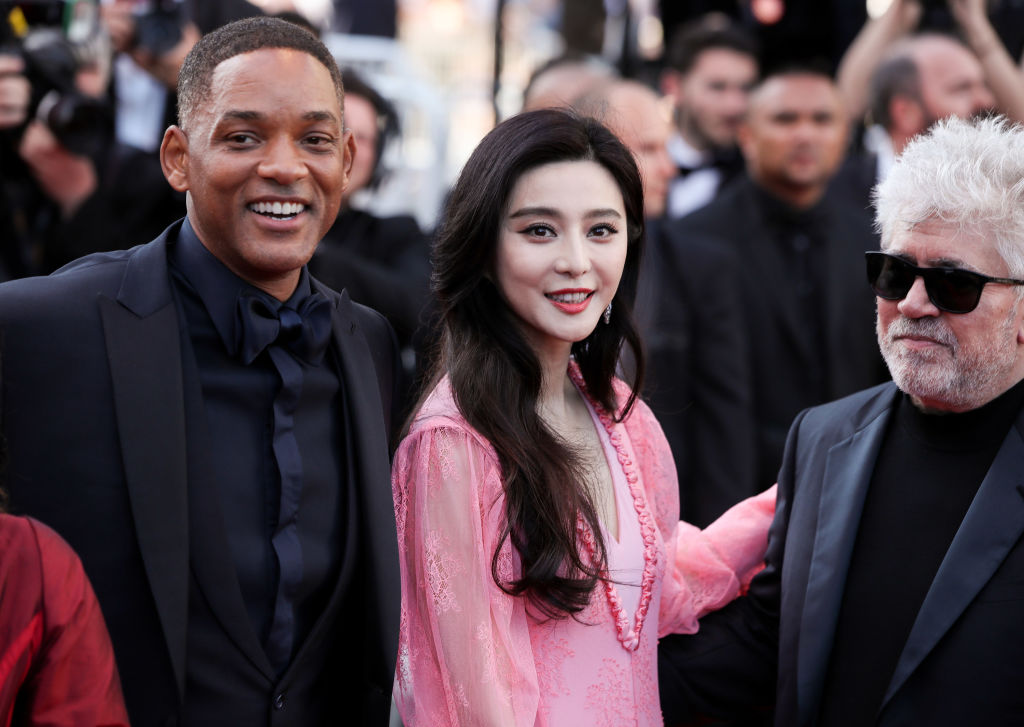 CANNES, FRANCE – MAY 23: American actor Will Smith and actress Fan Bingbing arrive on the red carpet of the 70th Anniversary dinner during the 70th annual Cannes Film Festival at Palais des Festivals on May 23, 2017 in Cannes, France. (Photo by VCG/VCG via Getty Images)

Cui’s accusations came after it was reported that Fan would be starring in Cell Phone 2, a sequel to Cell Phone which was directed by Feng Xiaogang, produced by the Huayi Brothers, and starred Fan. Cui claims the original Cell Phone film is based on his life and damaged his reputation. The film tells the story of a television anchor who has an affair with his assistant, played by Fan. The 2003 film won Best Film, Best Actor, and Best Actress at the Hundred Flowers Awards.

“When I was writing this script, I kept coming back to one line: ‘It’s hard to explain in a few words, and it arouses complex feelings.’ This is the feeling I was going for in the film, and this is how I am feeling right now.”

Not only does Feng’s removal come amidst a potential tax evasion scandal as well as a personal dispute from Cui, but Reuters previously indicated that the Communist Chinese government enacted new policies to police their celebrities whether they be film stars, music bands, or online personalities.

Si Ruo of the School of Journalism and Communication at Tsinghua University explained:

“It is written in our new movie promotion law that entertainers need to pursue both professional excellence and moral integrity. In the unbridled growth of the industry in the past few years, we might have overlooked the need for positive energy, so the government’s intervention is reasonable.”

This sentiment was echoed by Claire Dong, an attorney and partner at Tiantai law firm in Beijing:

Chinese celebrities have also been ranked on their social responsibility which includes moral conduct. Fan Bingbing was ranked in last place with zero points. Chinese authorities have also pledged to “ban stars who behave badly, including drug taking, gambling or visiting prostitutes.”

This move to tighten it’s control over celebrities comes after the Chinese have made a number of moves in purchasing Hollywood studios. Last year, Time reported that a Chinese real estate and entertainment conglomerate bought Legendary Entertainment studio, the company behind Jurassic World. The conglomerate, Dalian Wanda Group, also owns “AMC Entertainment, the U.S. theater-chain giant, and Odeon & UCI, the biggest in Europe.” Wang Jianlin who is China’s wealthiest man and the founder of Dalian Wanda Group bought Dick Clark Productions for $1 billion. Dick Clark Productions produces the Golden Globes and American Music Awards. He also signed a deal with Sony Pictures to finance films.

China’s Alibaba has also signed a deal with Steven Spielberg to produce, distribute, and finance films. A state-owned broadcaster from Hunan province also invested in Lionsgate, the studio behind the Hunger Games.

Time even describes how Communist China has influenced Hollywood:

“China’s box-office weight has already affected the kind of films Hollywood makes. Pleasing Chinese audiences — and a Chinese central government hyperallergic to criticism — is now part of the Hollywood formula.”

“When China was not the market, you just followed the American way. But these days, they ask me, ‘Do you think the China audience will like it?’ All the writers, producers — they think about China. Now China is the center of everything.”