In the wake of a hateful rant directed towards a Comicsgate associated creator by a prominent Image Comics professional, fellow professionals remain silent, exposing the double standard applied to those who disagree with comic book industry insiders.

And let me say how gratifying it’s been in recent weeks to see more and more of comic pros standing up to these bullying, hateful assholes.

For the record: I know not ALL comicsgaters are bullying assholes, but movement’s foundation is built on harassment, misogyny, transphobia, homophobia, as is much of membership & leadership. Regardless of intentions of some, that is Comicsgate’s toxic, inescapable legacy.

Typically, when I or get into it with someone on Twitter, I don’t quote-tweet or draw attention to them. When a comic pro singles out a Muggle during an internet altercation, it can be seen as punching down, so it’s something I like to avoid.

Nasser Rabadi is the writer on the upcoming graphic novel, Brutas The Badass #1 with artist Donal DeLay. DeLay and Rabadi have been longtime proponents of the Comicsgate movement, drawing them the ire of many industry professionals. Though it is unknown what the exact catalyst or reasoning for his tirade, Layman does present the following two tweets from Rabadi’s Twitter feed in the course of his thread: 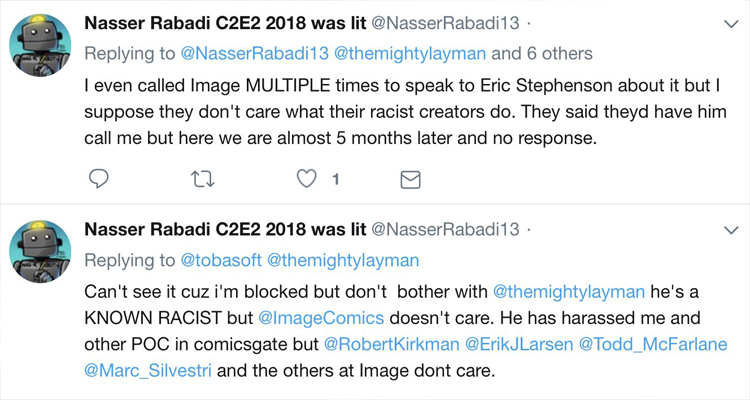 These tweets, posted by Layman in reference to the alleged numerous attempts Rabadi has made to reach out and discuss alleged harassment directed at him from Layman with the Editorial Head of Image Comics, Eric Stephenson. These tweets may have been the catalyst for Layman’s thread.

Rabadi’s allegations that Layman is a racist appear to stem from the fact that Layman’s combative tweets were targeted at people of color, such as fans and Rabadi himself. A search of Layman’s twitter feed does not show the use of any explicit racial slurs nor is there a citation of Rabadi’s race as the reason for Layman’s disdain.

As soon as Layman cites that the target of his ire is Rabadi, the attacks become personal. Layman summarizes why he is not a fan of Rabadi:

Some months ago, Nasser jumped onto my feed after I said something about Comicsgate, with the same tired Comicsgate shtick.

“I’ve got a stack of Marvel comics I can’t read because the boobs are too small and SWJs are bad. Respect me and kiss my ass, because I’m a potential customer who might conceivably someday buy one of your comics.”

Nassir continued to interrupt my feed repeatedly for days, with the same stupid, tired Comicsgate shit. Nassir eventually got blocked.

However, according to a search of both Nasser and Layman’s feeds and their tagged interactions with each other, this never happened. In fact, Nasser’s first interaction with Layman was earlier this year, where Nasser tells Layman that he had desired to pick up Chew, but expressed disappointment that Layman would alienate fans. Layman met this tweet, and the subsequent tweets from Nasser explaining his rationale and attempting to engage in discussion, with insults. Some of these interactions include:

I was gonna pick up Chew, but you rather alienate a section of fans that buys comics. 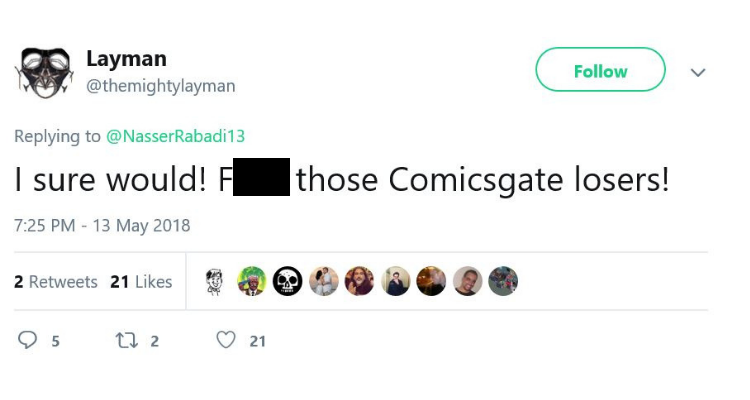 I don’t know Mags or Michelle either but I liked what I’ve seen/read.

I don’t know Meyer either but he seems like human dog shit.

They’ve done terrible stuff. I don’t know how people can belittle and turn away customers.

Even if I don’t change your mind or convince you on anything, just know it starts with no buying Chew, and it spreads to not buying any of your material. Me and 1000s of others.

“I don’t know how people can belittle and turn away customers.”

Have you not been reading my responses to you? That’s a pretty good tutorial of how it’s done. HAW!

You wouldn’t understand it. And it would not “move the needle” for you.

Twitter searches also reveal that, until the recent rant by Layman, he and Nasser had a limited amount of interactions. After the May 20th back-and-forth, Nasser and Layman never directly interacted until the recent rant, aside from being tagged in various Comicsgate-related discourses. However, this does not imply they were actively engaging each other, but rather that their accounts were tagged by others to raise the visibility of a respective discussion. 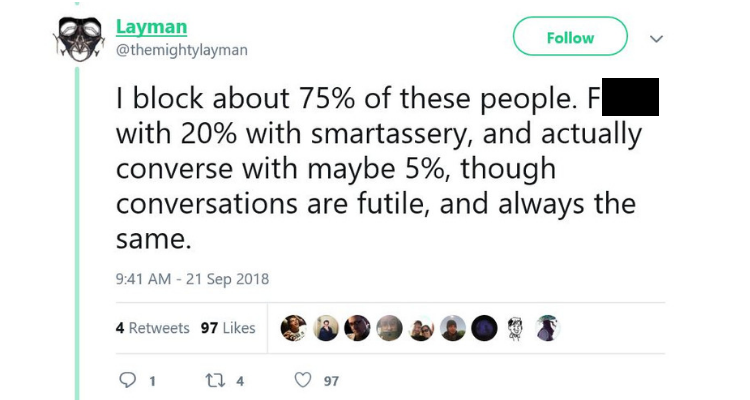 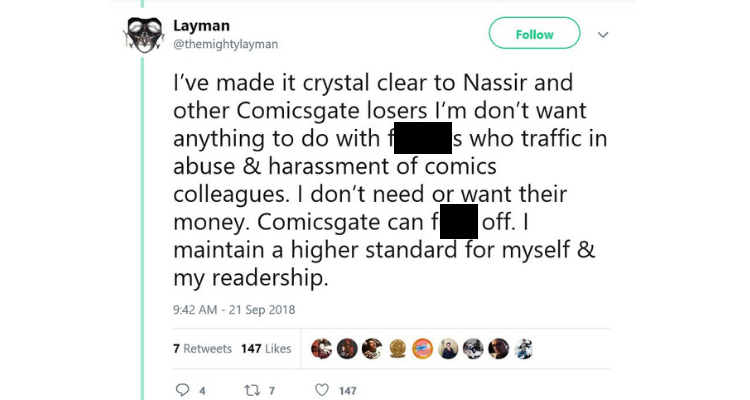 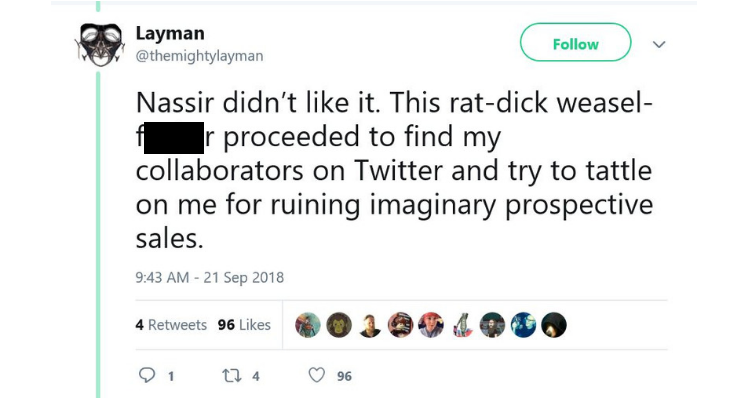 This human rabbit turd then went to FORMER collaborators and did then same. THEN to all the Image partners he could find on Twitter.

While Nasser did in fact tag creators and professionals associated with Image while discussing Layman, the tweets were not “tattling,” but rather asking for clarification as to the acceptability of Layman’s public behavior while representing Image:

Potential customers are essential, Erik. Look at how Shadowline called me a nitwit and liked Johns tweets cursing me out and calling me names. Is that how @ImageComics is supposed to treat customers? Shadowline is part of Image.

This whole thread and you haven’t once remotely said that any behavior of cursing out a customer was wrong. Maybe it’s a waste for Image to do it every single time, but here we are you won’t even admit it’s wrong.

No, I can’t assume they agree or disagree. It would be NICE to hear from someone at Image, whether it’s you or one of the other partners I look up to, and have them step in and say to knock it off. How many times do they have to insult customers before Image apologizes?

You make it seem like it’s silly to want professionalism. Not just you but a few others too. I just don’t get why creators can be so rude to customers and not single publisher- like any normal boss/company- says something.

Does he ask you before alienating such a large audience of customers? And are you cool with him costing you money? pic.twitter.com/aM0FYmSnN8 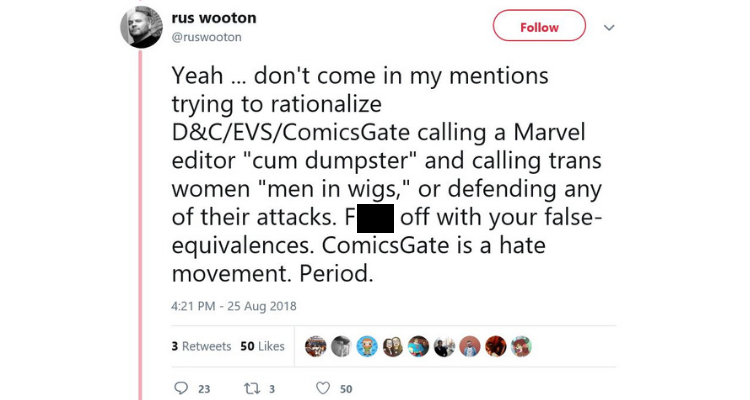 I apologize for everything I’ve ever done of said.

I think it’s better to NOT say toxic shit in the first place. Maybe it’s just me.

Even Layman himself had previously tweeted his disapproval of the use of the term:

Layman’s rant continues further, devolving into tired strawman arguments against Comicsgate (all of which have been regularly and definitively disproven) and more personal insults:

If you show up on my timeline I have no idea what your race is. At least half of Comicsgate tweeter are sock puppets, w/ fake bios, because primary accounts have been blocked or banned, and/or they’re trying to make their loser clubhouse look bigger and more diverse than it is.

And if they’re not a WHITE Comicsgate incels, I STILL assume that other stuff. Except maybe their crusty anime sex pillow is imagined as Captain Marvel with Stormy Daniel’s boobs and Richard Meyer’s goofy bowl cut. 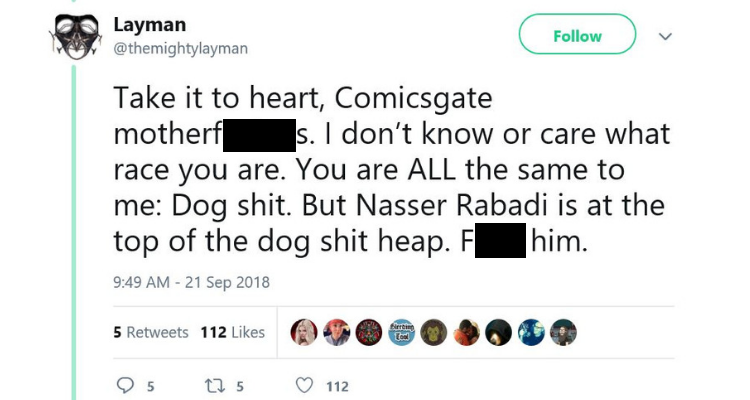 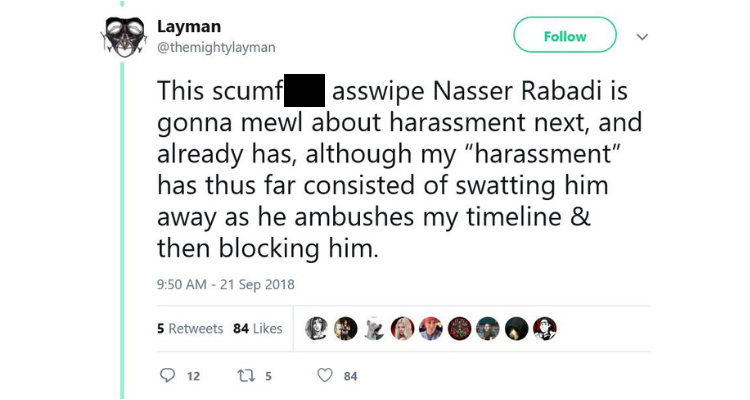 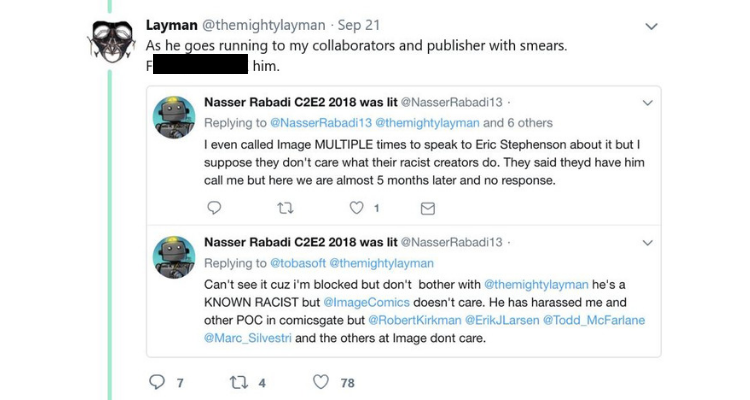 Final tweet and the moral of today’s story, folks: You put your hand in the Layman tiger cage, you’re gonna get bit!

This was not the final tweet on the subject. A few hours after the initial thread, Layman responded to the criticism and condemnation he was receiving from fans:

Getting a lot of replies to thread today and don’t really have time to give you the replies you deserve. Rest assure I love you one and all.

Unless I have you blocked. Those people I want Mags to hit with hammers and Michelle Perez to blow up with IEDs!

Nasser would state that he doesn’t believe John Layman is racist, and explains why he described Layman as racist.

I don’t think he’s racist. I called him that because if we play by his “all criticism is racism and harassment” rules, then he is a racist. https://t.co/DFz9cBuNG3

Following this attack, Nasser reached out again to Image partners asking for response to the tweet storm:

While most Image partners have not issued a statement regarding Layman’s rant, Erik Larsen (Savage Dragon) engaged directly with Nasser:

That’s NOT harassment. It’s somebody defending themselves and I see absolutely no evidence of any racist behavior. “Asshole” is not a racial slur.

You’re just gonna let him talk to customers like that and not care?

This tweet by Larsen reveals a shocking double standard on the subject of conduct and interaction. According to Larsen, it is acceptable to harass Comicsgate affiliated creators and fans, but if an industry professional exhibits the same behavior, then it is out of self-protection and is explicitly not harassment. 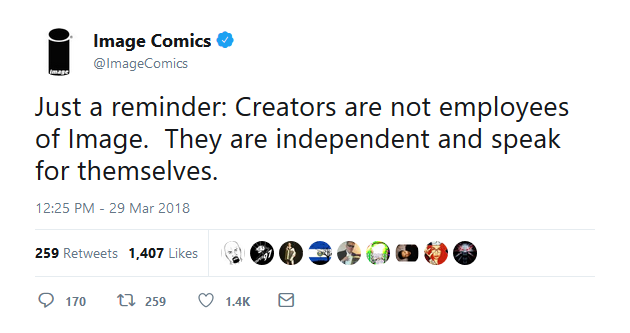 This disclaimer, currently the pinned tweet on the Image Comics twitter page (@ImageComics), absolves Image of the views expressed by their creators. As such, while Image may issue a statement in the future, they are under no obligation to do so, as creators are contracted and thus do not represent Image. It is unknown if this distinction also applies to co-founder and partner Erik J Larsen.

This, unfortunately, is not the first time audiences have seen a hypocritical double standard expressed in the actions and words of professionals.  Recent months have seen Vertigo Comics artist and former Marvel artist Robbi Rodriguez tweet a sexually explicit image towards Ethan Van Sciver, Richard Pace insinuated that Mitch and Bettie Brewster deserved to face threats of violence, and Jeremy Hambly was physically assaulted for his personal opinions, among many other instances of harassment and libel from Comicsgate opponents. The hypocrisy is even more blatant when taking into consideration Rabadi’s Brutas The Badass collaborator Donald DeLay received a suspension from Twitter, allegedly due to his use of a singular vulgar adjective towards Magdelene Vissagio. It is curious that the use of an adjective (albeit an unnecessarily vulgar one) warrants a suspension, while a vulgar, multi-tweet thread directed at another creator warrants no action or condemnation.

Professionals have been quick to condemn Comicsgate at every turn yet stay suspiciously silent in condemning their fellow professionals when they engage in the very behavior they claim to be opposed to. Some, such as Larsen, jump to defend their associates and excuse their behavior, seemingly on the basis of holding an imagined ‘moral high ground’ over their opponents. Behavior like this is unacceptable on either side of a civilized debate and discussion. It is a massive hypocrisy for one to condemn such behavior and in the same breath then engage in and excuse the said behavior merely because it is being perpetrated by someone ‘on their side’.

The divides and animosity between creators/professionals and their audiences grows wider every day, thanks in part to increasing frequency in personal attacks from both sides of the debate such as this. Until disingenuous personal attacks and falsehoods are equally condemned by professionals across the board, based on actions rather than the alliances of the perpetrator, the comic book community will continue to fraction and splinter as fans and aspiring creators turn away from a once beloved medium out of fear of their own mental and physical well being.

**Editor’s Note** This article has been updated indicating that after the article was published Nasser Rabadi notes that he does not believe John Layman is racist.