Diversity & Comics aka Richard Meyer has filed a civil suit against Mark Waid for tortious interference with contract,  defamation, and exemplary damages.

Meyer is suing for “actual damages of over $75,000; special damages in the form of lost profits proximately caused by Waid’s interference with Meyer’s contractual relations; exemplary damages, costs of court; and all other relief to which Plaintiff Richard Meyer shows himself to be justly entitled.”

You can view the full court documents below:

Meyer’s accusation of Tortious Interference with Contract cites his contract with Antarctic Press and the fact they were supposed to publish Jawbreakers and other comic books.

The suit claims that “Waid either had knowledge of the contract or had knowledge of facts and circumstances that would lead a reasonable person to believe there was a contract in which Meyer had an interest.” It goes on to state, “Waid induced Antarctic Press to breach its agreement with Meyer.”

The suit notes “Waid’s interference proximately caused injury to Meyer for which he seeks damages in excess of $75,000.”

“Waid intentionally published statements of fact to his followers and the general public regarding Meyer, including falsely stating that Meyer published the first and last names of comic book store employees to encourage owners to harass and threaten them, as well as characterizing Meyer as a racist, serial harasser of minorities, and as affiliated with white supremacists. Those states were false and were published with actual knowledge of, or reckless disregard for statements’ falsity.”

The suit goes on to claim Waid made Exemplary Damages against Meyer.

“Meyer’s injuries were the result of Waid’s malicious acts. Waid acted with the specific intent to cause substantial injury or harm to Meyer when he interfered with Meyer’s contractual relations and defamed Meyer.”

“Waid had actual, subjective awareness of the risk of harm to Meyer but proceeded nonetheless to defame Meyer and to interfere with Meyer’s contractual relations with conscious indifference to Meyer’s rights, safety, or welfare. Likewise, when viewed objectively from Waid’s perspective, Waid’s actions involved an extreme degree of risk considering the probability and magnitude of the potential harm to Meyer.”

The suit’s claim for tortious interference is backed by a timeline of events.

At the end of April, Meyer’s Jawbreakers – Lost Souls campaign had raised over $110,000. By the time the campaign ended on May 9, 2018, Meyer had “agreed on the terms for publishing Jawbreakers” with Antarctic Press.” The agreement would see Meyer and Antarctic press split the profits 50/50 after production costs. The suit also notes that Antarctic Press had agreed conceptually to publish future books written by Meyer including Iron Sighs, and future Jawbreakers installments.

Following the conclusion of the crowdfunding campaign, the suit alleges that a number of “certain retailers aligned with Waid and his followers had agreed not to carry Meyer’s book and to boycott Antarctic Press because of the misinformation being spread about Meyer and his views.”

The suit states that Antarctic Press was not flustered and stated, “That just shows me we’re doing the right thing standing with you.” And in fact, they would announce publicly, “It’s official! We’re publishing Jawbreakers in September!”

The suit then notes that’s when Mark Waid and his followers got involved. Less than 36 hours after Antarctic Press’ announcement Waid tweeted to his followers:

“I have a call in to Antarctic Press. Until I hear back, I’m (hesitantly) willing to give them the benefit of the doubt that they don’t really understand who or what they’re getting into business with, which – though it would seem a stretch – is a possibility. If I do hear back, I’ll report in.”

The suit then claims that Waid’s followers targeted Antarctic Press with an onslaught of calls and threats. It also states they bombarded the owners of Antarctic Press’ other businesses.

It goes on to detail that Waid did speak via telephone with the one of the owners of Antarctic Press and convinced him to “repudiate its contract with Meyer.” The suit claims the owner “caved to Waid’s pressure” because they were “frightened for its very survival by Waid’s threats, and primarily because of his unwelcome interference.”

Antarctic Press would eventually drop Meyer’s Jawbreakers in a statement:

Many forces, many of them should be viewed with great trepidation about how our society acts, have led us to this decision. We do not take this decision lightly as we do believe that there should be separation between “ART” and the “ARTIST” and that separation has been blurred in our decision.”

The suit continues to state that Waid deactivated his social media profiles almost immediately after Antarctic Press’ statement with the belief he had been warned that his interference was actionable.

It then adds that Meyer was unable to find another publisher for his book due to Antarctic Press’ experience. It forced Meyer to self-publish by creating his own publishing company.

The suit notes the creation of the company came “at significant expense.” It also caused a “significant delay in publication of Jawbreakers.” Meyer has had to take on the tasks that Antarctic press would have performed without Waid’s interference. It’s also limited his ability to pursue other business interests including write more comic books.

It also claims that “Meyer has been effectively blackballed by the comic book industry.” It states, “No publishers, independent or otherwise, are currently willing to consider working with Meyer on Jawbreakers or future projects.”

Not only does the suit state he’s been blackballed, but it also states that Meyer has lost access to conventions and convention panels and “is a direct result of Waid’s interference with Meyer’s contract with Antarctic Press and false statements.”

Meyer had previously discussed suing Mark Waid back in May, after Antarctic Press revealed that Waid’s phone call did affect their decision to drop Jawbreakers – Lost Souls.

As you can see below they note that “Mark shed more light on the situation, and other factors came into play that do involve any staff or freelancers at any other company, that led us to our decision.” 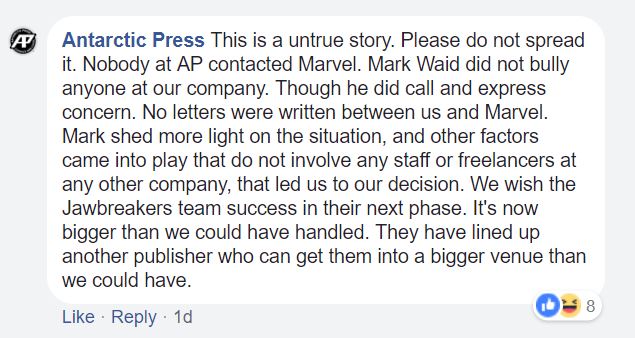 Mark Waid is represented by Mark S. Zaid according to Bleeding Cool. The suit was filed on September 19, 2018 in the United States District Court in Austin.

Waid’s lawyer spoke to Bleeding Cool about the suit:

“Mark will aggressively fight this frivolous lawsuit with every legal means available but at the end of the day what will have the greatest favorable impact for him are the actual facts. Mr Meyer’s’ lawsuit will further reveal to the world his true nature. Ironically his own litigation will likely increase the professional isolation he alleges Mark has caused.”