Amazon recently took down Dark Legion Comics and Will Caligan’s [easyazon_link identifier=”9527303397″ locale=”US” tag=”boundingintocomics-20″]Gun Ghoul[/easyazon_link] issues. All four issues were blocked from Amazon’s store and unavailable to customers for a little over week. This block specifically applied to digital editions of the books. Print editions were not affected. 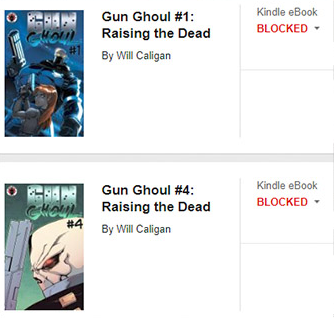 This isn’t the first time that one of Vox Day’s publishing companies has had their books removed from Amazon. Vox Day tells us that Johan Kalsi’s [easyazon_link identifier=”B06XFQ24QC” locale=”US” tag=”boundingintocomics-20″]Corrosion[/easyazon_link] was unpublished multiple times when it was released in 2017. At the same time Gun Ghoul was taken down, Amazon also removed Corrosion from their store citing misleading information. However, that book has also been restored and is now available on Amazon.

“To be clear, the fault was definitely NOT with Amazon. Amazon acted very quickly to restore Corrosion; it was actually restored before we’d even noticed it had been unpublished. Amazon also unblocked the publishing of the four Gun Ghoul digital titles as soon as they had the chance to review the contract proving that we held the necessary copyright. Because the print edition of Gun Ghoul was never blocked on copyright grounds, we suspect that the problem with the five titles was malicious interference by a rogue SJW employee who only had access to the ebooks. We believe this employee misunderstood the ComicsGate controversy – if so, he was hardly the only one to do so – and did not realize that the controversy did not apply to the digital editions because they were only ever published under the Dark Legion imprint.”

It’s highly possible that a rogue employee could have done this. There is precedent for employees doing this. Last November, a Twitter employee deactivated President Donald Trump’s Twitter account as he was leaving the company. Twitter discovered the issue and restored it within 11 minutes.

Twitter explained the situation, “We have learned that this was done by a Twitter customer-support employee who did this on the employee’s last day. We are conducting a full internal review.” They also noted, “We are continuing to investigate and are taking steps to prevent this from happening again.”

This also isn’t the first time that Amazon has taken down books in recent months. In September, the Huffington Post reported that self-described pickup artist Daryush “Roosh” Valizadeh had nine of his books removed from Amazon.

Do you think this was a rogue employee who blocked digital sales of Gun Ghoul? Or do you think it might be a systemic problem at Amazon where they are acting as a censor to block and remove content they disprove of.