“Billy, I’m only certain of two things in this world. The sun rises in the East and Jason trains in the morning.”

There’s something to be said for reading a comic based on a licensed property. Especially one as nostalgic and old as the Mighty Morphin’ Power Rangers. You can’t help but hear the original voices of the actors as you read. Don’t get me started on X-Men, I will forever hear Cathal Dodd’s interpretation of Wolverine! But it’s not just the voices. It’s the sound effects and the background music. I dare you 90’s kids to read any of BOOM! Studios’ Power Rangers titles and claim that you’re reading voices aren’t forever tarnished! While thumbing through [easyazon_link identifier=”B07HQWN91Y” locale=”US” tag=”boundingintocomics-20″]Go Go Power Rangers #13[/easyazon_link] I found myself completely immersed in a story that was brand new, yet felt 100% familiar. 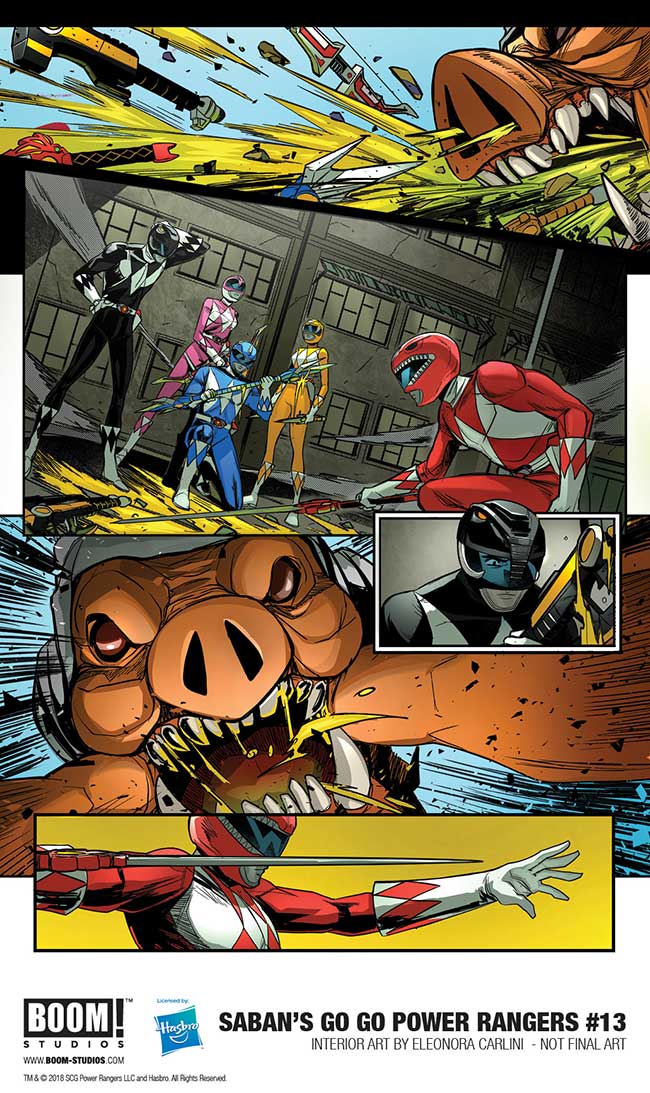 Touching on the familiarity I spoke of, GGPR #13 started off with something that took me all the way back to good old 1993. Pudgy Pig! I don’t know what it is about that episode that just does it for me. Perhaps it’s because of how much it encapsulated everything that made those early episodes of Power Rangers so great. For the most part, the Rangers’ fight against Pudgy goes down the way it did on screen. The rest of the issue plays out like an adventure that occurred between episodes. Trust me, as someone that has seen every episode of MMPR, this didn’t happen in the original show! 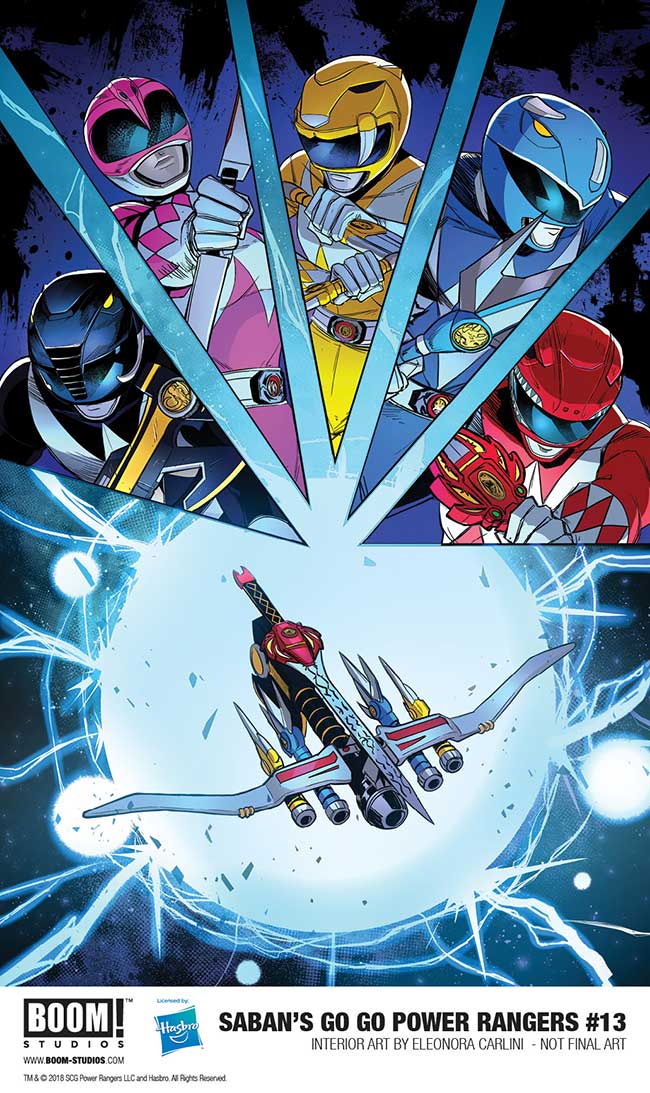 Funny enough, the best part about this issue wasn’t the nostalgia factor. It was how much time writer, Ryan Parrott, spent on Trini. From a heartwarming conversation with her 90’s-mom-jean wearing mother, to the concern she showed over Jason’s recent absence from Ernie’s Juice Bar- Trini got the most out of this issue. It’s a well-known fact that the actress that played Trini, Thuy Trang, passed away tragically in 1996. So, please, excuse me if I’m a little touched by her heavy usage here.

After defeating the Pig, the Rangers are summoned to New York where Rita has personally launched an attack on a small amusement park. As the Rangers spring into action, Rita actually succeeded in opening a portal (I say ‘actually’ because Rita rarely achieved her goals in the original show). She entered it but before it could close, Trini and Jason are dragged in soon after by an enormous Putty Patroller. The end result of the ride leaves the two heroes bewildered as they find that they are no longer on Earth.

Other than the much-appreciated adventure, each Ranger either shares a moment alongside another teammate or goes through a very personal piece of character development. That’s something we didn’t get much of during the first season or two of the show. 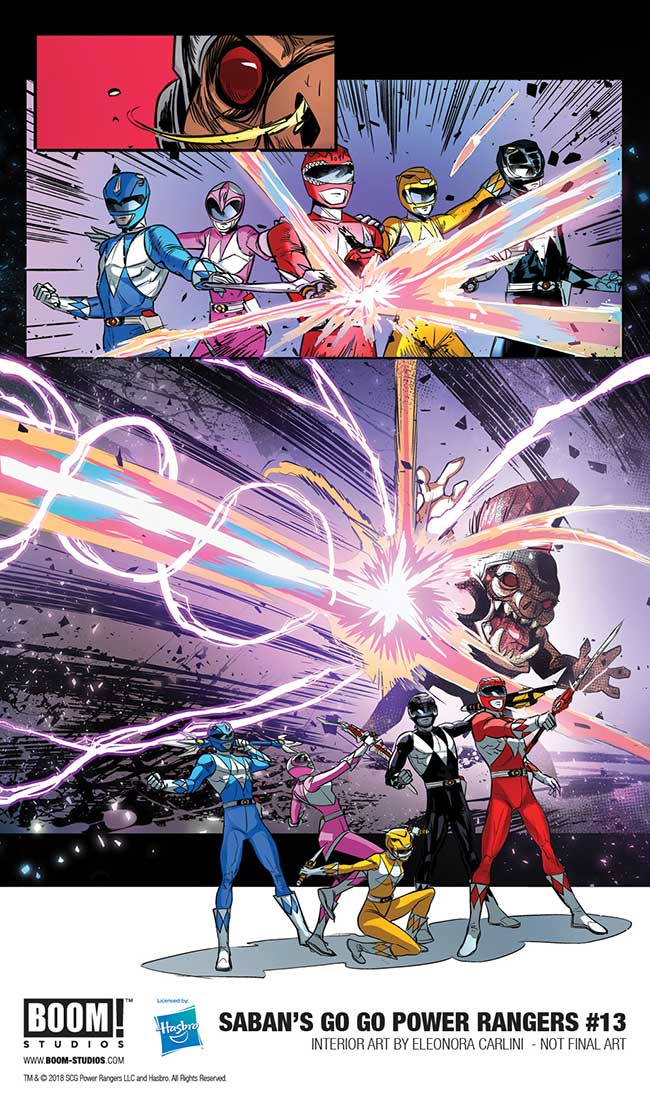 [easyazon_link identifier=”B07HQWN91Y” locale=”US” tag=”boundingintocomics-20″]Go Go Power Rangers #13[/easyazon_link] is a great jumping on point for any fans of the franchise. Moreso after the stellar Shattered Grid event, and the anniversary episode that aired a few weeks ago, it saw the return of several past Power Rangers, including the mac-daddy of them all, Jason Frank’s, Tommy Oliver (the episode wasn’t all that great, but his fight scene was dope)! Artist Eleonora Carlini does a great job of adding her own spin to the characters while maintaining their individuality. Beyond their color-coded clothing, each ranger is always recognizable, throughout the book. Carlini’s attention to detail cannot be overstated here. She embraced the 90’s era without making it look as distracting as an episode of Saved by the Bell. Overall, this issue was a joy to read and has me looking forward to the next, especially because I’ve seen some solicits that gave away an interesting character pairing. Be morphinominal and give this book a Go! Go!