Uncle Scrooge is still going strong these days thanks to Disney’s reboot of the beloved DuckTales TV show, as well as IDW’s continuing efforts to bring us Disney comics from overseas and translate them to English for all of us over here in the USA. Or other English speaking countries like….. Canada, I guess? Canadians like Disney, don’t they?

Anyways, I haven’t cared a whole lot for their ongoing Disney Showcase series, so I was hesitant to read through this one, as I have always loved Scrooge, Donald, and the rest of the Disney Ducks. Luckily, [easyazon_link identifier=”B079YGL6JP” locale=”US” tag=”boundingintocomics-20″]Uncle Scrooge #38[/easyazon_link] is a faithful representation of Scrooge in both attitude and essence.

The issue is split up into two stories, one starring Scrooge which takes up the bulk of the book and one starring Donald and Gyro which constitutes only a couple of pages at the end. In the main story we get a classic confrontation between Scrooge McDuck and Magica De Spell. She is, of course, seeking Scrooge’s #1 Dime. Gyro helps Scrooge by developing a magic detecting security system (I don’t know, man, it’s a cartoon. Just go with it). Magica is, obviously, thwarted and it leads her to seek out alternative methods to retrieve the dime. 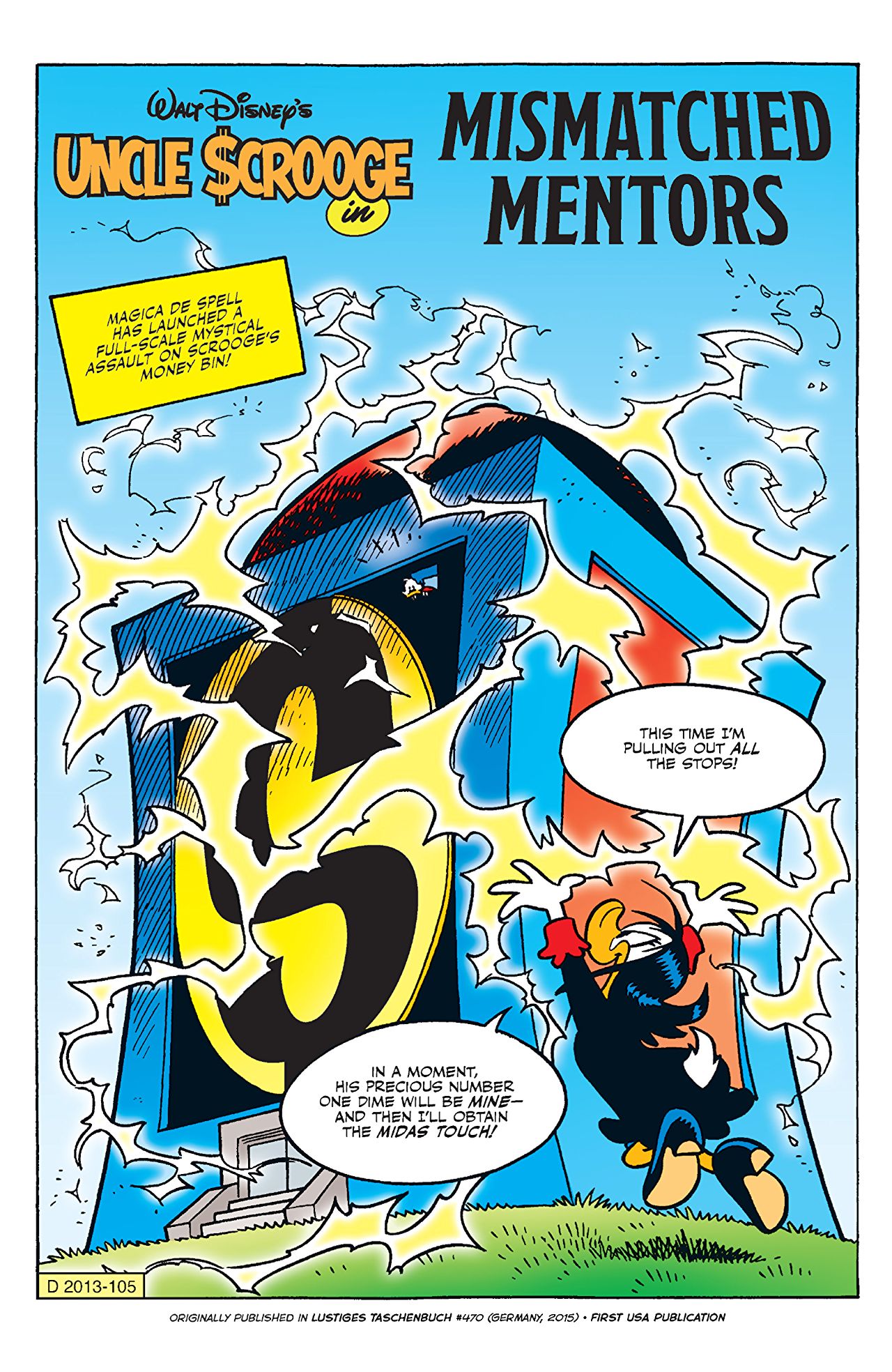 This is where the story finds most of its fun. Magica attends the Mage Mentoring Conference in order to recruit a protege to help her and coincidentally, Uncle Scrooge himself is forced into taking on a protege for himself by his fellow millionaires. It’s great fun watching Scrooge deal with a young, eager duck who wants to do a good job for him, but Scrooge hates that he’s there and can’t stand the sight of him.

Scrooge’s attitude is one of the selling points of this book to me. In comics (where he actually got his start) he has always been significantly more surly than he was in the DuckTales TV show. He was softened a bit to appeal to the age demographic of that show, but in the comics, Scrooge cares much less for what people think about him and his charmingly contentious attitude is on full display here. He’s a lovable grump who is easy to cheer for, mainly because his opposition is always just more evil than he is. Magica is also written extremely well too and the interaction with her protege, while not as funny, are on point for her character. You can practically hear Alan Young and June Foray when you read both these Duck’s dialogue. 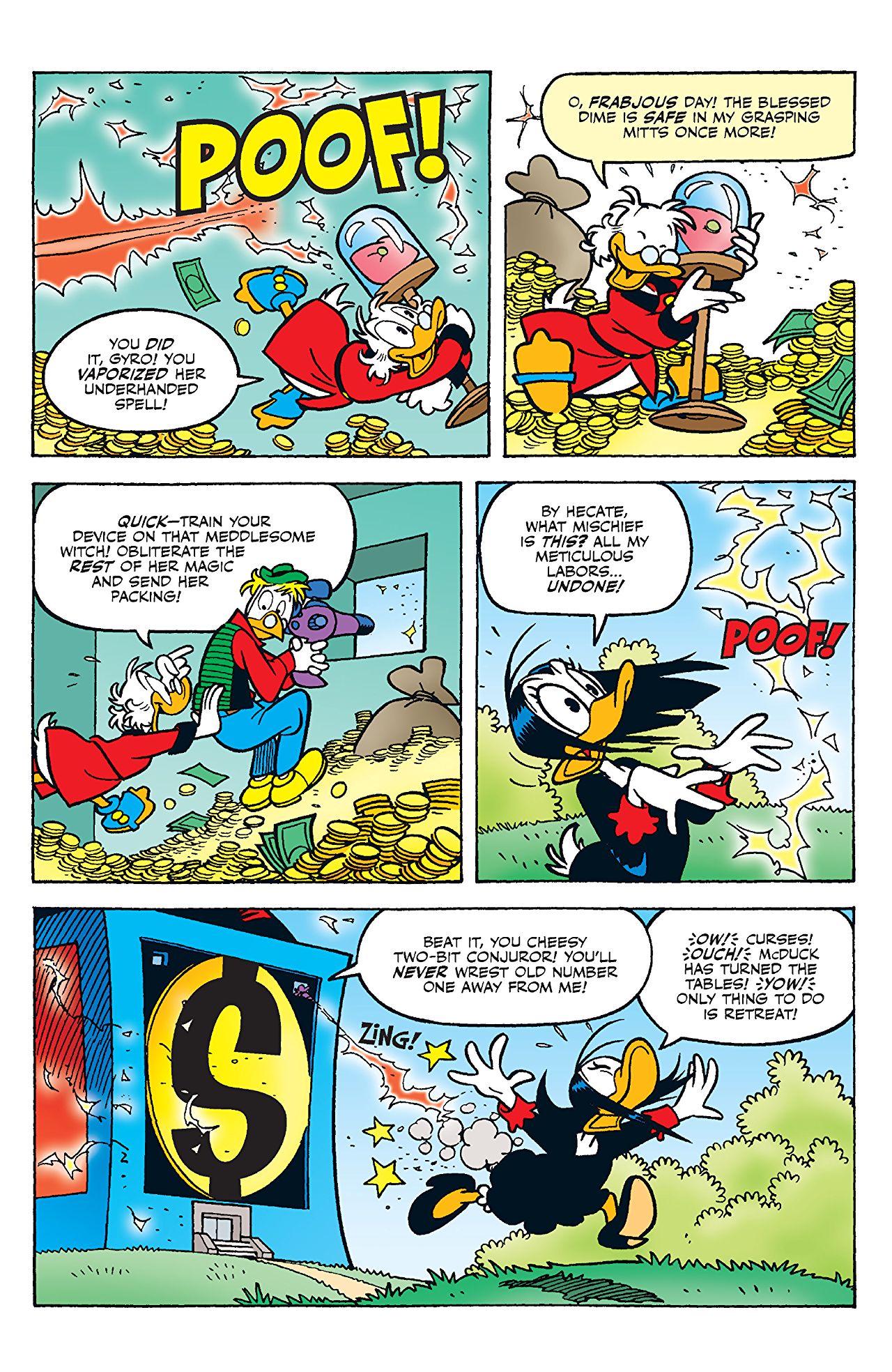 The second story, while very short and light, is funny, if ultimately forgettable. It revolves around Donald and Gyro attempting to find some solution to their woes of only being able to afford beans to eat. They’re not trying to make more money, mind you; their just trying to change the taste of the food. It’s whimsical, breezy fun, but that’s about it.

The biggest flaw I would have with this issue is that I almost feel that the artwork is almost too cartoony, but this really only applies to the main Scrooge story. I know that sounds funny when it’s in reference to a comic based on a cartoon, but the artwork is highly stylized in an almost distracting way. It’s a light complaint, however, as it didn’t detract from my enjoyment even in the least; it’s just something I noticed.

While I haven’t loved everything from IDW’s Disney line, I was pleasantly surprised with [easyazon_link identifier=”B079YGL6JP” locale=”US” tag=”boundingintocomics-20″]Uncle Scrooge #38[/easyazon_link]. The essence of the characters in this issue are intact, and that is the biggest hurdle that these comics tend to trip up on. I loved Scrooge’s interactions with everyone he came across and I could have easily seen this as an episode of the DuckTales TV show, although I’m sure Huey, Dewy, and Louie would have found a way to get in on the action. Uncle Scrooge has a long history in comic books. Uncle Scrooge #38 from IDW does his legacy service in a way that makes sure kids as well as adult will find plenty to like.