Rogue and Gambit’s ‘honeymoon in space’ continues, but will the newlyweds survive it?

It is a good time to be an X-Men fan. After what felt like a decade’s worth of back burning stories, odd character interpretations, and lackluster art, the X-Men appear to be returning to form. Jean’s alive again, the real Wolverine is back, Jubilee is making firework puns and yes… ladies and gents- Rogue and Gambit are married. Yeah, yeah; old news. But not so old that I don’t look forward to Kelly Thompson and Oscar Bazaldua’s book each month as the newlyweds do what X-Men do so well… make a mess of space. 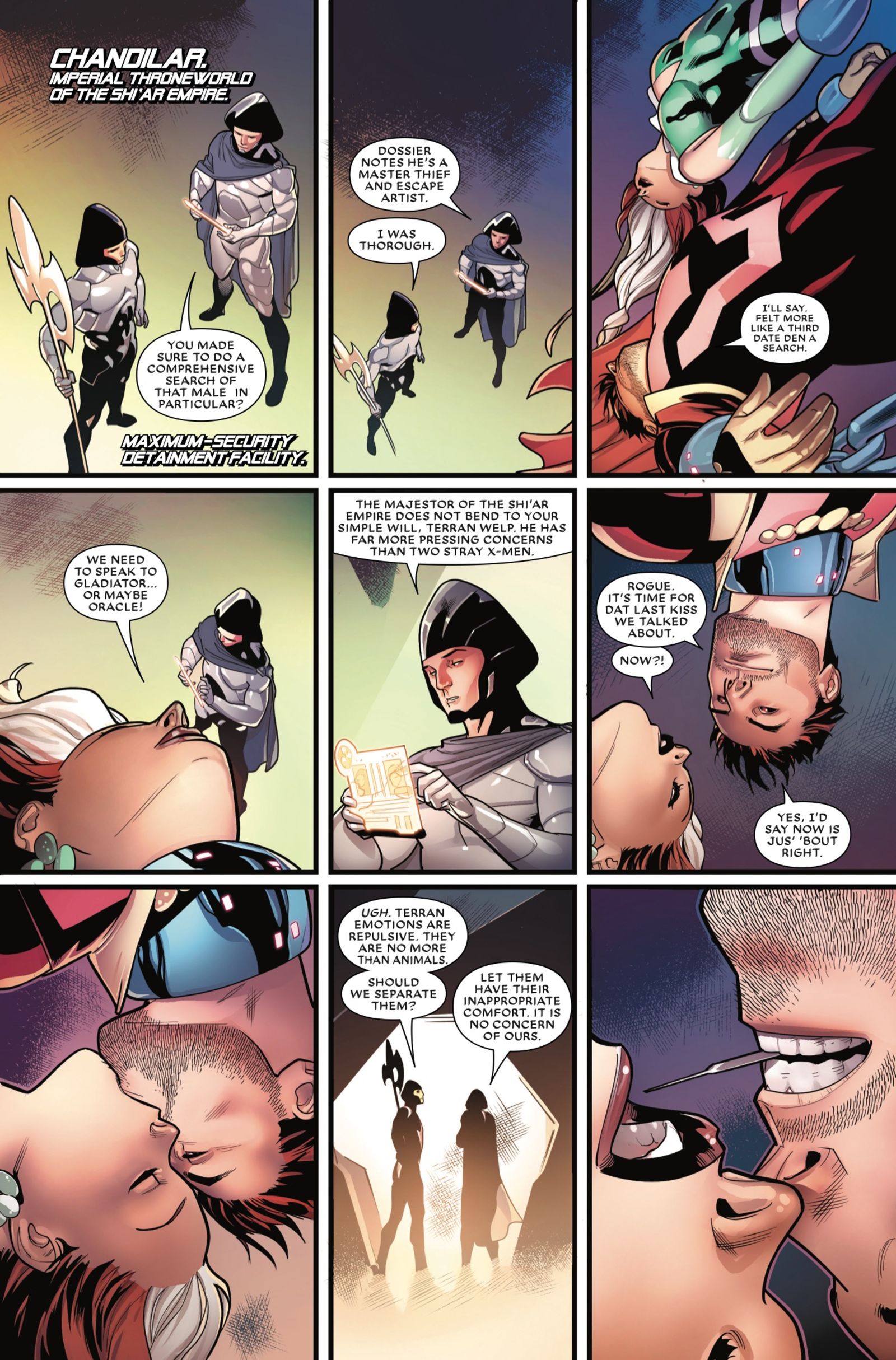 [easyazon_link identifier=”B07FPSFQTP” locale=”US” tag=”boundingintocomics-20″]Mr. and Mrs. X #4[/easyazon_link] opens up with Rogue and Gambit depowered, restrained, and dangling upside down. Nothing they haven’t seen before. We know they’re going to get free, but how Kelly and Oscar went about it is what makes this familiar predicament a blast to see resolved. So far, this run has held a certain sex appeal to it. No matter how many times we see these two kiss, it doesn’t get old. That’s a testament to Oscar’s fine illustrations and Kelly’s innuendo-brimming dialogue. Obviously, the couple escapes their cliché, unguarded cell. They are reunited with Xandra, the daughter of Xavier and former Shi’Ar Empress, Lillandra, but what came next is what really pulled me into the story (initially, anyway). The Starjammers! Yes, those sometimes freedom fighting, space hooligans (On a side note: I’m certain they’re the real inspirations behind the MCU’s version of the Guardians of the Galaxy). Sadly, this is also where I felt the book took a turn, but regrettably, not for the better.

The beginning was simply billiant but I found the last half or third of issue #4 a little disappointing.

Don’t get me wrong, the issue is fine. If you’ve been enjoying the series as much as I have up to this point, you’re probably not going to be bothered much, if at all. However, if you’ve been on the fence about Mr. and Mrs. X, this might be the tipping point for you. The beginning was simply brilliant, but I found the last half or third of issue #4 a little disappointing. Rogue is presented with an opportunity to correct something about her. While I wholeheartedly agree with her statement of wanting to tackle the issue on her own, I saw her attitude about it to be slightly over the top. 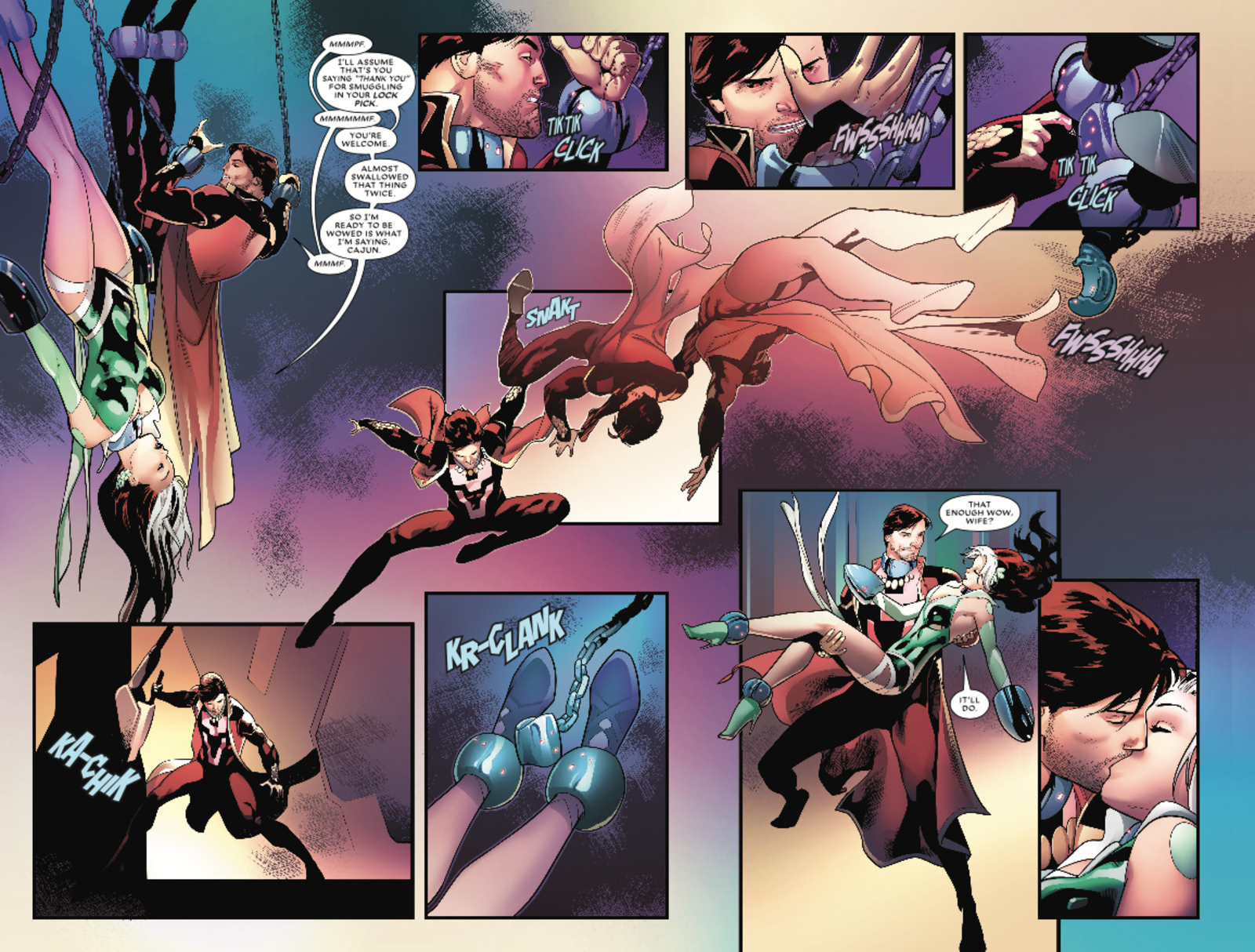 There’s a spot during an exchange with her husband, Gambit, where she basically tells him that he’s free to “walk away.” I’m not sure if that meant from the current situation or their very new marriage. If it’s the latter, honestly, it’s what I’d expect from a much younger individual during a heated argument. Definitely not something a person Rogue’s age would say during a low-temp disagreement, in my opinion. At the same time, I understand that Rogue, as a character, is still quite green, in terms of her relationship experience. So, I can chalk this up to a character-building moment which I hope is explored more in the future. They are still growing together, and I think it’d do both characters some good to learn that marriage is more than a fancy ceremony and the splitting of rent.

Around that time there’s also a big action sequence. The eagle-eyed readers will notice that Oscar Bazaldua successfully and rather beautifully reinterpreted a splash page from a classic early 90’s era issue of X-Men. With all the moving pieces and available toys at Thompson’s disposal, I believe it could have been much more dynamic. Unfortunately, we don’t often see the Starjammers in action. However, I trust we’ll get more of them in the next issue.

Kelly Thompson’s [easyazon_link identifier=”B07FPSFQTP” locale=”US” tag=”boundingintocomics-20″]Mr. and Mrs. X #4[/easyazon_link] started off masterfully good with a lot of really great moments between Rogue and Gambit. As always, Oscar’s art was on point throughout the book. Up until the halfway mark, there is nothing to really complain about. But again, that is where it began to run into some problems, not to mention it ends on a cliffhanger we basically saw in the first issue. Fans of the books will not be discouraged (as yours truly), but I encourage anyone on the cusp to just hang in there. Future solicits promise that this is going to continue to be a fun ride.