Comic book writer Mark Waid responded to allegations made against him after he launched a Go Fund Me campaign in order to raise funds for his legal defense. Waid is being sued for tortious interference and defamation by Richard C. Meyer who runs the Diversity & Comics YouTube channel.

“Some of you may be surprised at the amount of harassment and “Mark Waid non-fan fiction” being posted in the GoFundMe comments section. I’m reasonably sure that most GFMs don’t attract trolls.
(Here’s a short list of the things I’ve learned about myself by reading the comments: Apparently, I’m a millionaire. Evidently, I was once in business with an African-American woman. I’m surprised to learn that I made some phone calls to some unnamed university in Scotland and got a woman thrown out three weeks before graduation–AND drove her unnamed husband to three suicide attempts. AND it turns out I had a wife, so screw all of you for not sending me a wedding gift. There’s so much more, I’m tempted to publish it as an anthology stretch goal.)
I’ve deleted exactly one ugly comment, aimed at others. The rest, I’m leaving untouched so you can see for yourself the sort of hate and harassment I’m having to lawyer up against–and *I’m a straight white man.* This is nothing compared to what women, people of color, and the LGBTQ+ community receive every day from ComicsGate’s representatives. Think about that.
Read their comments. Pay attention to the language. It’s important to see for yourselves how these people react and what fiction they’ll throw at you when you take a stand against bigotry and for inclusivity. When you object to Black writers being called “race hustlers” whose writing is a “minstrel show.” When you call people out for comparing transgender people to “dog-faced boys” at the carnival “freak show.” I’m fighting a lawsuit that I strongly believe is designed to silence anyone who speaks out against that sort of prejudice. I’m fighting back. Please donate and PLEASE share. Let’s send a clear message that online harassment is unacceptable. Thank you.”

Waid was accused of abusive behavior by Shannon Pierce-Outlaw, who ran Alter Ego Comics with her husband Jason Piece. Mark Waid and his then-girlfriend Christina Blanch invested in the store in 2013. Pierce-Outlaw claimed there was a 9-11 tape where police were called to the store because Waid was destroying it.
Two years later there was a falling out and Pierce left the business. Alter Ego Comics would be rebranded as Aw Yeah Comics Muncie. Waid indicates he offered Pierce a “full buy-out” of the store, and indicated the store had debt troubles.
Ethan Van Sciver revealed earlier this week that there was in fact a 911 call. While he didn’t reveal the full 9-11 transcript, he did show the report, where it indicates that Mark Waid was tearing up the inside of the comic book shop.
https://youtu.be/QPkvyupkA9c?t=1685 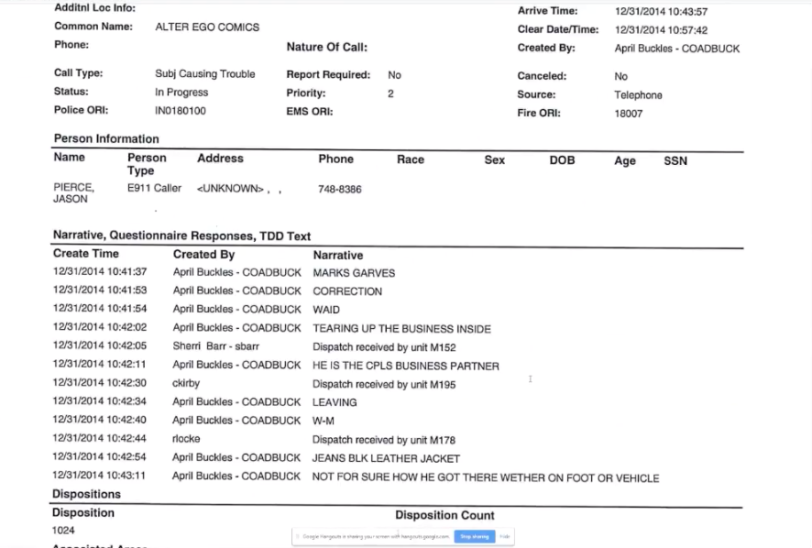 It’s interesting that Waid is trying to paint himself as the victim and the avatar of justice. He specifically states, “I’m fighting a lawsuit that I strongly believe is designed to silence anyone who speaks out against that sort of prejudice.”
Given this 911 call and what we know about Mark Waid’s actions in regards to Antarctic Press this looks to be just a gimmick in order to get more people to donate to his Go Fund Me. In fact, it’s clear Waid is trying to paint himself in the victim to do just that as he writes at the end, “I’m fighting back. Please donate and PLEASE share. Let’s send a clear message that online harassment is unacceptable.”
It’s truly galling to see someone who is being sued for tortious interference, meaning he’s being sued for interfering with a business contract he was not a party to, try to claim they are a victim of harassment.
Waid’s Go Fund Me has currently raised nearly $73,000 at the time of this writing.
What do you make of Waid’s response?