Actress Gwyneth Paltrow, who plays Pepper Potts in the Marvel Cinematic Universe, deleted her “tribute” to Marvel Comics legend and one of the greatest comic book creators of all time, Stan Lee.

Paltrow paid “tribute” to Lee after the Marvel Comics legend and one of the greatest comic book creators ever passed away at the age of 95. Paltrow took to Instagram and posted a picture of herself hugging Chris Pratt at the Avengers: Infinity War premiere. However, the photo also referenced the dress was she was wearing with a price tag of $615.00.

It gets worse, Paltrow’s “tribute” to Stan Lee appeared to be more of an afterthought as she drew attention to the photo by indicating the dress was for sale in her Goop shop.

Paltrow wrote, “For my pal who asked, this @retrofete dress now for sale in the @goopshop. Thanks for the hug @prattprattpratt.” “UPDATE: I just heard about Stan Lee, he will be so missed. What a genius, and always so lovely. True gentleman,” the actress added. 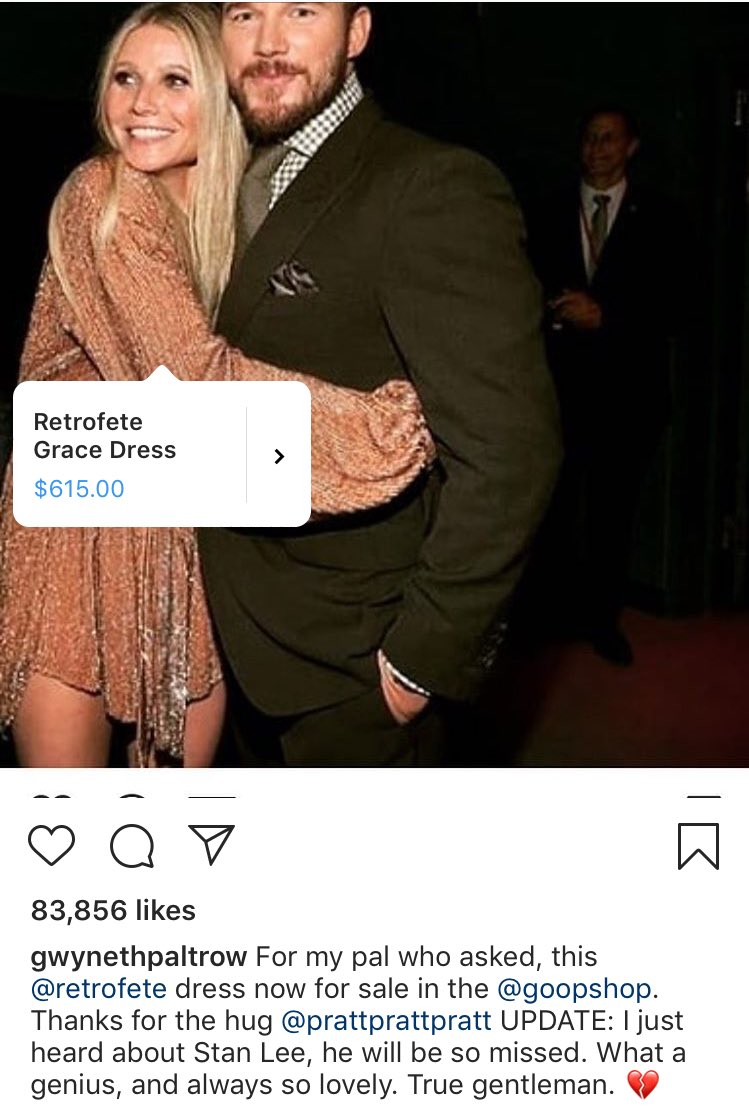 She couldn’t afford to do two posts?

She is rocking that dress AND the condolence message. So on brand.

I really don't understand why do people expect Hollywood celebrities to say smart things or even think like intellectuals, these people make a living by makings faces in front of the cameras

Unbelievable. “Buy my dress…oh and some bloke croaked.”

She knew that the words “Stan Lee” would be trending. It was poor judgement on her part and opportunistic. I’m not judging her as a person because we all do the wrong thing at times- but it was so grim. I’m sure the RTs alone are selling the dress. I like your world view! ✌️

While her tribute to Stan Lee definitely looks callous, she is a human and we all make mistakes. It’s quite possible she had just found out about Stan’s death as she was writing up her piece on the dress. Paltrow does use her Instagram quite extensively to market her Goop products, so it’s not out of the ordinary for her. However, it would have been prudent to market her dress and post a separate update honoring Stan Lee.

What do you make of Paltrow’s tribute to Stan Lee?