After sending out a survey to [easyazon_link identifier=”B07D7FTVKH” locale=”US” tag=”boundingintocomics-20″]Battlefield V[/easyazon_link] players, EA/DICE announced they would be making changes to their Time to Kill values because they believe players are no longer playing the game because “the wider player base is dying too fast.”

The survey went out to what EA/DICE considered “random” players. One of those “random” players happened to be HeelvsBabyface, a well-known YouTuber. He broke down all of the survey questions which included questions like, “How likely are you to continue playing Battlefield V in 30 days?” They also asked about trash talking and whether winning means winning even if you cheat or buy boosters in an obvious look at the prevalence of pay-to-win loot boxes that have taken over the gaming industry.

You can catch the video below:

Maybe the most relevant question at hand to EA’s most recent change to Battlefield V is whether or not you will continue playing in 30 days. If their player base doesn’t plan on continuing to play the game, EA/DICE won’t have the opportunity to sell them anything in-game.

And that thinking definitely appears to be top of mind with their most recent changes to their time to kill. Battlefield V Global Community Manager Dan Mitre took to the Battlefield V subreddit to explain the changes to Time to Kill and why they were being implemented.

“Recently we announced that Battlefield V’s TTK (Time to Kill) values will be changing in order to faciliate a more even gameplay experience for all of our players, resulting in a more level playing field for new and experienced players alike.

It’s widely accepted within the community that the current TTK values feel ‘dialed in’ or is ‘perfect as is’, and that the elements that need to change are those that impact TTD (Time to Death), such as netcode, health models, etc. It’s important to note that both TTK and TTD are closely intertwined. Making one change to TTK directly impacts TTD, and vice versa. “But, why futz around with TTK when it’s ideal at its current state?” Although not extremely vocal within our deeply engaged community, we see from our game data that the wider player base is dying too fast leading to faster churn – meaning players may be getting frustrated with dying too fast that they choose not to log back in and learn how to become more proficient at Battlefield V. Changing TTK values in addition to improving TTD elements will help these particular instances and hopefully result in better gameplay experiences for players of all skill levels.”

It’s key to point out that Dan Mitre admits this change has not been demanded by the community, “Although not extremely vocal within our deeply engaged community, we see from our game data that the wider player base is dying too fast leading to faster churn – meaning players may be getting frustrated with dying too fast that they choose not to log back in and learn how to become more proficient at Battlefield V.”

In fact, Mitre seems to be completely shooting in the dark about what the real reason for why people are no longer playing Battlefield V as he says, “players may be getting frustrated.” It’s quite possible people are quitting Battlefield V because they simply don’t like the gameplay or are more interested in other shooters like Fortnite and Call of Duty.

Nevertheless, the goal behind this change appears to be bringing in the loot, literally. I can only speculate but it appears that that EA/DICE have identified players they believe are more to spend money on in-game transactions. It makes sense they would rather cater to a more casual player who is looking to catch-up via in-game transactions than hardcore players who are able to unlock things through sheer time and skill.

As you could imagine in today’s world of micro-transactions and triple AAA publishers unable to go a week without getting egg on their faces, fans of the Battlefield franchise didn’t take well to the changes. And they made their frustrations known.

I am constantly surprised at how little publishers know about the player base. Why? Especially with online games, all the info is out there from what we play, to when we play, to how long we play. Study and data mine. Learn and create better games.

And things didn’t get better. YouTuber Ascend Vintax, a PC Battlefield player, also condemned the changes. In a series of Tweets, he railed against EA/DICE and the numerous problems that have plagued the game which included a delayed release date, numerous technical issues, and maybe the biggest offender was when a former executive actually told potential consumers not to buy the game.

One common thread from these players is the fact that the developers at EA/DICE don’t seem to understand their player base. 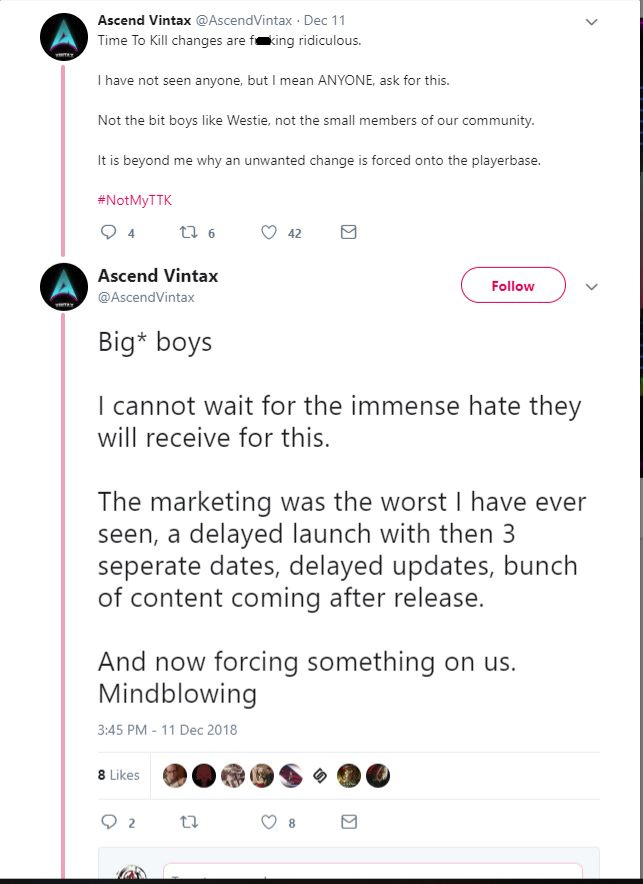 I hope the hate and community reponse will open their eyes

It’s not to say that EA/DICE isn’t pouring money into marketing for this game. Just take a look at this paid ad from the Instagram of Amanda Cerny. Talk about cringe.

What do you think? Is EA/DICE just unable to communicate with their player base? Or is there just another issue that is plaguing this franchise? Let me know what you think in the comments below!